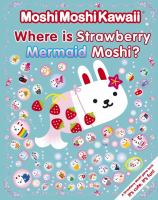 Where is Strawberry Mermaid Moshi?, by Moshimoshikawaii

Lego, Star Wars, Lego StarWars! This top ten has a definite theme going on. Minecraft is proving popular as you all go building your worlds out there. There are even Minecraft libraries!

Minecraft has entered the ranks for Children’s imagination building. Lego and Star Wars have got competition!

7.  Ripley’s believe it or not! Edited by Rosie Alexander

Lego Fanatics, brace yourself… Lego Mania is back on the kids blog with two awesome books for your entertainment, to inspire your Lego creativity… and addiction.

Hands down, Lego Bricks has been the best thing since sliced bread!

The Official Lego Annual 2015. This book is… in a word… so cool! Jam packed with puzzles, activities, super stories and much more. This book is your one stop shop to Lego entertainment. A must have read for all you Lego fans!

LEGO legends of Chima character encyclopedia. Venture into the exciting world of LEGO Legends of Chima and discover everything there is to know about this mysterious land, plus collect your new and exclusive minifigure. Another must have read for you Lego fans… and Legends of Chima fans.

Even a tiny spark of rebellion can ignite a blazing inferno, well this exciting new Star Wars book proves that theory correct. Prepare to return to a galaxy far, far away… because Wellington City Libraries is in possession of the new Star War Rebels: The Visual Guide, which takes you back to the very beginning of the epic struggle between the empire. This book doesn’t fail to disappoint with its jam packed knowledge about new daring heroes, sinister villains, never before seen vehicles and exciting new worlds, Ooh! I am tickled pink with excitement! A must have read for all you Star Wars fans… you might have to tear it out of my hands first, haha!

On September 13, the All Blacks take on the Springboks – their last game in New Zealand before next year’s Rugby World Cup. Why not check this awesome second edition of World Rugby Records in preparation for both events. World Rugby Records is a unique celebration of rugby excellence, featuring not only a host of records from teams and tournaments around the world (in all the game’s formats), but also the stories behind them and a series of potted biographies on some of the greatest players ever to have played the game. Great for anyone who is a fan of Rugby World Cup.

LEGO is still popular lending from the non-fiction collection!

4.   The LEGO book by Daniel Lipkowitz

6.   The LEGO movie by Hannah Dolan

8.   The Usborne book of famous artists by Ruth Brocklehurst

2.   Ripley’s believe it or not! by Rosie Alexander

2.  Ripley’s believe it or not! edited by Alexander, Rosie.

4.  The LEGO book by Daniel Lipkowitz

7.  The LEGO movie by Hannah Dolan

8.  See inside the First World War by Rob Lloyd Jones

Here are the most popular non-fiction books for this month. Looks like a couple of Christmas ones from December have sneaked into the list too!

6. The LEGO book by Daniel Lipkowitz

The Strawberry Moshi collection, by

I loved the book and I love when I find strawberry moshi. I like all the pictures. I love everything in the book!