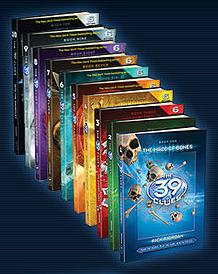 So you like The 39 Clues series? You were sad when it ended? You want more?

Get excited because there is a new 39 Clues series coming out this year.

The Cahill family thought they were the most powerful family the world has ever known… but they were wrong! The Vespers have been waiting in the shadows and now it’s their time to rise.

Boy vs Beast: Battle of the Borders #8: Volcan by Mac Park

This is a great book for the shoe level (Easy to Read). 4 stars.

Review by Aaryan of Karori

The Bad Beginning: A Series of Unfortunate Events #1 by Lemony Snicket

I like this book because it has sadness, happiness and funniness. It is also a series. You can find them at the  Library. I think you will love this series if you read the first book. 5 stars.
Review by Kitana of Kilbirnie

1 ) Artemis Fowl and the Atlantis Complex  Eoin Colfer (up 9)

2 ) Percy Jackson and The Lightning Thief   Rick Riordan (down 1)

5= )Percy Jackson and the Last Olympian  Rick Riordan (down 2)