Here are some new junior comics that have just arrived at Wellington City Libraries! Head on down to your local library and grab these awesome reads just in time for winter!

Time to get your super sleuth on with the InvestiGators, Mango and Brash, sewer-loving agents on their first mission together, who have not one but two mysteries to solve! Can Mango and Brash uncover the clues, crack their cases, and corral the crooks–or will the criminals wriggle out of their grasp? Overall a very humorous read!

“Join Snoopy and the rest of the Peanuts gang as he seeks new milestones in the space race! Even though the first moon landing was 50 years ago, Snoopy has a bold new mission: to be the first beagle in space! Join Snoopy as he sets out on his ambitious quest, while also leading Woodstock and friends as a Beagle Scout and keeping the company of his owner, the round-headed kid Charlie Brown.”–Publisher’s website. 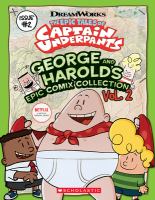 Lovable series, Captain Underpants returns with another comic to entertain fans far and wide. “This second collection features even more of George and Harold’s hilarious comix from the first three seasons of the TV show — nearly 200 pages of comics total! Each epic adventure features a brand-new villain from the hit Netflix TV series.”–Provided by publisher.

If you love adventure, animals, outer space and just about anything in between, this is the book for you! Join Rocket Racoon and Groot in weird and wacky adaptation of Marvel’s Guardians of the Galaxy as you have never seen it before!

“Ebo is alone. His brother, Kwame, has disappeared, and Ebo knows it can only be to attempt the hazardous journey to Europe, and a better life, the same journey their sister set out on months ago. But Ebo refuses to be left behind in Ghana. He sets out after Kwame and joins him on the quest to reach Europe. Ebo’s epic journey takes him across the Sahara Desert to the dangerous streets of Tripoli, and finally out to the merciless sea. But with every step he holds on to his hope for a new life, and a reunion with his family”–Provided by publisher.

“Meet two wonderful young girls who happen to be sisters-Maureen, and her older sister Wendy. Both are full of personality and a strong sense of independence. So while they may love each other with all their hearts, it’s not always easy for the two of them to be together. After all, when we’re still very young, age differences are much more meaningful. While Maureen may want to hang out with her older sister, nothing could be more embarrassing for Wendy. See how despite all odds, they still manage to get through each day without killing each other… well, at least so far!” — publisher’s web site.

Beach vacation with the Sisters! But can their parents stop Wendy from burying Maureen in the sand… permanently?!

“In their second adventure, Stig and Tilde once again find themselves shipwrecked on a mysterious island. This time, after their shipwreck, Stig & Tilde are welcomed by a pack of feral wolves! With only each other as backup, will they make it out unscathed? Find out in the next exciting adventure!”–Provided by publisher.

Rattle your dags, boys and girls and feast your eyes on an oldie but a goodie Kiwi Classic and childhood favourite of mine that comes to the small screen in the form of Footrot Flats: A Dog’s Tale. Featuring the characters from the late Murray Ball’s “Footrot Flats” – New Zealands most beloved local cartoon strip. Join Dog, Jess, Wal, Cooch, Horse, Major, Rangi, Pongo, Cheeky and “those bloody Murphys” , where Dog goes on ‘a journey of a thousand miles’, and an epic adventure. You will bear witness to his first encounter with the sexy Jess, his loyal devotion to Wal Footrot, whom he saves from a fate worse than death; his adventures with Horse, the cat with the barracuda jaw and fishhook claws; his brilliant cowardice and mighty nose, pitted against the dastardly schemes of the villainous Murphys, their hell hounds and the Croco Pigs.

This film will also keep you entertained and glued to the small screen. Not to mention it’s jam packed full of Kiwi words, sayings and slang and references to Kiwi culture! The soundtrack, by Dave Dobbyn is mind blowing filled with famous popular Kiwi classics such as Slice of Heaven and You Oughta to be in love. Overall this film is VERY FUNNY! I laughed all the way through, especially during the part where Wal is serenading Cheeky with a love ballad  aka You Oughta to be in love, (see youtube clip down below!), Dog gets ambushed by an army of rats and the battle to the death with the deadly croco-pigs!

A film that can be enjoyed by all ages and a great film to watch with the family over fish and chips on a Saturday night. 6/10 all the way!