Head on down to the library and check out the latest shipment of junior comics and graphic novels!

Get your hands on them before Christmas!

Dinosaur Explorers: Lost in the Jurassic.

Joined by a new companion, the Dinosaur Explorers return to the Jurassic period, when the first non-dinosaurs begin to emerge — and start looking for dinner! 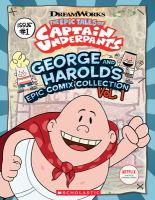 George Beard and Harold Hutchins are back with original new comic adventures starring the world-famous Waistband Warrior, Captain Underpants! This collection features George and Harold’s hilarious comix from the first two seasons of the TV show.

Nick Fury has declared Miles Morales a super hero; now, it’s time for that super-hero rite of passage: the team-up! But the new Spider-Man’s first team-up couldn’t possibly be with the Prowler, could it? It will be if it’s up to Miles’ Uncle Aaron, who’s not above resorting to threats to get his way. But Miles isn’t going to take such manipulation lying down, setting up a titanic battle of wills between uncle and nephew – with the Scorpion caught in the middle! Miles Morales has the powers. He has the costume. Now, he even has the web-shooters. With aid from Peter’s former girlfriends, Gwen Stacy and Mary Jane Watson, Miles confronts the dark side of the Parker legacy. And as his life is turned upside down once again, he learns that – for Spider-Man – with great power there also comes great tragedy.

Sonic the Hedgehog. Vol 2. The fate of Dr. Eggman.

Following their last battle, Dr. Eggman’s been mysteriously absent from Sonic’s life. What shocking secret will Sonic discover when he learns the bad doctor’s whereabouts? Plus, Sonic isn’t the only one looking for Eggman–so’s his old frenemy Shadow the Hedgehog! There are twists and turns in the course of this high-speed, action-packed mystery-adventure! But with a little help from his friends–including a new ally–Sonic’s fast enough to overcome any obstacle! Collects issues #5-8 of the ongoing series.

Meet Bigby, a curious bear with a big appetite … for adventure! Join him and his furry friends as they explore nature’s wonders and engage in silly experiments of all kinds. Young or old, everyone can learn a thing or two from Bigby Bear and his extraordinary view of the world!