The Wahine disaster / Corlett, Shirley
“When Debbie’s grandmother gives her a copy of her forefather’s old sea journal, she finds it fascinating. While Debbie’s own diary tells of 1960s school life and troubles with her friends, excerpts from the diary of 1841 tell of the hardships of life on an emigrant sailing ship. At home, sick with glandular fever, Debbie feels transported back in time. Is it the fever, or is her long-dead relative trying to tell her something? Following a trip to the South Island to visit relatives, Debbie boards the ferry to return home to Wellington. It is April 1968. The ferry’s name is Wahine…” (Catalogue) 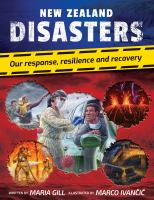 New Zealand disasters : our response, resilience and recovery / Gill, Maria
“Inspiring stories of courage, resilience and determination in the face of disaster. New Zealanders have endured phenomenal natural and human disasters throughout the ages. This inspiring book documents some of these key moments in our history and, more importantly, how we responded and grew stronger; what changes/improvements were made as a result. Cyclones, tornadoes, earthquakes, landslides, floods, volcanic eruptions, fires, plane crashes, pandemics and other disasters are just some of the many themes covered in this comprehensive, vibrantly illustrated account. Includes: Outcomes, Safety Tips, and What to Do in an Emergency.” (Catalogue)