Spring on down to your local library and check six new junior comics added to the collection.

Three monster brothers get into trouble in a wacky adventure to save their failing pizza parlor!

Red Panda and Moon Bear are used to handling lost cats and bullies, but they will need some new friends to deal with ghosts, robots, and alien invaders. The white snake : a Toon graphic.

Young Randall dreams of adventures until one day he’s sent off on a mission to discover the neighboring king’s secret. When he returns, he’s thrown in a dungeon and despairs until Princess Tilda — the power behind the throne – entices him to compete for her hand. Courage, determination — and Tilda’s trust in him – toss him from one adventure to the next as he dives for a ring at the bottom of the ocean and searches for a Golden Apple from the Tree of Life. BEN NADLER’s modern version in comics highlights the timeless truth at the heart of this Grimm Brothers’ fairy tale in a way that is sure to delight and resonate with today’s young readers.

Tyler is your everyday kid whose life is changed when his family has to move from the town he’s always known. Thankfully, Tyler has a strong group of friends forever linked in the world of Minecraft! Tyler, along with Evan, Candace, Tobi, and Grace have been going on countless adventures together across the Overworld and are in need of a challenge. They decide to go on the Ultimate Quest — to travel to the End and face off against the ender dragon!

RuinWorld : eye for an eye.

Adventurers Rex and Pogo trek across the Ruinlands searching for treasure and magical artifacts, along with their not always faithful companions. It’s every adventurer for themselves in the Ruinlands! Join Pogo and Rex as they set out on a quest to hunt for valuable artifacts and magical weapons across the land. Along with plenty of not always faithful companions, our heroes must battle dangerous tribes of Toadies, survive giant stone Golems, and stop a catastrophic world-ending disaster, all while evading a cunning gang of thieves trying in a race to the biggest treasure of all time. Cartoonist Derek Laufman (Marvel Superhero Adventures) leads an unforgettable journey as Rex and Pogo misadventure their way across the Ruinlands, facing dangerous foes and fair-weather friends alike!

When Zomboss sets his sights on destroying the yards in town, it is up to the daring duo, along with Crazy Dave and his band of plants, to thwart his plans and claim victory once again!

When Jack Skellington’s faithful pet Zero gets lost, the ghost pup must get the help of the residents of Christmas Town to find his way back. With Halloween plans on hold while Jack mounts a search, will they be reunited in time to save both holidays? 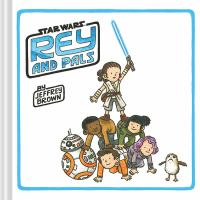 What if Rey had not grown up alone on the dusty planet of Jakku, but instead had a galaxy of friends to share her adventures, all under the watchful eyes of Luke, Leia, Han and Chewie?

We are all me.

A poetic and lyrical picture book, bursting with color, about our interconnected world, from self to cells and seeds to sky