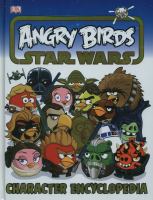 A long time ago in a galaxy far, far away…a group of desperate rebel birds faced off against the galactic menace: the Empire’s Evil Pigtroopers! Yep, the Angry Birds are back and now you can join them on an epic adventure in the legendary Star Wars Universe by reading this new character encyclopedia. Learn about cool characters like Red Skywalker, Peckme Amidla, Lard Vader and get the full low down on those dastardly pigs and very angry birds! Overall a great book to read if you are a fan of Angry Birds.

In the mood for more weird worlds of wonders? Rest assured, you can always count on Tony Robinson to deliver. Read his latest book on World War I and find out all the action-packed facts like how to build a trench, what dogs were good messengers, how plastic surgery was invented and why you needed a gas mask.  As always, Tony Robinson takes you on a headlong gallop through time, pointing out all the most important, funny, strange, amazing, entertaining, smelly and disgusting bits.  This is the book that makes World War I history fun to read about.

The Story of the First World War.

Need information on World War I for a homework project? Check out The Story of the First World War by Paul Dowswell. Contains eye-witness accounts of some of World War One’s most important events, including how the war started, the strange Christmas truce of 1914, the epic naval battle of Jutland Stories and when the war ended in 1918. This book also comes complete with maps and line drawings and there are notes on sources and ideas for further reading. Gripping and engaging for readers who prefer real life to fiction.