Almost all of Napier’s roads, houses and buildings were damaged or destroyed in the quake. Image: Hawke’s Bay NZ / Archive

2021 (3 February 2021, to be exact) marks 90 years since the Hawke’s Bay Earthquake, which occurred on the 3rd of February 1931. This earthquake devastated the cities of Napier and Hastings and goes down in Aotearoa’s history as our worst natural disaster to-date. The quake was measured at 7.8 on the Richter Scale with 256 deaths – 161 in Napier, 93 in Hastings, and 2 in Wairoa. Many thousands more required medical treatment. The following is an account of that terrifying day written by Annie Lascelles who was 8 years old at the time. Annie went on to have a long and interesting life, playing the piano until her death in 2019, aged 96… but I think you’ll agree that she had a lucky escape! Annie never lost her fear of earthquakes and would refer to Aotearoa as “The Shaky Isles”:

On the 3rd Feb. 1931 I set off for school, it being the first day of the 1st term at St. Joseph’s School (now Reigner School),
Greenmeadows (just 4 miles from Napier).  It was my first day in Standard 2 (year 4) – I remember it was a mild, slightly cloudy morning.  We had a new teacher, also as being a Tuesday I had taken my music.  The previous year it had always been my piano lesson at play time (10.40am).  With this in mind I was about to go over to the nun’s convent adjacent to the school.  This was a new two-storied brick building, erected about 12 months before. However, my friend Molly asked me to go over to the shop as she had to get some slate pencils (we used slates in those days, sort of like mini-chalkboards) so  I went, thinking I would go over and see my music teacher when I returned. Mr Russell’s shop was through the horse-paddock at the back (a few of the children used to ride horses to school).  Molly  spent half her money on the slate pencils, but the other half on an ice cream each!  We were heading back across the shingle road to school when the earthquake struck (10.47am).  We were both thrown to the road.  I remember looking along the road.  It reminded me of a rough sea with breakers coming in but instead of spray on the ridge of each wave it was dust and shingle.  Of course my ice cream was squashed into my new uniform, about which I was more concerned (what would Mum say!).  Mr Russell rescued us and we spent the next half hour clutching onto him, each had a leg I think – every time the quakes jerked and shook we pulled at his trousers!  After some time my Mum appeared.  Dad had rushed home from his work, hopped in the car and drove Mum down to see we were OK.  They found my four brothers but not me. Mum gave one look at the Sisters’ Convent which had collapsed like a pack of cards, and thought the worst (I can remember watching the convent crumble and the roof just sliding down over the top of the bricks, looking for all the world like a big tent top).  Also, there was so much noise from the quake, which seemed to be a continuous shake after the first 2 big shocks.  Fortunately, someone remembered seeing Molly and I going through the horse-paddock to the shop so no doubt Mum was pretty relieved to see me clutching Mr Russell’s trousers…but I was still concerned about the mess I had made of my uniform! 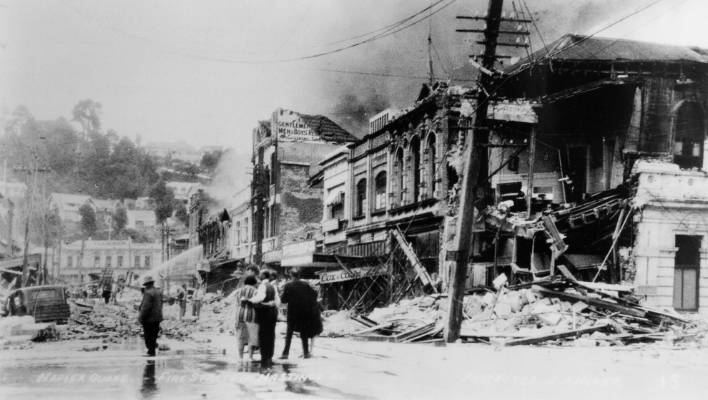 Napier burns post earthquake. It was thought that the fires started in two chemist shops in central Napier. Image: Stuff.co.nz

We were all  put in the dodge (a big black car, with side curtains) and drove into Napier to get my older sister who was having her first day at Sacred Heart College on Bluff Hill. I can remember Dad being concerned as the road kept opening up with cracks and closing again, he was afraid a wheel could become entrapped.

Only for the fact that trucks, Army I think, were transporting patients from the Napier Hospital out to the Greenmeadows Racecourse (now Anderson Park) we were able to follow the trucks on return, as the two bridges over a couple of river outlets had risen by quite a few feet and the soldiers were stacking timber up to fill the gaps to allow the trucks through and they beckoned us on.  We parked to the south of Clive Square as it was impossible to go further.  The town was ablaze and razed practically to the ground with firemen and hoses and rescuers doing what they could.  Mum and another brother had to follow the path up the side of the hill to approach the Convent that way.  They eventually came back with my sister and another girl who lived out our way (a sister of Molly, by the way).

At home the exterior looked OK but the chimney had moved about a lot.  Inside was chaos, cupboards emptied on the floor, jams, pickles etc. Just a mess; furniture pitched here and there, pictures fallen and smashed. It was impossible to use the coal range in the house for cooking, as with the chimney so damaged, it would be dangerous.  Dad made a temporary stove out in one of the out-buildings, erecting a pipe chimney through the corrugated iron roof, enabling Mum to cook food and boil the kettle.  No mean task I imagine, as there were six of us in the family.  Dad and the boys brought out mattresses and we slept in the garage for nearly six weeks while the house was made safe to live in again. We also brought our grandparents from Taradale out to live with us too.  They slept in a tent on the back lawn for a few weeks.  Their chimney had collapsed and went through the dining room table, which grandfather was following around the dining room during the worst of the initial shocks – he was underneath, but escaped injury.  Nana was confined to bed at the time.

We had an artesian well, fortunately, which never ceased running, so water was not a problem.

Want something to read?

Earthquake! : the diary of Katie Bourke, Napier, 1930-31 / McVeagh, Janine
On the day of her father’s funeral, 11 year-old Katie Bourke begins a diary. It is 1930 and New Zealand is in the grip of the Great Depression. Money is scarce and even basic necessities are hard to find. Katie describes how she longs to escape the boredom of school and do something to help her struggling family. Then a disaster happens which turns every body’s world upside down. (Catalogue)  END_OF_DOCUMENT_TOKEN_TO_BE_REPLACED