Over 107 years ago, young men from all over New Zealand and Australia (The ANZACs – Australian and New Zealand Army Corp) left on troop ships from the port of Albany in Western Australia heading for Egypt and then on to Gallipoli in Turkey, to fight in “The Great War,” “the war to end all wars” – World War 1. By the end of this bloody conflict in 1918, 16,000 New Zealand soldiers had died in battle and 41,000 injured. Many of these young men had enlisted in the army thinking that it would be an adventure of a lifetime. Friends and neighbours joined up together excited to be leaving what many saw as a boring life here in New Zealand!

This postcard, sent by New Zealand soldier, Edwin Bennett to his older brother Gifford shows that the adventure of a lifetime wasn’t what Edwin was expecting. Edwin was killed a month later on 16 April 1918. He was 20 years old. Dear Gif, Just a note to see if I can waken you up a little. I haven’t heard from you now, for some time. What about dropping a line or two. Letters are very acceptable here. How are you keeping? How is work? Well old chap you’re in a great position and a good home to go to and for God’s sake and Mother’s and Father’s sake look after it. I’m sorry I ever stepped across here. But well I did want to come, and I did, now I’ve found my mistake when it’s too late. I could of had another twelve quiet months if my head was firmly turned the right way. But still there is a happy day coming, when we’ll all be home again. Sitting round a nice cosy fire telling some of our experiences. Well old boy I must go. God bless you. Best love from your loving brother Ed. xxxxxx

Sometimes it’s hard to get our head around such big statistics like 16,000 deaths and 41,000 casualties, but when we read about individuals and their war experiences, it can be so much easier to relate to what they went through. Here are a couple World War 1 stories that are written from an individual soldier’s point of view: 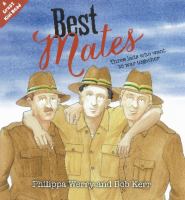 Best mates : three lads who went to war together / Werry, Philippa
“The three young soldiers in the story are best friends from school, and they leave New Zealand together to go and fight at Gallipoli. Landing first in Egypt, they travel by ship to Anzac Cove and dig into trenches to fight the Turkish troops holding the peninsula. Conditions are tough and Joe gets sick, but his mates help him off on the hospital ship. Then Harry is fatally wounded and his burial has to take place on the cliff-top, away from the snipers. The three friends are reunited many years later, when two men fly to Gallipoli and lay poppies on Harry’s grave. Taking her inspiration from Anzac Day, the New Zealand story Philippa Werry captures the essence of the Anzac spirit with her moving tale about mateship. The illustrated factual text on pages 30-31 spread provides extra information about the events pictured in the story.” (Catalogue) 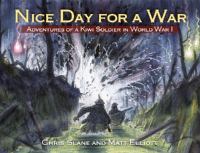 If you want to do some searching for family members who fought for New Zealand in World War I or World War II, the Online Cenotaph of the Auckland War Memorial is a great resource. You can even lay a virtual poppy on the wall of a loved one, or the UNKNOWN WARRIOR