In our March newsletter, new kids’ fiction and non-fiction, plus the most popular DVDs and comics this month, and YOUR reviews! Have a read:

Brand new year for the library! But the old favorites are still going strong in the junior comics section. Are any of these your favorites?

7. Asterix omnibus, by Goscinny and Udzero

Lego has a great DVD presence at the library. The Lego movie was ranked 18 so didn’t make the cut to the top 10 this month, but if you need more Legends of Chima check out these bloopers reels!

Okay, so we’ve decided it’s high time we did a round-up of the latest DVDs. Need something to watch once school is finished? Try one of the DVDs below!

Kung fu panda 2
“Po the Panda is now living his dream as The Dragon Warrior, protecting the Valley of Peace alongside his friends and fellow kung fu masters, The Furious Five. But Po’s new life of awesomeness is threatened by the emergence of a formidable villain, who plans to use a secret, unstoppable weapon to conquer China and destroy kung fu! Po must look to his past and uncover the secrets of his mysterious origins in order to able to unlock the strength he needs to succeed…” (We found this review on the Library Catalogue)

Cars 2
“Star racecar Lightning McQueen and the incomparable tow truck Mater take their friendship on the road from Radiator Springs to exciting new places when they head overseas to compete in the first-ever World Grand Prix to determine the world’s fastest car. But the road to the championship is filled with plenty of potholes, detours, and hilarious surprises when Mater gets caught up in an intriguing adventure of his own: international espionage!” (We found this review on the back cover)

Phineas and Ferb : the movie. Across the 2nd dimension
“When Phineas, Ferb, and Perry follow Dr. Doofenshmirtz through his ‘Otherdimensionator,’ they find themselves in an alternate universe where a second, truly evil Dr. Doof rules over his Tristate Area with an army of iron-fisted robots. To save his friends from certain doom, Perry makes the ultimate sacrifice by revealing his secret identity as Agent P. Phineas and Ferb escape, meet their 2nd dimension selves, and begin their own mission to rescue Perry” (We found this review on the Library Catalogue)

Star Wars. The padawan menace
“Tour guide Master Yoda leads a group of rambunctious Jedi younglings through Senate chambers when he senses a disturbance in the Force. Summoned to help save the Republic, he discovers that one of the younglings, Ian, has secretly boarded his ship– Meanwhile, C-3PO and R2-D2 are put in charge of the boisterous group and find themselves in over their heads. As the evil Sith prepare to wreak havoc, it’s up to Yoda and the Droids to ensure that their young charges aren’t torn to bricks” (We found this review on the Library Catalogue)

Need something to read when school’s finished for the year? Not to worry – we’ve got you covered! Here are some new books at the library – from the latest Astrosaurs book, to the Dragonology Chronicles and extremely disgusting Andy Griffiths stories!!

The forest of evil, by Steve Cole
Number 19 in the exciting Astrosaurs series!
“Noxia-4 is a farm-planet; a world of plants that feeds billions of hungry dinos. But when the harvest fails and the farmers are attacked, Teggs and the team investigate – and soon learn that the Noxia-4’s dark forests are home to a strange and deadly evil that could destroy them all…” (From the back cover) 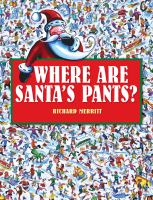 Where are Santa’s pants? By Richard Merritt.
Oh dear – it must be Christmas! Santa’s lost his pants and desperately needs them back so he can get started delivering presents! Help him find them on every page of this book! A fun puzzle book, sort of like Where’s Wally, but Christmassy.

The dragon diary, by Dugald A. Steer
Another book in the Dragonology Chronicles. Are you reading these yet? You’ll enjoy them!
“Fresh from recovering the Dragon’s Eye, apprentice dragonologists Daniel and Beatrice Cook eagerly await the hatching of the dragon’s egg in their care. But just as the shell begins to crack, their mentor, Dr. Ernest Drake, is called off to India to look for their missing parents and tend to the gravely ill naga dragons they’ve left behind. Meanwhile, the siblings receive a tip that the secret to curing dragons may lie in an age-old Dragon Diary, if only they could decipher it!” (We found this review on Amazon.com)

Killer koalas from outer space, by Andy Griffiths ; illustrations by Terry Denton.
And we saved the best for last!! Do we even need to tell you how awesome Andy Griffiths is? (*Grin*)
“This is a very silly book filled with very bad things. There are bad ideas like eating dead flies, and silly people like the boy who unscrews his head and loses it forever. Then there are very bad things like bloodsucking grannies, rocket-stealing ants and, of course, killer koalas from outer space that come to earth and rip off your face. A collection of stories from The Bad Book and The Very Bad Book that will make your brain EXPLODE!” (We found this review on the Publisher’s website)