Invasion of the Interwebs 2! Electronic Boogaloo! Revenge of the Digital Medium!

So, somehow you have managed to survive the hoards of phone wielding teens, being guided your way by the algorithms of multibillion dollar companies. They had bypassed all your defenses, the giant walls of pages and words, of knowledge and facts and all things that require effort. Books based on ș̴̗͌͋ö̶͈́͆c̴̭͐̆͜i̷̊͜a̷̤͂͝ĺ̵̰ ̷͔̂͂m̵͕̟̈́̃e̸̹̤̊d̶̮̆i̴̢̳̋á̶̩̬, disguised as normal literature, hiding among such important topics such as paint drying and car insurance. But you’re safe now, you have defeated them, surely now the library has been cleansed of the internet’s taint.

But you are wrong.

Not only has social media invaded, but other aspects of internet culture. But J’Shuall, great and almighty, how can there be more to the internet than social media? And you’d be almost right, but in the deep dark depths of the internet, beyond twitter and youtube lies something else…

Sometimes when people make cool things they want more people to see their cool thing, so they make it multi-media and do things like make a book. Then of course we librarians are summoned by the presence of dust and papercuts and find these books, and then like a bookwyrm on it’s hoard, collect these books. So on this episode of Invasion of the Interwebs we shall begin our exploration of these books.

Do you hate the convenience of being able to multitask? Do you desire to eschew the pleasures of modern life, go into the mountains and become a luddite? Are you adamant that everyone knows how erudite and cultured you are by reading books at any and every opportunity, especially in public? Yes! This is the section for you! Podcasts are a brilliant invention/format/hobby to experience literature in, you can learn about stuff, hear people talk about nothing for hours, and experience amazing new ways of storytelling. But let’s be honest, sometimes you just feel like reading a book that you don’t have to charge or detangle. A lot of very popular podcasts have been adapted into the form of books for widespread consumption, and here are a smattering of options. From supernatural stories to supernatural facts to supernaturally a family getting along well enough to run D&D (lots of supernatural stuff, not gonna lie) there’s something for everyone.

“Caleb Michaels is a sixteen-year-old champion running back. Other than that his life is pretty normal. But when Caleb starts experiencing mood swings that are out of the ordinary for even a teenager, his life moves beyond “typical.” Caleb is an Atypical, an individual with enhanced abilities. Which sounds pretty cool except Caleb’s ability is extreme empathy-he feels the emotions of everyone around him. Being an empath in high school would be hard enough, but Caleb’s life becomes even more complicated when he keeps getting pulled into the emotional orbit of one of his classmates, Adam. As he and Adam grow closer, Caleb learns more about his ability, himself, his therapist-who seems to know a lot more than she lets on-and just how dangerous being an Atypical can be.” (Adapted from Catalogue)

“They live in shadows–deep in the forest, late in the night, in the dark recesses of our minds. They’re spoken of in stories and superstitions, relics of an unenlightened age, old wives’ tales, passed down through generations. Yet no matter how wary and jaded we have become, as individuals or as a society, a part of us remains vulnerable to them. In this illustrated volume, the host of the hit podcast Lore serves as a guide on a fascinating journey through the history of these terrifying creatures, exploring not only the legends but what they tell us about ourselves …”– Amazon.com.” (Adapted from Catalogue)

“From the creators of the wildly popular Welcome to Night Vale podcast comes an imaginative mystery of appearances and disappearances that is also a poignant look at the ways in which we all struggle to find ourselves…no matter where we live. Located in a nameless desert somewhere in the great American Southwest, Night Vale is a small town where ghosts, angels, aliens, and government conspiracies are all commonplace parts of everyday life. It is here that the lives of two women, with two mysteries, will converge.” (Adapted from Catalogue)

“Keisha Taylor lived a quiet life with her wife, Alice, until the day that Alice disappeared. After months of searching, presuming she was dead, Keisha held a funeral, mourned, and gradually tried to get on with her life. But that was before Keisha started to see her wife, again and again, in the background of news reports from all over America. Alice isn’t dead, and she is showing up at every major tragedy and accident in the country. Following a line of clues, Keisha takes a job with a trucking company, and begins searching for Alice. She eventually stumbles on an otherworldly conflict being waged in the quiet corners of our nation’s highway system–uncovering a conspiracy that goes way beyond one missing woman.” (Catalogue)

The Adventure Zone [1] : here there be gerblins / McElroy, Clint

“Join Taako the elf wizard, Merle the dwarf cleric, and Magnus the human warrior for an adventure they are poorly equipped to handle AT BEST, guided (“guided”) by their snarky DM, in a graphic novel that, like the smash-hit podcast it’s based on, will tickle your funny bone, tug your heartstrings, and probably pants you if you give it half a chance.” — Amazon.com.” (Catalogue)

A Whole Section on Ducks and Drakes, Because I am a Nerd and it’s My Post

Wow shock horror the guy with the fantasy inspired name likes dungeons and dragons, who woulda thunk. So, Critical Role, online sensation where a bunch of voice actors make funny voices and pretend to be fantasy heroes, kinda big. You can now find so many different books involving the world of Exandria, and so many different kinds. Wanna turn off your brain and see the cool action scenes? Boom! Comic! Wanna read more stories of the characters you know and love? Boom! Novel! Wanna know about behind the scenes info? Boom! History Book! Wanna see all these beautiful descriptions realised visually? Boom! Art Book! Wanna play in Exandria, in your own home game! Bam! Official source book by Wizards of the Coast!

Truly there is no better time to be a basement nerd, don’t you agree?

“The band of adventurers known as Vox Machina will save the world. Eventually. But even they have to start somewhere. Six would-be heroes on seemingly different jobs find their paths intertwined as they investigate shady business in the swamp town of Stilben. They’ll need to put their heads–and weapons–together to figure out what’s going on… and keep from being killed in the process. Even then, whether or not they can overcome what truly lurks at the bottom of the town’s travails remains to be seen!”–Provided by publisher.” (Catalogue)

“The drama of Dungeons & Dragons has come to brilliant life via the epic stories played out live on the hit streaming show Critical Role. Now the adventures take all-new twists and turns in the first official novel based on characters from the popular series. Kith & Kin will follow a brand-new story, featuring the cunning ranger Vex’ahlia and the conning rogue Vax’ildan (and, of course, Trinket) years before they meet Vox Machina. “– Provided by publisher.” (Adapted from Catalogue)

The world of Critical Role : the history behind the epic fantasy / Marsham, Liz

“A guide to the massively popular fantasy RPG livestream offers previously unreleased photos and artwork, sharing cast insights into its origins and storylines as well as the diverse array of art and cosplay that Critical Role inspires.” (Catalogue)

The Chronicles of Exandria : the Mighty Nein

“Journey through Wildemount alongside the motley group known as the Mighty Nein! Encompassing the first chapters of Critical Role’s second campaign, this tome illustrates the adventures of our unlikely heroes as they meet in Trostenwald, struggle through a heartbreaking encounter with the Iron Shepherds, and more.” (Catalogue) 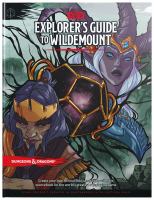 “Create a band of heroes and embark on a journey across the continent of Wildemount, the setting for Campaign 2 of the hit Dungeons & Dragons series Critical Role. Within this book, you’ll find new character options, a heroic chronicle to help you craft your character’s backstory, four different starting adventures, and everything a Dungeon Master needs to breathe life into a Wildemount-based D&D campaign?- from Amazon.” (Adapted from Catalogue)

The Wellington Comic Lover’s Guide to… Avatar: The Last Airbender