We haven’t done a Trailer Tuesday in a while! So let’s get right down to it with space battles, some dystopias and a tearjerker.

First: Guardians of the Galaxy. It’s out already so you can go see it any time you like! It’s the newest installment in the Marvel universe and we get introduced to a whole gang of new characters we’ve never seen before. And it’s in space! With awesome ships, battles and creatures. If you watched to the end of the credits of Thor: The Dark World (which is something you should know to do if you’re a Marvel movie fan!) you may recognise The Collector in GotG. This movie is a lot of fun, but you definitely don’t need to be a Marvel fan to enjoy it. If you read the comics though (which we have in our collection!) there are plenty of insider goodies for you to spot in this film too.

Following on from the President-Snow-addressing-the-Capitol teasers, the new teaser trailer for Mockingjay Part 1 has been released! It features Katniss leading the rebels against the Capitol, and I expect a lot of tears to be shed watching this movie. If you’d like to refresh your memory of what happened in this book, you can reserve it here. Mockingjay Part 1 will be released on November 20th 2014. See you at the premiere!

Next up is the newest trailer for The Maze Runner starring Dylan O’Brien who you may recognise from Teen Wolf. It follows Thomas, who wakes up in a glade surrounded by a colossal maze. He has no memories of his previous life or how he got to the glade except for his own name. Each day boys from the glade venture into the maze to try and find an escape, but the gates close every night to keep the horrific Grievers at bay. If the maze “runners” aren’t back by the time the gates close at night, well, “no one survives a night in the maze”. Thomas joins the runners, determined to find an escape from the maze, but is he ready for the truth? This one looks like it is going to be epic on the big screen and I can’t wait to see it! Check out the trailer below and read the book while you’re waiting for the movie, if you haven’t already.

And finally is If I Stay, an adaptation of the book of the same name by Gayle Forman. Mia is a talented seventeen-year-old cellist with family, friends and a boyfriend. But a car crash sends Mia into a coma, and she has a sort of out-of-body experience observing the lives of those she loves. Mia has to decide whether she should stay, or go forever. Check out the book here and keep the tissues handy!

You probably know all about The Hunger Games and Divergent by now, right? And if you’re anything like me, they hooked you right in and you just can’t get enough of those dystopian wastelands. So future, much wow. There are heaps and heaps of really great dystopian novels which lurk in the shadows of their better-know literary cousins, but I’m here to shine a spotlight on a few of them.

“In 2036 New Jersey, when teens are expected to become fanatically religious wives and mothers or high-priced Surrogettes for couples made infertile by a widespread virus, sixteen-year-old identical twins Melody and Harmony find in one another the courage to believe they have choices.” (from library catalogue)

The first in a trilogy, as dystopias tend to be.

In 2050, Pastworld is a Victorian London themed park where teenaged Caleb meets 17-year-old Eve, who knows nothing of modern life outside Pastworld. They both become entangled in the diabolical plans of a murderer, revealing disturbing facts about the muddy origins of both Caleb and Eve’s lives.

Life As We Knew It, Susan Beth Pfeffer

A meteor hits the moon, throwing it ever so slightly out of sync and causing disastrous havoc for everyone on Earth. Tsunamis, earthquakes and eruptions interrupt every day life what with the moon being out of whack. Told through the diary entries of 16-year-old Miranda, Life As We Knew It explores the struggle of Miranda and her family to survive through this catastrophe.

Cinder crosses a classic fairytale with cyborgs… Cyborg-ella! Cinder is a gifted cyborg mechanic living in New Beijing. She is reviled by her stepmother and blamed for her stepsister’s sudden illness. But when her life becomes entangled with Prince Kai’s, she finds herself forced to confront her own past in order to protect Earth’s future.

Teenage Nailer works as a “ship breaker” scavenging copper from grounded oil tankers. But when he finds a beached clipper ship with a girl aboard, Nailer must decide whether to strip the ship of its worth, or save the girl inside. This one is gritty and harsh and completely action-packed. It also has a follow-up companion novel called The Drowned Cities which takes place in the same universe.

There are so many out there, what are your favourite dystopias?

Is out, and it looks gripping!

We at the teen blog like fiction and fashion, so when you put them together you get a winner. We do love the Catching Fire couture photos that have cropped up recently. Even the chairs are awesome. Finnick looks piratical (<3 the word piratical, any excuse to use it), and we’re not sure whose dress is better, Johanna’s or Katniss’ (which looks like it’s part-weapon). Stuff informs us that Effie is wearing Alexander McQueen. Here’s Perez Hilton on the topic.

Also, make sure you re-read the book while you wait for the first teaser trailer. The movie website (complete with impressive flaming logo) is here.

The Hunger Games are on DVD

Let the games begin! The Hunger Games is released on DVD today, and we’ve got it! Right now, in fact. Reserve your copy (80 cents for one week on a young adult card) and it will wend its way to a reserve shelf at a library branch near you fairly shortly.

The 2 disc set contains extras including:

We also have a superdeluxefantastic three disc set (in the general DVD collection, so $4.00 for one week) with extra extras:

Quick, you guys! You only have until 5:30pm today to enter the Hunger Games quiz on our Facebook page! Someone will win the $100 iTunes voucher today – if you click some buttons and type in your name and library card number it could easily, easily be you.

Follow this link, then follow the instructions on the page to be in with a chance to win.

While you’re on our Facebook page, don’t forget to “like” it, there’ll be more quizzes coming soon and this is the best way to hear about them.

In Isn't that cool?, Vic Ferrari

Have you entered the Hunger Games quiz over on our Facebook page yet? There are ten multi-choice questions to answer, get them correct and you’ll be entered into the draw to win a $100 iTunes voucher. You can enter as many times as you like to shoot for 100% (only one correct entry per person though) and all YA cardholders are eligible. Entries close at 5:30pm on Monday June 18, so there is still plenty of time left.

The quiz can be found along the top of the page, just underneath the cover photo. Here is a picture that shows you exactly where:

Here is a sample question to try:

We’re very excited to bring you a Hunger Games quiz via our Facebook page and even more excited to give away a $100 iTunes voucher for the winner!

Correctly answer the questions carefully compiled by the Teen Blog Quiz Committee, supply your name, YA library card number and email address and you go into the draw. Tell your friends to enter too. Tell them to like the page as well, ok?

You’ve got until 5:30 pm on Monday June 18 to submit your answers. The draw will take place on Tuesday June 19 and we’ll let you know as soon as we can after that who the winner is! 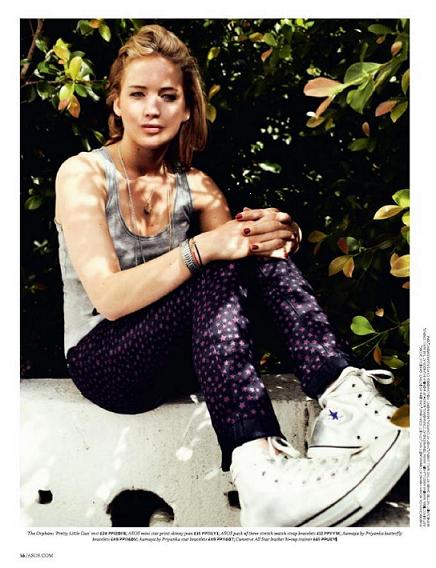 No, I haven’t been completely ignoring The Hunger Games – the biggest teen phenomenon since Twilight – I’ve just been waiting for the right fashion-related news.  Finally the star of the movie, Jennifer Lawrence, has provided it by becoming quite the red carpet star!  And as the movie opens next week I’m sure there’s going to be lots more glamourous Jennifer pics to ogle.

There have been images of the actual movie fashions or costumes leaked onto the internet too.  I can’t show you the actual images, but here’s a link.  Also, someone kindly directed me to this – a very comprehensive post about a range of Hunger Games nail polishes called Capitol Colours.  Awesome – if only we could buy them in NZ!  Or can we – does anyone know?!