Webcomics are one of the best (although this may be controversial) things to come out of the internet. Creators has a direct path to new and diverse audiences, without meddling from publishers and often a better understanding of the current social climate than more mainstream titles. It seems that there’s a webcomic for any interest! WCL has to be a bit more…selective in the webcomic collections we acquire, but if the thought of clicking through hundreds of pages doesn’t appeal, we’ve got a decent selection. 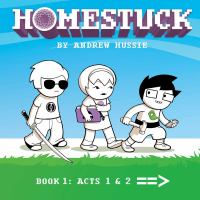 Homestuck has been called the internet’s “Ulysses.” Possibly due to its length, possibly due to its devoted fanbase and its equally vocal detractors. It’s also incredibly hard to describe its plot. It’s also very hard to translate to a book format, as the author notes but he helpfully provides links to the actual pages where the plot is conveyed in gifs and flash animations. And it was created in MS paint, which is quite something. You’ll never read anything like it.

“A young man stands in his bedroom. It just so happens that today, the 13th of April, 2009, is this young man’s birthday. Though it was thirteen years ago he was given life, it is only today he will be given a name! What will the name of this young man be?”
-Homestuck, first lines.

Girl Genius has been running since 2005. It’s still going, and updates on Mondays, Wednesdays, and Fridays. That’s a lot of material. It is based around the adventures of Agatha Clay, who discovers that she has an ancient and mysterious birthright, as well as having the “spark” – a strange group of personality traits, which predisposes the person to acts of mad…genius. It’s one of the preeminent Steampunk works, although the author prefers the term “gaslamp fantasy.” At any rate, it’s a great webcomic but works so well in a printed format – it’s much easier to catch up! Here’s book one.

You probably never thought of seeking out a comic written by a five year old and professionally illustrated and you never thought you’d need it in your life but Axe Cop is really something else. It’s silly, anarchic, and really nice to look at; the comedy webcomic holy trinity. It’s really funny as well. The plot is basically the title. An axe-wielding cop fights crime, which consists of whatever a five year old deems as criminal (hint: dinosaurs are heavily involved). As a side note, the writer and the illustrator are brothers, which is adorable.

Other webcomics we have in printed format include Gunnerkrigg Court and Hark: a vagrant.