ComicFest is back for 2017! On Saturday May 6th at the Central Library there will be panels and workshops all day long for comic-lovers of all ages. You can also pick up a free comic from us on the day and celebrate Free Comic Book Day, courtesy of GRAPHIC! Head over to the ComicFest Facebook event for all the details, and to receive event updates. 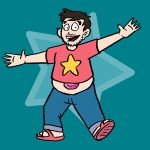 Sam Orchard is the author of the popular webcomic Rooster Tails. At ComicFest, Sam will be on our panel Should we all be writing political comics? along with Toby Morris and Sarah Laing, and moderated by the National Library’s Hannah Benbow. Check out Sam’s A’s to our Q’s below:

Q: What first got you interested in comics?
A: I’ve always loved drawing – as a kid it was always a really nice way to get lost in my thoughts and feelings and imagination… it still is, actually.
I’ve always loved words and pictures together – kids books by Babette Cole, and all of the Where’s Wally books would keep me entertained for hours. But it wasn’t until I was coming out in my late teens , when I went in search of representations of queer characters, that the power of comics (and in particular webcomics) became apparent. I was trying to find people like me, people I could relate to, and people who made me feel less alone. Up until that point I had been a total TV and Film nerd, but all the representations of of LGBT folk, at that time, were all pretty negative. But on the internet I found amazing queer webcomics by people like Paige Braddock, Kris Dresen and Erika Moen, and it opened up a whole new world for me.

Q: What is your average day like?
A: Well, I work part-time as a comic artist, and part-time as a personal assistant for a guy who runs an organisation in the accessibility/disability sector. So in any given week I’ll be balancing working for my boss, and finding time to draw. Both roles work really well for me, I often get to be part of really interesting conversations in my PA role, and that helps me to think about topics I want to draw comics about. There’s a nice balance of a quite social PA role, and my solitary drawing role.

Q: Can you tell us about a current or recent project you’ve worked on?
A: At the moment my big project is finishing up a children’s book I’ve co-authored, which is being published by Flamingo Rampant (http://www.flamingorampant.com) . Flamingo Rampant is an independent book publisher who published feminist, racially diverse, LGBTQ-positive books , and I’m so excited to be working with them! Our book is a counting book about a little kid’s birthday party – it also celebrates different family structures, queerness, transness, polyamory, disability, and I’m just super proud of it.

Q: Do you have any traditions or rituals that help you when you get to work?
A: I need a lot of noise when I work. So when I sit down for the day to draw I pop my headphones on and listen to podcasts or tv. Shortland Street is my fave to draw to – I found a youtube channel that had put up episodes from around 2003 so I’ve been making my way through the last 15 years of it. It’s perfect because the plot is fairly slow (which means it’s ok when I don’t pay attention, because they’ll repeat it), it’s pretty light (so I don’t get pulled in to the emotions) and it’s just a great show so it keeps me entertained.

Q: Who/what is your biggest influence or inspiration?
A: Ohhhh, I don’t think I have just one – I’m really influenced by Alison Bechdel, she’s been exploring queerness and queer communities for decades, and her stuff is amazing, complex, and dykes to watch out for is eerily relevant to today. Other big comic inspirations for me are Erika Moen, Lynda Barry, Lucy Knisley, and I’m really loving Blue Deliquanti’s stuff at the moment too. But I get inspired by a whole host of other people too – people like Janet Mock and Laverne Cox, but also the queer and trans activist scene in New Zealand too – people in No Pride in Prison’s, the Gender Minorities organisation, the list goes on.

Q: What or who are your favourite NZ comics or creators?
A: I’ve been a big fan of Robyn Keneally and CocoSolid for years, when I stalked them both on myspace.

Q: What is your dream comic project?
A: A few years ago I published the first three issues of my comic series ‘Family Portraits’ which is a series of short stories about queer and trans people in New Zealand. I’ve got the stories for the next book but I just haven’t had time to sit down and draw them. So that’s my dream right now – to get time and space to crack that next issue.

Q: If you were to enter our cosplay contest, who/what would you dress up as?
A: Steven Universe – he is my fave.