Here is a mix of old and new movies (and a TV show) from our DVD shelves, storage facility, and online-streaming services, that Staff have been enjoying recently. 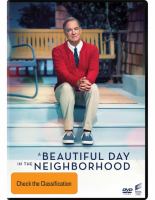 A beautiful day in the neighbourhood
It’s a Biographical film of Mister Rogers the American TV host of the pre-school television series Mr Rogers. A good yarn of a film with a feel-good factor about kindness, love, and forgiveness. (Maxine)

It Must Be Heaven
The Palestinian filmmaker Elia Suleiman stars himself in his first feature in ten years and goes out from his homeland Nazareth to Paris and New York as ‘a citizen of the world’. He plays a film director but no one shows the interest in his film just like Palestrina has been often ignored from the rest of the world. The film implies serious messages, but with a touch of Jacques Tati and the unique Swedish maestro Roy Andersson, Suleiman makes it a minimal yet playful comedy. A droll gem. (Shinji)

Rams
Starring Michael Caton and Sam Neill. Marketed as a comedy, this movie is actually the heartbreaking tale of two brothers on neighbouring farms, who have not spoken a civil word in 40 years. Faced with the catastrophic outbreak of disease in the region, and savage bushfires, they are forced to work together to save their tiny flock of rare-breed sheep. (Kath)

Dogfight
This largely unknown little gem from 1991 tells a story of an unlikely but lovely one-night stand. Set in San Francisco in the mid-60s, it unfolds when U.S marines hold a big party before being sent to Vietnam. Featuring brilliant, flesh-and-blood performances by Lili Taylor and River Phoenix, the director Nancy Savoca sensitively crafts a sweet, moving affair. Soundtracks from the 60s folk music including Bob Dylan and Odetta make it even more memorable. (Shinji)

Capricorn One.
Another classic 70s deep state conspiracy thriller, along the lines of The Parallax View. Due to an immanent systems failure ‘Capricorn One’ – the first crewed mission to Mars – blasts off without its crew. Another failed space mission would result in NASA’s funding being cut and private contractors losing millions in profits, so the astronauts are taken to an abandoned warehouse fitted out as a TV studio, and blackmailed into filming counterfeit televised footage during the flight. But when the spacecraft burns up during atmospheric re-entry, what happens to them now….Written and directed by Peter Hyams with Elliott Gould as a crusading journalist out to discover the truth, and James Brolin, Sam Waterston, and O. J. Simpson as the astronauts. A good solid old fashioned thriller. (Mark)

Shadow of a doubt
One of Hitchcock’s early American efforts, ‘Shadow of a Doubt’ explores the darkness lurking beneath the surface of an idyllic Californian town. Teenage Charlie is thrilled when her namesake uncle Charlie comes to stay, but soon comes to suspect he might be running away from something horrific. The cosy domesticity of the family home becomes increasingly claustrophobic as Charlie’s suspicions grow more certain, but the rest of the family remain blissfully ignorant, taken in by Uncle Charlie’s easy charm. Hitchcock called this his favourite of all his films and it’s not hard to see why – every element is pitch perfect, from the performances to the atmosphere to the undermining of the seemingly ideal nuclear family. Definitely worth a watch! (Charlotte)

Happy as Lazzaro
In this half social and half magical realism dram, new Italian auteur Alice Rohrwacher creates an enigmatic modern fable by avoiding the explanatory narrative and letting images and sounds talk. With the surprising twist at the middle point, it offers a unique cinematic experience like no other. Bewitching. (Shinji)

A chorus line
The classic Broadway musical, brought to the screen. Set at an audition for a Broadway chorus line, a group of young hopefuls share their hopes and dreams. Killer musical numbers and a great storyline. Directed by Richard Attenborough. (Kath)

The Undoing
Based on the Jean Hanff Korelitz’s novel You Should have known, this highly anticipated HBO’s mini-series follows a wealthy, perfect-looking New York couple who becomes the centre of the high-profile murder case. Although it’s not the best work by director Susanne Bier (After the Wedding, The Night Manager), the superb performances by the starry cast led by Hugh Grant, Nicole Kidman and the great Donald Sutherland make it a more than watchable psychological suspense. (Shinji)

I, Daniel Blake
The story of a 59 year old carpenter who finds himself out of work, trying to navigate the welfare system in the UK with dignity and respect. This film humanises welfare recipients and highlights just how punitive and discriminatory the systems in place are. Pack your tissues for this one! (Kath)

Caravaggio
I recently had the pleasure of watching Derek Jarman’s Caravaggio, which I borrowed on DVD. I saw it years back, but I went back again as I’d just read through his collected sketchbooks. I found it doubly wonderful to see his drawings and poems rendered into their final form- even more moving than before. I’d enjoyed his other films in the past, but none had made the same impact as this, hot on the heels of his personal writing. It’s a strange and sumptuous feast of a film, unexpected, anachronistic and beautiful- and I couldn’t recommend it highly enough. Our collections on his sketchbooks– and the book on his garden– make for wonderful companions! (Alex)

Bill & Ted face the music
William “Bill” S. Preston Esq. and “Ted” Theodore Logan are back, grown up, still married to the Medieval Babes and now parents of daughters that are very like them! Faced with the end of time yet again, they’re tasked with travelling through time to save the universe. And their daughters follow them on their quest. It’s silly, it’s full of call backs to the original movies, and it’s a great way to pass a couple of hours. (Kath)

[Bemafilm only]
Never released on DVD in Australasia ‘Time Lapse’ is an award winning indie-Sci-Fi film that has recently been added to our streaming service Bemafilm. Finn is a painter with a creative block, who lives together with his girlfriend Callie and his best friend Jasper in an apartment complex where Finn works as a manager. When they go to check on a reclusive elderly tenant they discover a strange machine in his apartment that takes Polaroid photos of their living room’s picture window—apparently 24 hours in the future, always at 8pm. Discovering the mysterious charred corpse of the tenant in his storage facility, they decide to use the machine for their own financial and artistic gain. However this means they have to make sure the events depicted in the photos come to pass or the timeline won’t be real… no matter what they show. Intriguing low-key Sci-Fi that digs into the ideas of causal loops, makes clever use of a static location and relies on a ideas rather than effects. Recommended if you like films such as Coherence & Primer. (Mark)

If Beale Street could Talk
Barry Jenkins’ follow up to the Oscar winner ‘Moonlight’ is a faithful adaption of a James Baldwin novel, and is a lyrical portrait of a young black couple who is facing injustice. The deeply rooted racial issue is the undertow of the film, but with his poetic aesthetic, Jenkins crafts a haunting yet beautiful love story. Glorious. (Shinji)

Nobody
If you ever watched ‘Breaking Bad’ or ‘Better Call Saul’ & wondered what the shows would have been like if Bob Odenkirk had been cast as Walter White and Bryan Cranston had been cast as the comical lawyer Saul Goodman, then this is the movie for you. This action thriller directed by Russian director Ilya Naishuller (Hardcore Henry) and written by Derek Kolstad (creator of the John Wick franchise) sees Odenkirk plays Hutch Mansell, a seemingly average middle aged office worker, who helps a young woman on the bus being harassed by a gang of thugs, only to become the target of a vengeful drug lord. However, much like John Wick, Hutch is not the mild-mannered guy he is pretending to be, and what follows is a hugely entertaining action-fest full of bonkers violence, absurdly entertaining scenes, and a good deal of tongue in cheek self-awareness. Tons of fun. (Mark)