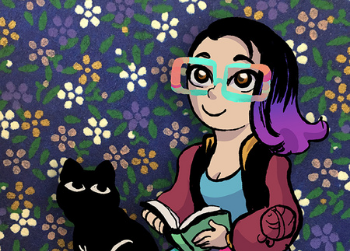 Jem Yoshioka is an illustrator and comic artist living in Wellington, New Zealand. Deftly weaving words and pictures together, Jem’s comics tell evocative and emotional stories with themes of belonging, place, and heritage.

Jem’s work has been published in a range of local and international anthologies, including the 2020 publication Lockdown: tales from Aotearoa, published by Christchurch Art Gallery. She won first place in the Chromacon New Zealand Indie Arts Festival Comic Awards in 2013 and 2015 and was shortlisted in 2017.

I have always loved to tell stories and draw pictures, so in a way I feel like I was always on the path to comics. I read a lot as a kid and loved picture books fiercely.

I work full time, so I do that, then come home and make comics. I’ve been cooking a lot of hotpot, so that’s been a nice thing to have on hand. Lately I’ve also been playing a lot of Dungeons & Dragons, which is great because it forces me to socialise. Comics can be quite isolating!

Last year I finished my long-running webcomic, Circuits and Veins, and this year I’ve started Folk Remedy, which is set in a fantasy Japan during the 1920s and references a lot of Japanese folklore. I’ve been publishing it since April and I’m really proud of it so far.

I always have a spare doodle canvas open, so that if I’m struck by other ideas while I’m working on my comic I can draw them down. Usually nothing much comes of it, but it’s nice to have that little no-pressure space alongside my regular comics space.

Last time I said my grandmother, Taeko. And that’s still true! But at the moment I’m really inspired and influenced by Japanese folklore and history, especially while working on Folk Remedy. I’m especially passionate about the stories of yokai, and their role of both shaping and reflecting Japan as a nation have been influential for hundreds of years, They were at risk of being lost during the Meiji restoration but a series of dedicated scholars across generations are keeping the stories, characters, and traditions alive for us and future generations. I love that these stories aren’t static, but adjust to what’s needed, and even new yokai are born all the time! Of course Rachel Smythe, my closest friend. But I also love the work of Kay O’Neil, Alex Cara, Tara Black, Michel Mulipola, and so many others I’m forgetting.

I’m working on them! The thing with comics is you really have to love them to make them, they take so much work. I love working on projects connected to my heritage that get to reach heaps of people. Telling stories about Japanese diaspora, or fiction but from a Japanese diaspora lens is a huge passion of mine, and one that has been present in all my recent work. It’s the most rewarding thing, to have someone else who has struggled with their heritage tell me that my sharing of my journey has helped them with theirs. I hope that through my work I can continue to do this, to share these feelings. I’m keen to talk about the exciting potential that comics have as a medium! They’re honestly so powerful as a vehicle for creative storytelling, and I believe that the world will always need more people reading, creating and championing comics.

Hecate from Lore Olympus. Fantastic style, barely contained chaos. I like that in a fictional character.