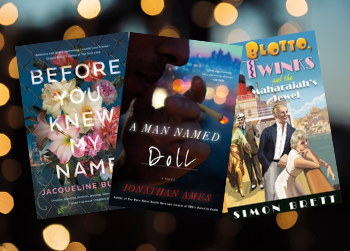 The Alfred Hitchcock plot device known as the McGuffin is strongly in evidence in our recently acquired crime novel Blotto, Twinks and the Maharajah’s Jewel by Simon Brett. In the case of this book the McGuffin in question is a huge diamond, but what actually is a McGuffin?

Well, Hitchcock described it in this way: “The McGuffin is the thing that the spies are after, but the audience don’t care.” It is an event, object, or device, necessary to the motivation of the characters and the story, though largely irrelevant in itself.

Two very famous examples of McGuffins are the Maltese Falcon in the book by Dashiell Hammett and as described by George Lucas himself (perhaps controversially)  R2D2 in Star Wars: A New Hope (Episode IV) the first 1977 Star Wars film .  Of course, novels employ many other plot drivers and in many of this month’s selection of recently acquired crime novels the main plot driver is the old classic, the burning desire to solve a ghastly crime. Below is a selection of our newly acquired crime novels.

Blotto, Twinks and the Maharajah’s jewel / Brett, Simon
“An idle conversation on the merits of the glorious game with an old Etonian chum is just the excuse Blotto needs to put himself forward for a cricket tour to foreign climes… and so begins the next adventure for our intrepid duo, So Twinks joins Blotto on a steamer bound for India, one that is full of young woman desperate to marry well there — only once having encountered the dashing Blotto, a lot of them fancy the idea of getting married before they reach their destination. And, unbeknownst to the siblings, also on the ship is the international jewel thief M. le Vicomte Xavier Douce, passing himself off as one of Blotto’s cricketing entourage.” (Adapted from Catalogue)

A man named Doll / Ames, Jonathan
“Happy Doll is a charming, if occasionally inexpert, private detective living just one sheer cliff drop beneath the Hollywood sign with his beloved half-Chihuahua half-Terrier, George. A veteran of both the Navy and LAPD, Doll supplements his meager income as a P.I. by working through the night at a local Thai spa that offers its clients a number of special services. Armed with his sixteen-inch steel telescopic baton, biting dry humor, and just a bit of a hero complex, the ex-cop sets out to protect the women who work there from clients who have trouble understanding the word “no.”  (Catalogue)

House with no doors / Noon, Jeff
“At first glance, Leonard Graves’ death was unremarkable. Sleeping pills, a bottle of vodka, a note saying goodbye. But when Detective Henry Hobbes discovers a grave in the basement, he realizes there is something far more sinister at work. Further investigation unearths more disturbing evidence. Scattered around the old house are women’s dresses. All made of the same material. All made in the same colours. And all featuring a rip across the stomach, smeared in blood. As the investigation continues and the body count rises, Hobbes must also deal with the disappearance of his son–” (Adapted from Catalogue)

Figure in the photograph / Sullivan, Kevin
“1898. Juan Cameron’s father is killed while working as a photographer amidst the chaos of war in Cuba, but his last pictures reveal a sinister truth to his final moments. Juan travels to Scotland to grieve with family and immerses himself in the study of photography. When he invents a device that inadvertently solves a crime, local law enforcement recruit him to help stop a brutal serial killer plaguing the streets of Glasgow.” (Adapted from Catalogue)

The Oxford Brotherhood / Martínez, Guillermo
“Mathematics student G is trying to resurrect his studies, which is proving difficult as he finds himself — and not for the first time — drawn into investigating a series of mysterious crimes. After meeting with a member of the Lewis Carroll Brotherhood, a startling new discovery by Carroll’s great niece rocks Oxford, leading to deadly plots, salacious pictures and murder. G must stretch his mathematical mind to its limits to solve the mystery and understand the cryptic workings of the Brotherhood. Until then, nobody, not even G, is safe.”–Publisher.” (Adapted from Catalogue)

City of vengeance / Bishop, D. V.
“Florence. Winter, 1536. A prominent Jewish moneylender is murdered in his home, a death with wide implications in a city powered by immense wealth. Cesare Aldo, a former soldier and now an officer of the Renaissance city’s most feared criminal court, is given four days to solve the murder: catch the killer before the feast of Epiphany, or suffer the consequences. During his investigations Aldo uncovers a plot to overthrow the volatile ruler of Florence, Alessandro de’ Medici. If the Duke falls, it will endanger the whole city. ….” (Adapted from Catalogue) Also available as an eBook.

The Marlow Murder Club / Thorogood, Robert
“Judith is 77 years old and blissfully happy. She lives on her own in a faded mansion just outside Marlow, there’s no man in her life to tell her what to do or how much whisky to drink. One evening, while out swimming in the Thames, Judith witnesses a brutal murder. The local police don’t believe her story, so she decides to investigate for herself.” (Adapted from Catalogue) Also available as an eBook.

Before you knew my name / Bublitz, Jacqueline
“Ruby Jones is a lonely Australian woman trying to put distance between herself and a destructive relationship back home, and is struggling in the aftermath of being the person to find Alice’s body. When she encounters Death Club, a small group of misfits who meet at bars around the city to discuss death and dying, she finds a safe space to explore her increasing obsession with the girl and her unidentified killer. Alice, seemingly stuck between life and death, narrates Ruby’s story, hoping that this woman will help her come to terms with what happened and help identify her body. ” (Catalogue) The classic form of Agatha Christie’s Miss Marple is echoed in these crime novels.  A perplexing problem to be untangled by an engaging sleuth.  These titles feature a variety of themes from crafty crime with knitters and quilters to culinary crime featuring caterers and chocolate lovers. The settings range from vineyards to seaside villages to captivate the audience and the plot draws the reader along with the detective in question, from bookshop owner to cat detective to knitting group.

If you enjoy our Cozy Crime Collection why not try exploring cozy mysteries titles in our eBook and eAudio collection through Overdrive.

Wellington City Libraries has a great range of these authors and titles, with recent additions in established series and some newly discovered authors adding a fresh voice to this Mysteries sub genre.

Murder wears mittens / Goldenbaum, Sally
“As autumn washes over coastal Sea Harbor, Massachusetts, the Seaside Knitters anticipate a relaxing off-season. The knitters intend to facilitate a family reunion, not investigate a crime. But the death of Dolores Cardozo, a recluse from the edge of town, throws the group for a loop. Especially when the missing mother and one of their own become tied to the victim’s hidden fortune and her murder . . .(Adapted from Catalogue)

A catered costume party : a mystery with recipes / Crawford, Isis
“When sisters Bernie and Libby Simmons agree to cater an extravagant Halloween party in their little upstate New York town of Longely, they figured a ghost or two and a blood curdling scream might be part of the menu, but they never expected to be haunted by the deadly specter of murder . . . Was it suicide, induced by despair over his missing spouse? Bernie and Libby think not, once they read the note he left–which includes a sum of money and a request for them to “do something” if anything should happen to him. (Adapted from Catalogue)

Toucan keep a secret / Andrews, Donna
“Meg Langslow is at Trinity Episcopal locking up after an event and checking on the toucan Meg’s friend Rev. Robyn Smith is fostering in her office. After hearing a hammering in the columbarium, Meg finds an elderly parishioner lying dead on the floor of the crypt. Several niches have been chiseled open; several urns knocked out; and amid the spilled ashes is a gold ring with a huge red stone. The curmudgeonly victim had become disgruntled with the church and ranted all over town about taking back his wife’s ashes. Did someone who had it in for him follow him to the columbarium? Why was the ruby left behind?”(Catalogue)

The Cracked Spine / Shelton, Paige
No one was more surprised than Delaney Nichols when she packed her bags and moved halfway across the world to Edinburgh, Scotland to start a job at The Cracked Spine, a bookshop located in the heart of the city. Her new boss, Edwin MacAlister, has given her the opportunity of a lifetime, and Delaney can’t wait to take her spot behind the desk. But before she can settle into her new life, a precious artifact goes missing, and Edwin’s sister is brutally murdered. Never did Delaney think that searching for things lost could mean a killer, but if she’s to keep her job, and protect her new friends, she’ll need to learn the truth behind this Scottish tragedy.” (Adapted from Catalogue)

Probable claws / Brown, Rita Mae
“Mary Minor “Harry” Haristeen and her friends and animal companions pursue the threads of a mystery dating back to Virginia’s post-Revolutionary past, when their 18th-century predecessors struggled with the challenges of the fledgling country. In the present day, Harry’s new friendship with Marvella Lawson, doyenne of the Richmond art world, leads her to rediscover her own creative passions–and reveals evidence of an all too contemporary crime.” (Catalogue)

Revenge of the crafty corpse / Winston, Lois
“Anastasia Pollack’s dead louse of a spouse has left her with more bills than you can shake a crochet hook at, and teaching craft classes at her mother-in-law’s assisted living center seems like a harmless way to supplement her meager income. But when Lyndella Wegner, a 98-year-old know-it-all with a penchant for ruffles and lace is murdered, Anastasia’s cantankerous mother-in-law becomes the prime suspect. Upon discovering that Lyndella’s X-rated craft projects, and her scandalous behaviormade her plenty of enemies, Anastasia sets out to find the real killer before her mother-in-law ends up behind bars.” (Adapted from Catalogue)

X marks the Scot / Dunnett, Kaitlyn
“After she hires an archivist to help her research a treasure map that she found at the Chadwick estate in Moosetookalook, Maine, Scottish Emporium owner Lisa MacCrimmon is horrified when the archivist is murdered, and takes it upon herself to find the killer.” (Catalogue)

Bloodroot : a Martha’s Vineyard mystery / Riggs, Cynthia
“It’s just another day at the dentist’s office for Victoria Trumbull when fellow patient, wealthy Mrs. Wilmington, dies. It’s an unfortunate, though seemingly not murderous incident, but the receptionist is hysterical, so one of the dental assistants offers to drive her home. But after making a quick pit stop, he finds her body floating in the harbor. With the police shorthanded due to an upcoming presidential visit, it’s up to Victoria to take on the case. As she wrestles with her ex-son-in-law, a $3 million will, and a deadly dental clinic, Mrs. Trumbull discovers that nothing in the case is quite what it seems.” (Catalogue)