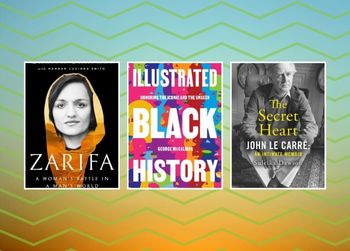 It’s a new year and we have new biographies hitting the collection, including: a female politician from Afghanistan, a much-loved novelist, an actor and of course some royals, among others. There’s a little something for everyone in this collection.

To see what else is new in our collection, go to what’s new & popular (wcl.govt.nz)

Zarifa : a woman’s battle in a man’s world / Ghafari, Zarifa
“Zarifa Ghafari was three years old when the Taliban banned girls from schools, and she began her education in secret. She was six when American airstrikes began. She was twenty-four when she became mayor–one of the first female mayors in the country–and first of Wardak, one of the most conservative provinces in Afghanistan. Written with honesty, pain, and ultimately, hope, Zarifa describes the work she did, the women she still tries to help as they live under Taliban rule, and her vision for how grassroots activism can change their lives and the lives of women everywhere.” (Adapted from Catalogue)

Comrade : Bill Andersen: a communist, working-class life / Locke, Cybèle
“Bill Andersen was one of the most significant figures of the twentieth-century trade union movement in New Zealand. In this biography, Cybèle Locke reveals the relationship between communism and working-class trade unionism during the Second World War and the following decades. Writing with insight and empathy, Cybèle Locke provides a highly readable account of a communist union leader navigating the social and political turmoil of the twentieth century.” (Adapted from Catalogue)

Getting lost / Ernaux, Annie
“Getting Lost is the diary Annie Ernaux kept during the year and a half she had a secret love affair with a younger, married man, a Russian diplomat. Getting Lost is as strong a book as any that she has written, a haunting, desperate view of strong and successful woman who seduces a man only to lose herself in love and desire.” (Adapted from Catalogue)

The secret heart : John Le Carré : an intimate memoir / Dawson, Suleika
“The astonishing portrait of the master of spy fiction, by the woman he kept secret for all of his life. The Secret Heart is the account of Suleika Dawson’s enduring love affair with John Le Carre. A thoughtful, artfully written and intimate biography, the book aims to shed a new light on one of the greatest British writers of the 20th Century and offer an alternative measure of the man over the literary legend.” (Adapted from Catalogue)

Camilla : from outcast to Queen Consort / Levin, Angela
“A compelling new biography of Camilla, Queen Consort, that reveals how she transformed her role and established herself as one of the key members of the royal family. Angela Levin uncovers Camilla’s rocky journey to be accepted by the royal family and how she coped with her brutal portrayal in Netflix’s The Crown. Most of all, Levin tells the story of how Camilla has changed from a fun-loving young woman to one of the senior royals’ hardest workers. She has retained her mischievous sense of humor, becoming a role model for older women and an inspiration for younger ones.” (Adapted from Catalogue)

Illustrated Black history : honoring the iconic and the unseen / McCalman, George
“A gorgeous collection of 145 original portraits that celebrates Black pioneers–famous and little-known–in politics, science, literature, music, and more–with biographical reflections, all created and curated by an award-winning graphic designer.  Beautifully designed with over 300 unique four-color artworks and accessible to readers of all ages, this eye-opening, educational, dynamic, and timely compendium pays homage to Black Americans and their achievements, and showcases the depth and breadth of Black genius.” (Adapted from Catalogue)

All veils are off / Heding, Marguerette
“Qatar? It sounds like a bad lung condition! was Marguerette Heding’s first reaction to her husband about moving there.  ‘All Veils Are Off: The True Housewives of Qatar’ is Marguerette’s extraordinary, hilarious, though at times devastating account of her 8 years living in Qatar. Not only did she have to navigate the tricky expat community, but also the secret and fiercely protected world of the Qatari women – a world very few outsiders, particularly a wine-loving, dog owning Australian infidel are ever privy to.” (Adapted from Catalogue)

Playing under the piano : from Downton to darkest Peru / Bonneville, Hugh
“A moving, laugh-out-loud memoir from one of today’s best-loved British actors, whose credits include Downton Abbey, Notting Hill, and Paddington.  Whether telling stories of his B&H-smoking, G&T-drinking, horse-race-addicted grandmother, or working with an invisible bear with a penchant for marmalade, this is a richly entertaining memoir.” (Adapted from Catalogue)

Revenge : Meghan, Harry and the war between the Windsors / Bower, Tom
“Meghan Markle’s trajectory from unknown actress to world icon is remarkable. After a childhood spent on Hollywood film sets, she fought hard for stardom. But even when she landed her breakthrough role, her lifelong dream of celebrity remained elusive. In 2016 she created the ultimate fairy-tale ending: she captivated her very own prince. Yet, within one tumultuous year, the dream became a nightmare. In the aftermath of the infamous Megxit split and the Oprah Winfrey interview, the Royal Family’s fate seems persistently threatened.” (Catalogue)