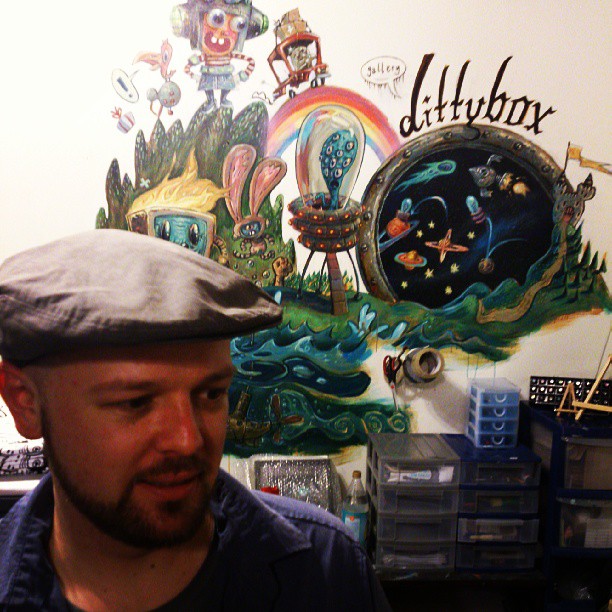 Illustrator and graphic designer, Gavin Mouldey is the man responsible for the amazing ComicFest 2014 posters, fliers and webpage art being used to promote ComicFest and he’s also running a comics workshop on Saturday the 3rd of May as part of Comic Book Free Day at the Central library between 11 and 1.30.

He operates the Dittybox store situated in the heart of Island Bay. Gavin provided answers to our questions below and we’ve added a selection of his images for visual enhancement – enjoy!

Your Dittybox facebook page says that you’re a painter and graphic designer, but I know you’ve worked as an animation artist as well – is there one kind of art process that you enjoy the most?

What I enjoy the most in my process (whether digital or hands on), is the rush of motivation that comes after deciding how to tackle a brief. The first stage when a job comes in tends to be staring at a blank screen or page, completely befuddled. This is often followed by searching for inspiration, finding reference material, or outright procrastination (coffee, a pie, crossword, having a shower, watching a cartoon, etc).

Eventually I’ll start doodling, and something will click. Then a job which seemed like a chore suddenly becomes exciting, and I lose all sense of time. It’s like being hypnotised.

Sometimes my wife leaves the house in the morning and I think “I’ll do the dishes and hang the washing out and pick some flowers and make dinner before she gets home”, then she returns 8 hours later and my head hasn’t turned away from the page. I’ll be still in my boxer shorts, empty tummy, dry mouth… Like a nerd zombie.

You’ve spent some time employed as a production designer in Australia on the TV show ‘Dogstar’ – how did this rate as a professional experience?

My experience in animation has mostly involved creating backgrounds and character/prop designs. Pretty similar to my role as an illustrator. The only real difference is how I get paid, and in the case of Dogstar, the pace of turnaround. The job was great, and I met a lot of future collaborators, but I don’t think I was built for big cities. I like the pace of Wellington, or specifically Island Bay.

You’ve made the image for our very cool ComicFest posters which we’re very thankful for! What are some stand-out projects you have worked on as a freelance artist? Is this satisfying work?

Posters are always fun, as they offer a lot more creative freedom than other briefs. It just has to catch the viewer’s attention. Most of my past work has been for children’s books, educational resources, and magazine publications. I’m not often happy with a finished illustration by the time it comes out in print, as it’s too fresh in my mind.

Work I did for Tearaway magazine as a teenager, 20 years ago, is the most fun to look back on as it seems like someone else’s work. North & South magazine gave me a lot of freedom to create full page illustrations, much like posters, and some of those are still my favourites. 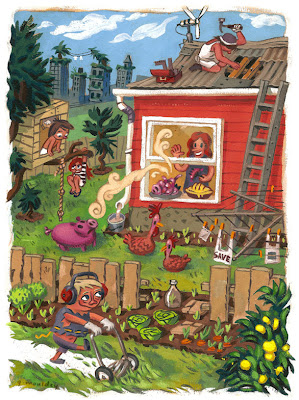 Lately I’ve been painting murals for varied clients. They’re definitely the most rewarding to see finished, and have the most lasting exposure.

I love your Wellington apocalypse series. Where did the inspiration for these incredibly imagined pieces come from?

Initially I planned to have 12 of them for a 2012 “It’s My Apocalypse And I’ll Cry If I Want To” calendar. They were all ludicrous depictions of end-of-the-world scenarios in Wellington settings, making fun of the apocalyptic fever that films/television/Mayans were infecting everyone with at the time. 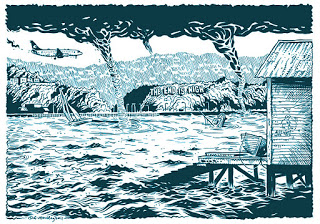 In the end (not the end end), the project was downsized to a large wall-planner, and two limited edition prints. There’s still some left at my gallery if anyone has a soft spot for the apocalypse. 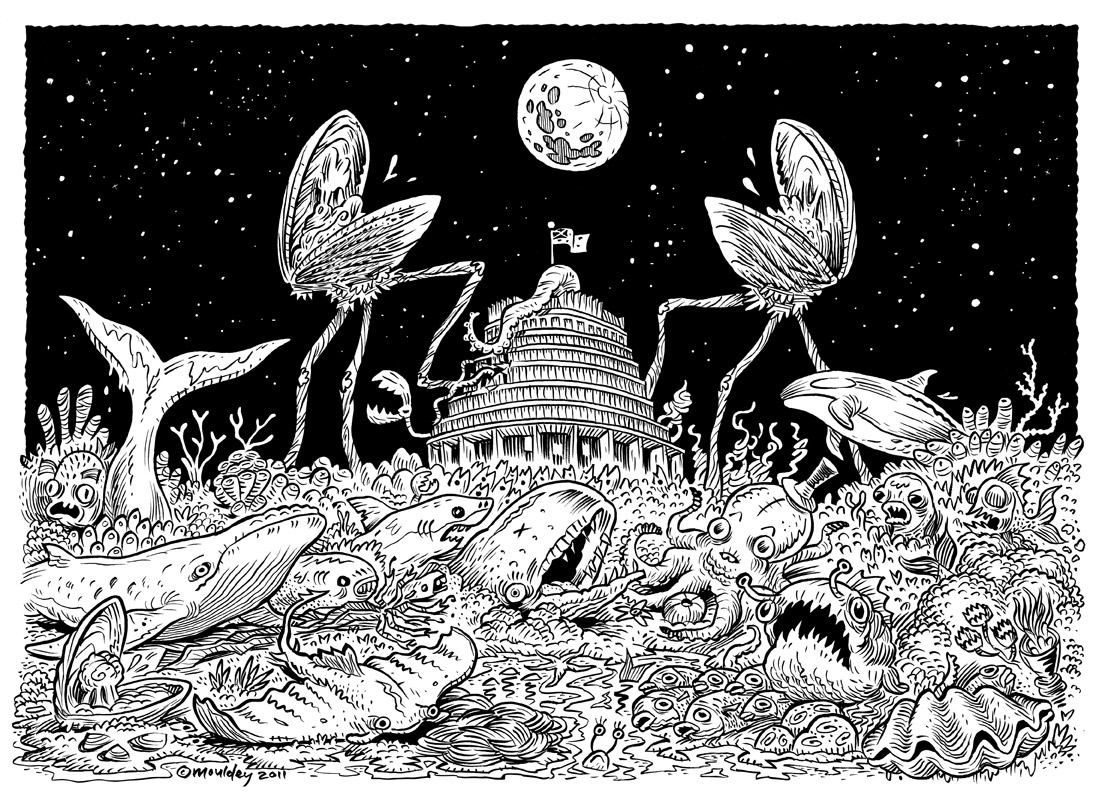 Have you always wanted to be an artist?

I’ve always wanted to draw for a living. The term artist gets over used. It’s becoming so vague, and pretentious.

I think of my job as a trade, like carpentry or gardening. Art is a whole set of industries, and basically anyone can call themselves an artist without any formal education or practice.

Considering that, it’s odd that creating “Art” is treated by some cliques as an intellectual and cultural virtue. Willie Saunders, one of my all-time favourite comic artists who seems to have disappeared, once used the term “cerebral vomit”. That’s probably out of context, but I think it represents a lot of what artists do (myself begrudgingly included). I’m more proud when my illustrations fulfill a set function, than when they just seem like my soul self-indulgently spilt on a canvas.

Gavin also provided a list of some of his favourite comics – many of them by New Zealanders – and you can reserve some of them right now!

Scooters Of The Apocalypse by Alister Kitchen (Kiwi)

Ripple – a predilection for Tina by Dave Cooper