Hayden produces the awesome zine comic ‘Book’ along with Matt Henley and James Rowsell. We have numbers one and three of Book in the zine library waiting eagerly for you to discover (sorry we have no idea what happened to two!). Thanks for answering our questions Hayden!

Since I’ve got a new job I wake up really early. My current job is pretty brainless; I just have to stick posters around the city. I only focus on getting them straight. Before the zine fest I was working very hard on Book, our latest zine. We really wanted to get the zine finished and it was hard work but lots of fun. Soon after the zine fest I started this new job, so I have been really tired for the last few weeks because I did not get a chance to rest in between. I tend to do some illustrations before going to work. To do so I have to wake up really early. But I think it is really important for me to draw, even if I need to wake up so early.

I would say that it is mainly a satire or really crude humour. For example, the stuff in Book is a kind of cartoony and funny as well as a raw critique of our society.  But I think other people would be better than me at describing my work.

How did you first get into zines?

It was a bit accidental. James and I started to print out our first zine in an A5 format because it was cheaper. Then we sold it at the 2008 zine festival and it went really well. So I guess we just wanted to make a comic and distribute it in a cheap way and the result was a zine.

I really like the fact that they are small and easy to carry. They are a great cheap form of showing your own work. The zines I like the best are the ones that manage to combine good illustrations and entertaining stories. Overall I tend to prefer zines with really nice art.

Is there anything you don’t like about zines as a medium?

Yes, I think many of them do not show a lot of thought about entertaining other people. It looks like they have been written as a personal diary and then turned it into a zine. The final product seems to be a compilation of personal stuff, interests and thoughts. I find this very boring and superficial. 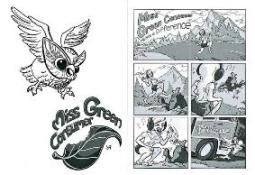 How do you get inspiration for a zine?

I think I get inspiration from a basic reaction to things from popular culture. I find inspiration in everyday culture and I think most things in life are quite funny and ridiculous.  Let’s take for example Miss Green Consumer, a character from Book, who tries to make a difference through consumer’s choice. I personally find the idea that you can save the world by buying something eco-friendly quite ridiculous. Miss Green Consumer goes through a series of accidental adventures, it is actually really funny.

Tell us about some of your favorite zines…

Monsters by Ken Dahl is one of those zines that has a great story and really nice drawings. I highly recommend it.

View all posts by Stephanie