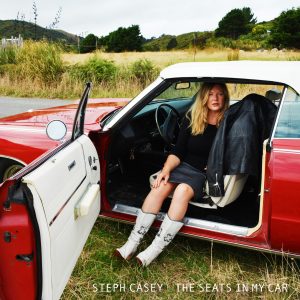 Kapiti Coast Based Songwriter and musician, Steph Casey releases her sophomore album, ‘The Seats In My Car’, on July 26th, backed by a stellar cast of New Zealand musicians. ‘The Seats in my Car’, arrives six years after her debut album, Whisper & Holler, which received glowing international reviews and charted in the top five of the NZIM charts. The new album reveals the departure Casey has made from the classic singer-songwriter style of her debut and the depth of musical experience gained on and off the stage since her first release, and has already received a great review from Graham Reid on Elsewhere.co.nz.

On the strength of her debut, Casey was invited to the US to record her sophomore album with producer Jason Rubal (Amanda Palmer, Robert Smith) but chose to record in Wellington with the musicians who have helped contribute to her new sound. She returned to the legendary Surgery Studios (Trinity Roots, Phoenix Foundation) with the award winning Lee Prebble at the control desk.

On ‘The Seats In My Car’ Casey sings, plays acoustic guitar, and is backed by a stellar line-up of musicians, the core of which comprises the three principal members of indie-pop band Let’s Planet – Alan Galloway (Let’s Planet, Galloway) on electric guitars, Caroline Easther (The Chills, The Verlaines, Beat Rhythm Fashion) on drums and Murray Costello (The Mockers, Sneaky Feelings, the Wooden Box Band) on bass. Among the other contributors on the album are Alan Norman (The Warratahs, Rag Poets) on accordion and hammond organ, Wellington singer-songwriter Hanne Jostensen on backing vocals, and Emily Clemmet (The Wooden Box Band, Ska Pai) on trumpet.

Steph is also taking the album on tour throughout NZ in July, August & November and to the US in September. She will be at St Peters Hall, Paekākāriki on Friday & at Wellington’s The Third Eye on Aug 24th. She will also be doing an RNZ live session on Aug 9th.

We really liked Steph’s debut album (you can check out our review here), so Wellington Music at WCL is proud to present an exclusive premiere of the track ‘Old Love’, ahead of the albums release on Friday.

The first single from upcoming album, “The Seats in My Car”. Animation, filming and video editing by Manan Fredriksson.