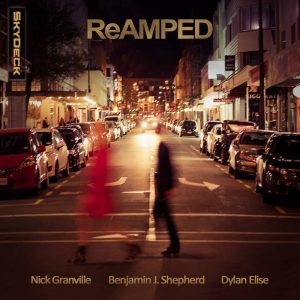 ‘New Album’ is where a band or artist answers some questions about their latest release. Up next is Nick Granville, who released a new album, ‘ReAMPED’, last month under the name Granville Shepherd Elise, which was recorded in Los Angeles with two other NZ musician’s.

Who produced/engineered the album? How did the tracks come together in the studio, or at home?
The album was produced by me, Nick Granville, and the engineer was Gary Novak. Gary is one of LA’s top drummers having worked extensively with Chick Corea, Alanis Morisette, George Benson and countless others. We composed the tunes the day before hitting the studio. The music was a collaboration between Benjamin J. Shepherd, Dylan Elise and Nick Granville.

How did the songwriting happen? Are there any overall themes within the songs/album?
I provided a few ideas prior to the rehearsal/writing session, which were nothing more than a few notes, chords or grooves, but most ideas we came up with on the spot in a rehearsal room the day prior to hitting the studio. While this might sound unusual, for us it is just how we work. We are improvisors at heart, as we all play mostly jazz, so to compose is essentially just writing down what we might have improvise otherwise.

Were you going for a different sound/approach on this album?
Yes, and no. We are trying to be honest to ourselves musically so when you do that you get a sound that is your own to an extent. Everyone thinks they have their own sound so I guess we will let others decide if we actually do. We draw on our influences and this is apparent in the music I think.

Was there any specific gear you used to capture that?
Recording is Los Angeles was amazing in that sense. The gear available was on a different level to anything in New Zealand or almost anywhere else for that matter. For example Dylan had a catalogue of hundreds of snare drums to choose from for the recording sessions.

Is there a particular single/track that you feel captures the essence of the album?
I think ‘Pablito’s chicken’ and ‘Gotchu Bro’ sum up the album. They are groove tunes, with interesting elements and the titles sum up the vibe.

Is there a physical copy available? If not which digital platforms is it available on?
At this stage there is only digital copies available on Bandcamp, CD Baby, iTunes and Amazon but physical CD’s will be available from early 2018.

Are you working on a video/videos for any of the songs?
There is 3 video’s on YouTube of the recording process. A 10 minute video documentary type look at the recording, a 3 minute summary and a 1 minute quick look. There is also lots of videos of the process on my Instagram page.