From The Archives: Rip It Up – Bella Kalolo/Have Paper, Will Travel 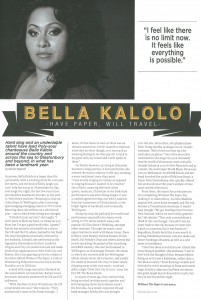 BELLA KALOLO: HAVE PAPER, WILL TRAVEL

Hard slog and an undeniable talent have lead Poly-soul chanteuse Bella Kalolo around the country and across the sea to Glastonbury and beyond, in what has been a landmark year.

In person, Bella Kalolo is a larger than life personality with a winning smile for everyone she meets, and the kind of filthy laugh you can’t help but warm to. Homemaker by day, soul singer by night, the last few years have seen Kalolo’s daydreams become, as she puts it, “full blown realities.” Relaxing in a bar on Cuba Street in Wellington after a morning spent judging emerging talent on TV1’s Good Morning show, she reflects on a whirlwind year – one in which everything has changed.

“I think it‘s just my hair,” she laughs. “I don’t want to blow my horn, or whatever you blow, but I’ve got a good work ethic, I guess?” Kalolo has recently returned from a trip to the UK and the US, where, backed by her band The Soul Symphony (musically directed by her husband, Alistair), she performed at the legendary Glastonbury festival, London’s Origins and City of London festivals and made several key appearances in New York City and Boston. She’s also gearing up for the release of her debut album Without The Paper, a suite of shimmering Polynesian soul as much Aretha Franklin as it is Jill Scott.

Armed with songs naturally informed by the world which surrounds her, Kalolo found her music instantly understood by UK and US audiences.

“With the likes of Amy Winehouse, the UK is just keyed into soul,” she explains. “They understood it more in the States though… I mean, it’s the home of soul, so there was an instant connection. I never wanted to replicate what they do there though, so it was such an amazing feeling to see that pay off. I stuck to my guns with my sound and it still spoke to them.”

For Kalolo however, arriving at this point has been a long journey. A born performer, she entered the music industry in the ‘90s, working a more traditional route than most.

“I was mostly singing for money as opposed to singing because I wanted to be creative,” she reflects, meaning televised talent quests, musicals, Christmas in the Park-style performances and advertising jingles. It was a studied apprenticeship, one which took her from her hometown of Christchurch, to the bright lights of Auckland, and eventually Wellington. 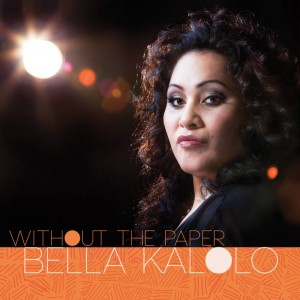 Along the way, she parlayed her traditional performance approach into drama work, acting in TV2 series Jandal’s Away and popular NZ film Sione’s Wedding, amongst other ventures. Through the music came opportunities to work with Renee Geyer, Dave Dobbyn, John Rowles, Nathan Haines, Hollie Smith, Fat Freddy’s Drop and others, slowly but surely spreading the gospel of her scorching soul/R&B tonality. She met her husband in Wellington, at Downstage Theatre, the venue in which she recently held her Wellington album release show. He’s a bassist, and amidst the tussle of married life, they‘ve been slowly chipping away at her own music. 2008 saw debut single ‘I Feel Like I’m In Love’, 2009, her first EP, The Road Ahead.

A couple of years ago, they realised that being married, writing music together and self-managing shows and releases wasn’t the best idea. As a result, respected DJ and band manager Ayesha Kee was brought into the mix. Since then, all cylinders have been firing. “Ayesha is integral to us,” Kalolo enthuses. “She’s freed our time up a lot, and taken us places.” One of the doors Kee unlocked for the singer (no pun intended) was the world of showcases, most critically Sounds Aotearoa 2010 in New Plymouth and as a result, the Australian World Music Showcase 2010 in Melbourne. At AWME Kalolo and her band knocked the socks off Malcom Hayes, a buyer from Glastonbury, who quickly offered her several slots at this year’s edition of that most storied of festivals.

From there, the team’s focus became not just completing Without The Paper, but making it to Glastonbury. As their deadline approached, more dates emerged, and the trip became a Transatlantic showcase. It wasn’t easy though. “We got funding from Creative New Zealand, which we were really grateful for,” she admits. “That only covered about a third of the cost though. I wouldn’t say we came back in the red, because it’s more like a pink or a maroon, but it was hardcore.” Regardless, Kalolo feels like it was worth it, noting friendships formed, contacts made and future bookings obtained, as well as a new sense of confidence.

“I feel like there is no limit now. It feels like everything is possible,” she enthuses. “1 am in love with the thought of that, because before, being an artist was a daydream, rather than a full blown reality.” From backing vocalist and behind-the-scene musician to front and centre stage, Kalolo’s trajectory has been circuitous. Her goals might be just beyond her reach, but they’re not beyond her sight.

Tags: From the Archives, Interviews, Rip It Up