From The Archives: Rip It Up – History Sometimes Repeats: The Journey of NZ hip-hop /Sir-Vere 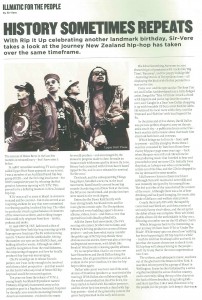 With Rip It Up celebrating another landmark birthday, Sir-Vere takes a look at the journey New Zealand hip-hop has taken over the same timeframe.

The success of Home Brew in the last few months is extraordinary – but I have seen it before.

In 1988 I remember watching TV and a group called Upper Hutt Posse appeared on my screen. I was a member of an Auckland based hip-hop group (UCD) – and the thriving local scene – but UHP trumped everyone by releasing the first genuine Aotearoa rap song with E Tu. This proved to be a deﬁning moment in New Zealand hip-hop.

‘E Tu’ was a call to arms to Maori in Aotearoa to stand and be counted – but it also served as an inspiring anthem for any that were committed to releasing quality, localised hip-hop. The video in particular struck a great balance of elements of the American artform, and striking images that could only originate from here taiaha, pukana and moko.

In 1996 UHP DJ, DLT, fashioned a slice of Wellington/New York hip-hop, teaming up with Supergroove frontman Che Fu with stunning results. ‘Chains’ did the unthinkable, hitting the number one spot on the RIANZ chart, and holding it for five weeks. Although we didn’t need the recognition from the establishment, the outpouring of support and love for locally produced hip-hop was encouraging.

Che Fu would go on to release his solo project, one I was lucky enough to be involved with from a label perspective – and that would set the bar for what any kind of future NZ hip-hop/soul would be measured against.

Ten years on from the release of ‘E Tu’, a young South Auckland DJ/producer named P-Money diligently hammered away on his primitive gear in a Papakura basement. Inspired by the early 2000 sounds emanating from the American movement – evident in the music he would produce – and encouraged by the domestic progress made to date, he made an instant mark with some quality demos. By 2000, Money had connected with Christchurch based rapper Scribe, and in 2001 released the seminal Scribe 2001.

That track, and the subsequent Big Things long player, heralded a new era in the local movement. Based heavily around boom bap sounds thundering out of New York at the time, the NZ scene transformed, and production bars were raised to the tenth degree.

Add the Dawn Raid movement, Che Fu’s soaring solo career, Scribe‘s rise to fame, and P-Money’s driving production across all these projects – and you have what many consider the golden age of NZ hip hop. Beside these obvious success stories, there was also a thriving underground movement, with labels like Breakin’ Wreckwordz releasing quality albums.

It’s no surprise then, that in 2011/2012 we have Homebrew and David Dallas doing the business. Like all genres there are cycles, and, as evident in the prior timeline, it’s time for hip-hop to shine again. Dallas’ solo career was born out of the semi-demise of Frontline (producer 4I was tired of the touring). With Dallas also collaborating with the world-class production duo Fire & Ice, the buzz started to build with his online presence, and his clever lyricism struck a chord with hip-hop purists tired of the gimmicky content the genre had presented in the early-mid 2000s.

His debut Something Awesome in 2010 showed signs of greatness with tracks like Big Time, Runaway, and the poppy Indulge Me – featuring Devolo of Deceptikonz fame – all displaying the kind of skills that pointed to a star on the rise.

Come 2011 and the spectacular The Rose Tint set, and Dallas had developed into a fully-fledged artist. Songs like Take A Picture struck a chord with hipsters and purist rap fans the country over, and Caught in a Daze saw Dallas chopping it up with bonaﬁde US buzz artist Freddie Gibbs. He retained his local roots with vibey cuts like Postcard and Sideline with local legend Che Fu.

In the press and at live shows, David Dallas was picture perfect; eloquent, easy on the eye and a touch shy – a publicists dream come true but it was his stellar music alone that made him stand out both here and overseas.

Which brings me full circle from 1988 to present – and the almighty Home Brew. I was first contacted by Tom from Home Brew via my Myspace page some years ago – back when Myspace was still cool. He told me he was producing music that I needed to hear and proceeded to send me some CDs. Initially I was sceptical, as I always was when contacted by artists out of the blue, and the CDs he dropped to me lay dormant for some months.

I did however listen to them much later (although Tom will maintain I never did) and was instantly intrigued by his unusual tone. The feel and vibe of the tunes belied the content of the music. Although there was a lot of beer drinking and backyard lounging, the music also spoke of defiance and welfare-state protest.

Couple their early EPs with the superbly conceived Last Week set, and then a series of seriously funny viral videos, and the set up for the debut album was complete. Their self-titled double album did the unthinkable in May 2012, debuting at number one on the NZ album charts.

Which brings me back to the interesting 24-year journey it’s been from ‘E Tu’ to Under The Shade. While many quiz me about how ‘nothing has been happening in NZ hip-hop for a while’ – truth be told that it’s always alive and well, it‘s just that the masses choose not to check it out. NZ hip-hop will always belong to the people – and I try to say that in the most unpretentious tone l can.

The artform, and subsequent music, was born out of the ghettos in the Bronx in New York. It was then reinterpreted by a group of Maori in Wellington. It was further fashioned by a series of gifted wordsmiths across this ﬁne country, and is currently riding the top of the charts on the back of three drunken, drug taking kids and that’s just fine. Like I said, this music is by the people, for the people. Let’s keep it that way.

‘History Sometimes Repeats’ sourced from ‘Rip It Up’ No. 347 June-July 2012. Used with permission.