From The Archives: Rip It Up – The Phoenix Foundation/Tale of the Tracks 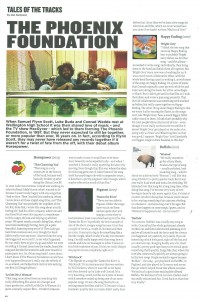 TALES OF THE TRACKS/THE PHOENIX FOUNDATION
by Des Sampson

When Samuel Flynn Scott, Luke Buda and Conrad Wedde met at Wellington High School it was their shared love of music – and the TV show MacGyver – which led to them forming The Phoenix Foundation, in 1997. But they never expected to still be together, or more popular than ever, 16 years on. In fact, according to Flynn Scott, they may never have released any records together if it weren’t for a twist of fate from the off, with their debut album Horsepower.

“That song is a very important in the history of the band, because we’d basically broken up after doing the China Cove EP, in 2000. Luke was overseas, Conrad was working on other stuff and I didn’t know what I wanted to do because I wasn’t really happy with any songs that I had written. Then I started this notebook, where I wrote down all these stupid song titles, and ‘This Charming Van’ was probably the stupidest of the lot. But, from that, I wrote this song about a really boring job I had for a ﬁlm company, where me and my friend Puck were driving out to a warehouse in this crappy, old van and tidying up all their props. We spent nearly a month doing that, which was mind-numbingly boring, but I got a quite beautiful, haunting song out of it! Then Luke got back from overseas and, even though the band didn’t really exist anymore, I showed him the song and suggested we record it, to see what happened. He was really keen to give it a go and while we were recording it Conrad came into the studio, heard the song and decided he wanted to add some beautiful piano parts to it. So, if that song hadn’t come about, I don’t know if The Phoenix Foundation would have ever happened because it really was the rebirth of us, as a band, and helped kick start us into making our ﬁrst, full length album.”

Let Me Die A Woman

“That song came about from me watching this really disturbing ﬁlm about sex changes and trans-genderism, called Let Me Die A Woman. It’s quite a morally suspect ﬁlm — I think if someone was to make it now, it would have to be done more honestly and sympathetically — and when I watched it I found it really upsetting, but also very moving. Even though that ﬁlm was where the ideas for this song grew out of, I don’t know if the song itself has anything to do with transgender issues… It does have a pretty poignant video though, which maybe reﬂects the mood of that ﬁlm.”

“There are two sides to Pegasus. Either the songs have vocals on them and are quite short and snappy, or else they’re instrumental, more convoluted and quite ﬁlm-like. ‘Damn the River’ is probably the best example of one of the short, snappy songs because it just has a couple of verses, a couple of choruses and then an outro. It was us trying to do something like a Smiths’ single, which is why it’s only two minutes long. I’m still really happy with that song, how it sounds and how we managed to reﬁne it down to this little explosion of pop. I think we really did get the pop structure completely right on it.”

“The ﬂipside to a song like ‘Damn the River’ is ‘Hitchcock.’ It’s an instrumental that was written by Will Ricketts, when he was still in the band, and then dressed-up by Luke and Conrad. It’s a very haunting, weird, zombie-rock piece of music which somehow ended up being one of our most popular songs. It’s also the song that led to us writing music for ﬁlms and for TV, because it has a cinematic quality that our music didn’t really have before that. Since then we’ve done a few songs for television and ﬁlm, which we never would have ever done if we hadn’t written ‘Hitchcock’ ﬁrst.”

“I think the one song that sums up Happy Ending best is probably ‘Bright Grey.’ Before we did that song — and this album — we tended to write songs individually, then bring them to the band and ﬁnish them off together. But ‘Bright Grey’ was a new way of working for us. It was a much more collaborative effort, with the whole band having a part in writing it, as with most of the songs on Happy Ending. It’s a piece of music that Conrad originally came up with while he and Luke were doing the music for a ﬁlm called Eagle vs Shark. But it didn’t get used in that ﬁlm, so I took their demo and wrote a pop song around it. That level of collaboration was something we’d touched on before, but really came together on Happy Ending. The other thing about Happy Ending is that we wrote it after touring the States, so the songs on it, like ‘Bright Grey,’ have a much bigger, fuller ‘radio’ sound to them. I think that’s probably why it’s most people’s favourite record of ours – even though it’s not really our favourite record! But it meant ‘Bright Grey’ got played on the radio a lot, along with ‘40 Years’ and ‘Bleaching Sun,’ so that was good, I suppose. ‘Bright Grey’ is still probably our biggest single in New Zealand, to this day.”

“We really wanted to go for a Roxy Music, Avalon-era type of song – a really polished, lush sounding song – which I think we achieved with ‘Wonton.’ I still like that song; I think it’s a pretty special track. But it was also really hard work and took a lot of editing. We laboured over that song for a long, long time. After doing that song, I’ve become very wary of ever having to heavily edit music again! Also, it’s kind of counter-intuitive doing that, because you’re meant to be creating something that captures a feeling, or a moment — not labouring over it for ages. But that does happen on some songs, I guess, and on ‘Wonton’ it happened a lot – far too much!”

“In contrast, ‘Buffalo’ was a really easy song to write. Conrad had the whole guitar part already worked out and then Luke started jamming on it and we all joined in and the lyrics and the chorus just happened very quickly, very easily. If you do something which feels good, right off the bat, and you don’t end up changing hardly any of it, that’s usually a pretty good sign that you’ve struck upon something that’s quality. Songs like that, where the core idea comes really quickly, are always going to be the best songs. People seemed to agree because ‘Buffalo’ — the song — got playlisted on the BBC, in England, and also played in Germany and across Europe which helped break that album overseas. We had such a good time making [the album] ‘Buffalo’. We did most of it at our own studios and it was really relaxed and fun. I look back on that time very fondly.”

“That’s a song that I wrote, about when I was in Berlin. I was travelling with my wife – we’d been married about six months – and we took off on a big, overseas holiday. We had a couple of weeks in Berlin — we hired an apartment there — and really loved it. Berlin has a great underground scene and a really cool vibe to it, so the song is all about that and our experiences while there. It’s also an observational song; it’s about the part of town we were in, the gentriﬁcation that we saw taking place in the city, while we were there, and the consequences of that change and how it affects the whole character of the city. It got played on the radio in Germany, so we got to play a few sold out shows there, as a result of that.”

“When we wrote ‘Friendly Society’, which is 18 minutes long, we realised that we’d have to release a double album – just because we didn’t want that song to not be on the album, and we knew it wouldn’t ﬁt on a single one! But that was cool. We’ve always loved double albums, because they allow you to stretch out the music and explore lots of different things. The very ﬁrst recording session we had for Fandango was two and a half days at Roundhead Studios, in Auckland, and that track was what we came up with. It was a live take, so what you hear on the album is pretty much what we recorded that day. We then did an overdub for it, straight afterwards, and got everyone in the band, as well as Neil Finn – who was just wandering around the studio – to come in and play guitars, do some chants and funny vocal stuff. My vocals on it are pretty trippy because Luke had an idea for me to sing the song though an effects pedal. So, when we were at Roundhead studios, I rummaged through Neil Finn’s guitar effects pedals – he has loads of them – and then put all these effects on my vocals, which made them sound really weird.”

“Luke started writing that song – and ended up singing it – but he didn’t really have any vocals for it, except the line about the captain and a bit of mumbling. So, Luke and I sat down to work on the vocal arrangements together. When we did, I started imagining this person who’d left the sea and was now stuck on land, feeling a bit lost and ungrounded. I think that’s something the video for the song conveys — that sense of loss. It’s one of those songs that’s not really coming from a deep, heartfelt place though because it’s not about, for example, a relationship. But I think it’s still quite poignant and has a surreal quality to it. Although Luke and I wrote the lyrics together it’s very much a Luke-type of song with that yearning feeling he tends to have in his songs, where even uplifting melodies make you feel quite sad!”

“That’s another one of Luke’s songs which I came up with the vocals and lyrics for, but he sings. For me, that song is about feeling very awkward within your relationship. It’s about ﬁnding yourself at a party or a club with someone, you’re drunk, and you suddenly realise you’re not enjoying yourself – or being with them. There’s that moment of realisation, where you look at them, and think; ‘we should be having fun. Why aren’t we having fun together?’ It’s quite tragic, in terms of the lyrics, but it’s also quite a funky song, which makes it more fun.”

“‘Thames Soup’ is one of my favourite songs on Fandango and the lyrics on it are quite personal. It’s a song that’s very much about being in a band, on tour, and away from your families for months at a time. There’s a weird sense of detachment and remoteness you feel when you’re on tour — especially if you’re somewhere like the United Kingdom, which is literally on the other side of the world and in a completely different time zone. It also makes any conversations you have very disorientating because when you talk to your family, back in New Zealand, they’re just getting up and starting their day and you’re either just ending yours, or you’re out, down the pub, getting pissed! That’s pretty surreal.”