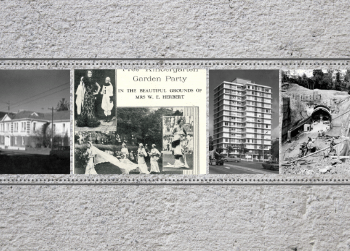 Many Wellingtonians will be familiar with Herbert Gardens, a striking mid-century modernist apartment building located at 186 The Terrace, next to the top end of Boulcott Street leading to the motorway on-ramp.  It was designed by the architectural firm of Biggs, Power and Clark in the early 1960s and built between 1963 and 1965.

One can only imagine the impact the building had when it opened; at the time of construction the Terrace was still dotted from end to end with wooden colonial villas and only two modern office buildings (Shell House and Massey House) had been completed.   This was also an era when the inner-city population was in rapid decline as people moved out to the suburbs, shops were closed on weekends, ‘six o’clock closing’ was still in force and Wellington’s first and only so-called ‘supermarket’ was little more than a medium-sized grocery store on Willis Street.  With that in mind, the development firm of Winchester Developments Ltd took on a degree of risk in believing that there would be enough people interested in European-style apartment living at a time when inner-city culture and atmosphere was anything but ‘vibrant’. The name the developers decided to give to their venture commemorated the former owners of the large house which once existed on the site and (as the name suggests) their well-known and much-loved garden.

Dr William E Herbert was born in central Otago in 1872. He studied at both Otago University and the famous medical school at Edinburgh University before settling in Wellington where he established a small private practice as well as working at Wellington Hospital. After a visit to the United States where he was impressed with what he saw as a much more efficient way of delivering health care, he formed a business partnership with Dr Henry Hardwick-Smith and in 1912 they established what was then Wellington’s first ‘modern’ private hospital in Bowen Street. Though the hospital buildings were demolished in the early 1970s for the construction of the Treasury headquarters, the original name of the institution continues to live on after Bowen Hospital became a charitable trust and relocated to Crofton Downs.  It was during the 1920s that William and his wife Florence moved into the large mansion called Fern Glen located at 186 The Terrace which had been owned by her parents, her father being the wealthy businessman and hotelier, Hamilton Gilmer. Likely built in the 1880s, it was located at the front of a one-acre section with the back of the land parcel dropping down into a natural valley where the Kumutoto river flowed and which later became known as Herbert Gully.  They set about landscaping and planting the section behind the house and transforming it into what was regarded as one of the finest private gardens in inner-Wellington. The Herberts had long been involved with charity and philanthropic causes, raising large sums of money to build Wellington’s children’s hospital and to purchase some of NZ’s first radiotherapy machines used for treating cancer, so it followed that they would use and showcase their garden for charitable purposes. In early 1934, The Social Review reported such an event; a garden party raising funds for Wellington Free Kindergarten.  Highlights included a fashion show featuring new work by the local clothing designer Mary Garden, a performance by a dance group and a display of “relaxation exercises  demonstrated in a reclining position”.  Though her husband died unexpectedly in 1933, ‘Florrie’ Herbert remained living in the house, outliving her husband by almost 30 years until her death in 1961. Soon after the mansion was demolished and planning and construction of the apartment building began.

Photos from this period in the late 1960s  show the original gardens still existing and though they were in a state of disrepair, they would have provided a quiet outdoor area for the apartment building’s early residents. However, it was to be a short-lived peace; almost exactly the same time as the building was completed, the final route of the Wellington Urban Motorway was confirmed. Most of what remained of the gardens were compulsorily acquired by the National Roads Board and in the mid 1970s they were dug out to create the section of the motorway which leads to the northern portal of the Terrace Tunnel. However, now clad in regenerating native bush, a small section of the original garden remains for residents of the apartments to enjoy to this day.