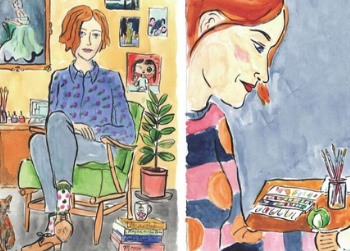 Sarah Laing is a fiction writer and cartoonist. Her first collection of short stories, Coming up Roses, was published in 2007, and followed her win of the 2006 Sunday Star Times Short Story Competition. She published the novel Dead People’s Music in 2009, followed by an illustrated novel The Fall of Light, published in 2013. She is a co-editor of Three Words: An Anthology of NZ/Aotearoa Women’s Comics, the author of Mansfield and Me: A Graphic Memoir and Let Me Be Frank, and has a regular comic strip in Woman Magazine.

I always really loved illustrated books. I remember being entranced by the swirling 1970s illustrations in Margaret Mahy’s The Lion in the Meadow and immersed in Robert McCloskey’s meticulously rendered world of One Morning in Maine. My step-grandmother had a 1960s book about kids who transformed a garden and I remember wanting to swim in that pthalo green and wear a little white wool mini-coat whilst planting tulip bulbs. My dad grew up in the baby boomer generation where they sold weekly war comics down at the local dairy, and he made sure we were well stocked with Tintin, Asterix, Garfield and Charlie Brown. I remember the Far Side book arriving at our house in the mid-eighties, to be read until the spine split, and later, a visiting American scientist gifted us a few Calvin and Hobbes collections. I discovered Julie Doucet, Alison Bechdel and Tank Girl in the 90s, but it wasn’t until the 2000s that I really began seriously seeking out comics and thinking that it was something that I’d like to write.

I have a 3-day-a-week job as a graphic designer for the government, and I often use my cartooning and illustration skills there. The other two days of the week I am either working on my Woman cartoon strip, due every second Thursday, or else I am drawing comics for a backyard bird rescue book I am working on with my friend, Jo Emeney.

My most recent book was a collection of comics made during lockdown, The Covid-19 Diaries, and before that I selected comics from my blog for a collection called Let Me Be Frank. Although my regular Woman comic treads familiar ground, this time I have invented an alter-ego, Nomi, who is somewhat like me but has permission to have entirely invented adventures. I have recently switched from drawing on paper to using Procreate on my iPad. This makes things faster and the colours brighter, but I do worry that I am losing something – that raw, messy, spontaneous quality – by working digitally.

At the moment I am very time-poor so my method is to wait until I am as close to the deadline as humanly possible and then blitz the comic with a little adrenalin. I do semi-regularly generate new comics in a notebook, although I am always losing notebooks, and half-formed ideas. I hope the ones that I remember are the ones that actually have potential. I also find myself making a lot of coffee and toast with peanut butter. I also really like Everything butter by Fix and Fogg. At the moment, because I am so deadline driven, and also working digitally, my dream comic project is to use watercolours and to be subconsciously and aesthetically driven. I’d like to live in a cottage by the sea, take long blustery walks, come back to my light-filled studio and then paint until a narrative emerges. I think I need some Scandy linen frocks, a wood burner and a bunch of wild flowers for this particular fantasy too. And a day bed for reading and naps.

I’m excited to share the incredible line-up of fellow panellists – Dylan Horrocks, Selina Tusitala Marsh, Michel Mulipola, Zak Waipara, Tara Black and Sam Orchard – I doubt I’ll get a word in edgeways! I guess my idea about comics is that you need to keep your eyes and ears open, as there are stories everywhere. Also, don’t worry too much about whether you are the world’s best drawer. Just as long as people get your meaning, it doesn’t matter. Your own style is unique. Lots of practice – that’s a good idea. If you look at the early days of my blog in 2010, and then now, you will see that I got better at drawing. I wouldn’t say practice makes perfect, but it does make you more fluent and better at perspective.