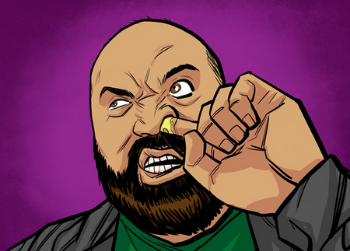 Michel Mulipola is a comic book illustrator and professional wrestler. Auckland-based Mulipola is a self-taught award-winning artist who has produced illustrations for Learning Media, Lift Education, Reading Warrior and independent US graphic novel series Headlocked. In 2006 he won the Gibson Award for Best New Zealand Comic Book Artist, in 2013 he was a grand finalist in the Secret Walls x Aotearoa Live Art Battles, and in 2016 he was awarded the Storylines Notable Book Award for Samoan Heroes with author David Riley. An advocate for comic drawing and creative expression, Mulipola is keen to inspire young talent through regularly visiting schools and running workshops. In 2020 Mulipola published O Le Aiga Samoa with Nafanuatele Lafitaga Mafaufau, the first-ever Samoan language comic book.

I fell in love with comics as small kid after finding my uncle’s stash. I became enamoured with the comics medium right from the first page.

My days are always hectic with a mix of illustrating, business stuff, video games, school visits, community events, pro wrestling, Zoom meetings et al. Every day is a mixed bag because I don’t really keep a daily schedule, I play it by ear. I recently finished an autobiographical comic that will be released as a School Journal by Lift Education. It will only be available in the Sāmoan and Tongan languages as resource for bilingual units in schools around Aotearoa. And I can’t say too much about it yet, but I am working with a very big video game company in developing a new game for one of their franchises.

I don’t have any rituals or traditions when I work. It’s literally eat, sleep (or lack thereof), draw, repeat. The comics medium itself has been my biggest inspiration though as a kid, I was heavily influenced by the late 80s/early 90s X-Men stuff from Marc Silvestri and Jim Lee.

It’s odd to think that some of my favourite NZ comics creators are also good friends of mine. I always enjoy work by Roger Langridge, Dylan Horrocks, Toby Morris, Ant Sang, Ben Stenbeck, Rachel Smythe and more. There is an abundance of amazing comic talent in Aotearoa and I am excited to see what will be created by future artists. As a kid who loved (and as an adult who still LOVES) superheroes, an opportunity to illustrate a comic story for Marvel or DC Comics is always on the bucket list. I’ve had amazing opportunities to draw some of my favourite pro wrestlers for the WWE Comics by BOOM! Studios. The closest I’ve gotten to thet Marvel dream is illustrating over 300 sketch cards for Upper Deck’s various Marvel trading card lines. I don’t have too much to share at the moment. Maybe something about the next Headlocked Kickstarter campaign starting soon? With how untethered my day-to-day schedule is, I would not be surprised if something big comes along before ComicFest that I could possibly share with the audience.

I have had a propensity to cosplay in the past and I haven’t done one in quite a while. I would love to cosplay as either Thanos or Hunk from Voltron – the yellow paladin who is also Sāmoan. My current pro wrestling costume is inspired by Hunk.