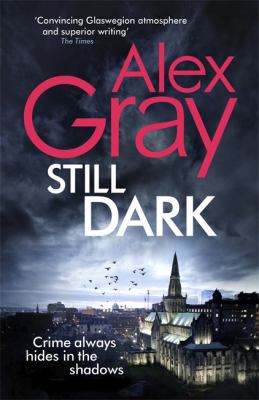 Central Library recently had the unexpected pleasure of a visit from the hugely popular Scottish crime writer, Alex Gray. Alex has published fifteen novels featuring DCI Lorimer, and his psychological profiler Solomon Brightman, and are mainly set on the gritty streets of Glasgow. Alex is also one of the co-founders (with Lin Anderson) of the renown Bloody Scotland festival — Scotland’s biggest crime festival. Alex had been visiting New Zealand for Rotorua Noir: New Zealand’s first crime festival, so we took the golden opportunity to ask Alex about her life and work. This is what she had to say for herself…

Q: Were there any major differences between Rotorua Noir (the New Zealand crime writing festival you’ve just been at) and Bloody Scotland the Scottish crime festival you organize and run?

A: Yes, there were major differences between Rotorua Noir and Bloody Scotland, mainly due to scale. In Stirling, where Bloody Scotland is held, we have the Albert Halls, a theatre holding an audience of around 800 plus the ballroom in The Golden Lion Hotel and a church hall that seats about 100. At most times of the programme three events run concurrently whereas Rotorua Noir had one at a time over two days. One thing the two festivals do have in common, though, is a desire to promote budding writers and on the Friday of each respective weekend masterclasses are held. We normally attract about 55 students for that full day.

Q: Are there any new upcoming crime writers whose works that you were particularly excited about? And why? You mentioned Call Me Evie by J.P. Pomare.

A: I chair an event each year that is billed as ‘Alex Gray’s new blood’ and at this time of year I am reading lots of debut novels. I did attend J.P. Pomare’s debut launch and had that lovely shivery feeling of being in at the start of something that was going to be really special. I intend to read his novel once I return to Scotland so watch this space!

Q: We feel Glasgow exists as a character in your novels. How do you go about creating a place as a character? And are we likely to see any places in New Zealand turning up in this context ?

A: Glasgow as a character really owes much to its people, folk who are blessed with natural good humour, friendliness and energy. Sometimes that energy is channeled into not such good places: our crime stats are nothing to be proud of. Yet it is a city with a warm heart, both cultured and couthy. In some ways it sums up the Scottish psyche; a split personality that has light and dark growing together. I would love to return to NZ but as yet there are no thoughts of using it in a future novel. Never say never, though.

A: I haven’t read a lot of contemporary NZ crime fiction. Reading mostly Liam McIlvanney recently. However Ngaio Marsh was one of my favourite crime writers when I was younger. Sorry, no real basis to compare Scottish and NZ crime but have to say our writers are pretty similar in outlook. We are the pussycats of the literary world!

Q: Could you perhaps go way back and tell us about the creative origins of your main protagonists Chief Inspector Lorimer and Solomon Brightman? Where did the roots of their characters originate.

A: How did Lorimer and Solly come to be? Well, Lorimer began as a very tall, rather remote person, very seriously involved in a major case. He was always dedicated and driven but I deliberately wanted to portray him as a normal man, so no hang ups, no chip on the shoulder, alcoholism etc and happily married (as I am). I think he owes a lot to a real life senior detective who helped me a lot in the early days called Ronnie Beattie. A nice, normal guy with exceptional talent and who commanded the respect of his fellow officers. Lorimer grew as a character over the books, unlike Solomon Brightman. I used to hear some writers claim their characters just appeared in a flash and I was derisory about this… till it happened to me! Solly did come fully formed in appearance, character and back story, much to my amazement. Years later I analysed where his name came from and I figured out Solomon the wise, bright man! I love them both dearly but am not above throwing some terrible things at them both. Kind of like real life, eh?

Q: How do you use social media to promote yourself, your work and Bloody Scotland.

A: Social media just Twitter @alexincrimeland and Facebook under my married name, Sandra McGruther. My middle name really is Gray and my late mother wanted me called Alexandra so it is shortened to Sandra for everyday use and Alex when I am being a book person. I do love Alex in crimeland as it reminds me of Alice in Wonderland, another character that plunged down into a rabbit hole full of interesting characters! I don’t have a blog but I do some blogspots to promote books, particularly my US titles. I love it when readers get in touch to tell me how much they’ve enjoyed a particular book: it makes all the hard work of writing so worthwhile.

P.S. promoting Bloody Scotland is mainly by Twitter but I talk about it a lot and have ‘trained’ audiences to say “hurrah!” henever I mention Bloody Scotland out loud. I love them for that!

Q: Who are your favourite authors and why? Crime or otherwise.

A: Favourite authors include Louise Penny, Ann Cleeves, Chris Brookmyre, Alexander McCall Smith. I do enjoy the latter’s sense of humour plus his refreshing take on life. Reading any of Sandy’s books is a tonic. Please spread the word about Louise Penny: begin with Still Life and read the books in chronological order since there is an overarching plot to them. Beautiful writer! Ann’s two series are great but I have to confess to a very soft spot for her Shetland series especially after driving through the island with her! Chris Brookmyre is a genius, simple as that! First of his books that I read, One Fine Day in the Middle of the Night, had me laughing so hard at his black humour that I literally fell off my sunbed onto the grass. That incident made him two other fans: my late Mum and my husband who wanted to know for themselves what made me crease myself with laughter! Incidentally my Mum was nursed in her final days by Chris’s aunt. Small world indeed. Nowadays I am really happy to call these four writers my pals! A privilege indeed.

Q: What did you enjoy most about your visit to New Zealand.

A: Most enjoyable aspect of visiting NZ is the people. What a nice, friendly bunch you are! Highlights include the Powhiri at Rotorua Noir, seeing lots of dolphins in the Bay of Islands, spending time in the nicest B&B’s in Coromandel and Lake Taupo. And, of course, all the wildlife and scenery. I so want to come back!

Q: What did you like best about Wellington Central Library and how do you think public libraries and authors can work best together to build a mutual reading community?

A: Wellington City library is perfectly located right at the Civic Square. I loved the user friendly displays of books, so easy to find titles. And of course it was a joy to find my books. Yippee! Meeting Neil Johnstone was great of course!

All of Alex’s fifteen works are available to borrow from the library. Below is a review of just one of her terrific books.

Still dark / Alex Gray.
“‘Alex Gray brings Glasgow to life in the same way Ian Rankin evokes Edinburgh’ Daily Mail New Year’s Eve should be a time for celebrating. But for Detective Superintendent William Lorimer, this is one night he will never forget… Called to a house after gunshots are reported, the carnage Lorimer finds there leaves him traumatised and questioning his future with Police Scotland. Meanwhile, the body count is rising on Glasgow’s streets. A number of known addicts are dying from accidental overdoses, but something’s not adding up. Where would the city’s poorest residents get hold of high-quality morphine?” (Adapted from Syndetics summary)