Hi Sarah, how are you today? Thank you for giving us the opportunity to contact you and ask you questions about your work. I have found your zine ½ at the library and it caught my attention because of how mysterious the cover l

ooks. I soon realised it is a really well made zine with a lot of content.

Hi Carla, thanks! I first came across zines when my housemate brought some home from Sticky Institute, a zine distro in Melbourne. I really liked them, so I started visiting Sticky a lot, and reading lots of zines, then I thought it would be fun to make my own.

Why do you think zines are important and why do people need to keep making them?

I love that zines are completely non-commercial; people just make them for the joy of it. The writing can be terrible and it doesn’t matter. So to me that’s important. Having this accessible medium where people can express whatever they want and there’s no censorship, no editor, no sponsorship or commercial stakeholders… it doesn’t need to attract advertising. A zine can never be colonised by advertising because then it would cease to be a zine. People need to keep making zines so that we can share stories and ideas that aren’t found elsewhere. 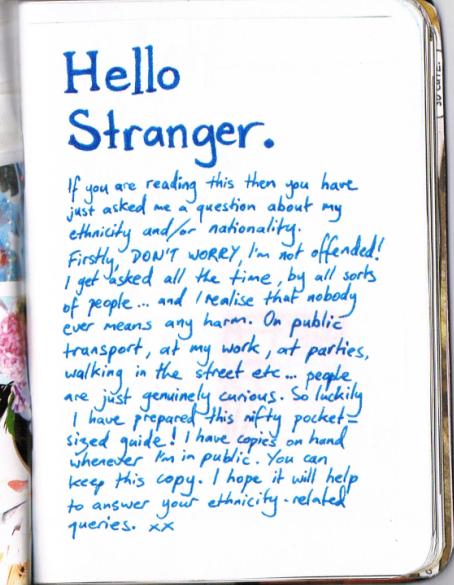 What do you like and dislike about zines in general?

I like the intimate nature of zines. I like their physical form – little handmade things. I like trading zines and sending and receiving letters in the post. I can’t really think of anything I dislike… even crap zines have their place!

½ explores controversial issues such as race, ethnicity, gender and body image. Why did you think you needed to cover these topics? Is this content by any chance related to any personal experiences?

Yes! Absolutely it’s related to personal experiences! I’m mixed race so because of my ambiguous appearance I’ve always had people enquire about what I am, exactly. When I made the first issue of ½ it was during a period when I was getting a fairly high hit rate of the ethnicity question – about once or twice a fortnight. So the first issue of ½ looked like an Australian passport and it gave a detailed explanation of my nationality (Australian) and ethnic background (Anglo Celtic and Chinese). I gave copies to anyone who asked where I was from.

I think the world is very confusing these days and sometimes it’s hard for people to tell whether or not they’re being racist or sexist, so maybe my zine can help them.

In your zine you analyse the issue of racism. You mentioned in the zine the concept of “racism against white people”. Could you explain what it means to you?

To me “racism against white people” is simply what it says, it’s any form of racism directed towards white people. For example, if I said “all white people are fat and lazy” that would be a pretty racist and incorrect generalisation!

However, it gets more complicated because racism can exist in many ways; it’s not just about making pointedly racist remarks. I’m most interested in the broader social contexts. I try to look at the power structures of our society, and in Australia, we have a social structure of white privilege. Of course many non-white people can be racist! But calling a white person names doesn’t necessarily change the overall structure.

I’ve witnessed conversations about racism in Australia, where a white person will bring up some small anecdote about this time they heard a non-white person say something racist about white people, or a time when they felt awkward because they were the only white person around, as if to say ‘well everyone’s racist! Why are you minorities complaining?’ But it’s not the same thing, because in the Australian context a white person generally has more social, political and economic power. White people aren’t always aware of this privilege.

I saw an interview with the politician Pauline Hanson, it was from the nineties when she was in her heyday, and she was complaining about how uncomfortable she felt in places where people didn’t speak English, and how wrong it was to have suburbs in Australia that were “clearly based on one ethnicity”. I remember thinking, ‘um, most of Australia is clearly based on one ethnicity Pauline! You only notice when it’s not yours!’

What other zines have you made? What are they about?

My friends and I made a zine called “Spring Chicken Old Chook” for a university project. We visited old folk in a nursing home over a few months and they told us stories about what life was like when they were in their twenties. We wrote down the stories and compiled them into a zine, then gave copies of the zine to all the oldies who’d contributed. The title came from an eighty-five year old woman who told my twenty-something friend, “you’re just a spring chicken, and I’m an old chook!” I also made a zine called “Slutz” that was a parody of Bratz dolls and tween marketing.

Do you have any favourite zines that you would like us to read?

Oh that’s a hard one, because there are so many zines! Not long ago a boy I liked sent me a copy of “Sutures” by Amanda at Tiny Paper Hearts . It was really good. I sent him a copy of “Happy Times Comics and Stories, Fifth Issue“.

At the end of 1/2 you included a TED talk, I watched it and loved it. Are there any other TED talks you would like to share with us?

Isn’t Chimamanda Adichie’s speech brilliant!? I’m glad you enjoyed it! They’re not TED talks, but these are some great videos on the topic of race…

Don’t forget to come to the zine collection and check out Sarah’s awesome zine!