Military : Lest we forget 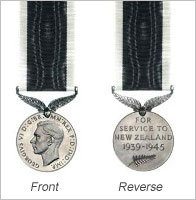 On August 4th 1914 war was declared in Europe and as a result, many New Zealanders embarked on a mission they would not return from. Someone's father, someone's husband, someone'Âs son, someone's daughter lost to the ravages of war, lest we forget. We are now commemorating 100 years since the outbreak of World War I and remembering those fallen who gave their lives in defence of King and country.

What, may you ask, does this have to do with genealogy? Well, those fallen are somebody's relative, I know one of them was mine. This page will hopefully help you find missing family members through military records.

Military records can provide splendid details for genealogists, especially ages and places of birth, while they can also expand family histories with information about campaigns, conduct and even physical descriptions of ancestors.

Where to start? This page aims to provide some answers to this question.

A Tommy in the family : First World War family history and research, by Keith Gregson.
Almost everyone's family history is connected with World War one. With the 100 years anniversary upon us there is a wealth of new books on social conditions. Even if your family stories and situations are not reflected here, these family investigations shine a light into the conditions and events of the time which touched so many lives. What makes this a valuable resources for the genealogist is that is also gives insights into how the researcher found and followed up their leads - sometimes chance, painstaking analysis and always the keen detective qualities needed by a genealogist.

My ancestor was in the British Army : how can I find out more about him? by Michael J. Watts & Christopher T. Watts.
Although books can date quickly as more and more records are digitised, this is still a useful resource to consult if you are following up ancestors in the army. Both online resources and records only held in archives are included, beginning from 1660. Described by Family Tree magazine as a "must read".

Tracing your army ancestors by Simon Fowler.
Although written for the English context, this is a welcome addition to this branch of genealogy. Whether you are interested in the career of an individual officer, researching medals awarded to a soldier or just want to know more about a particular battle or campaign, this book will point you in the right direction. It assumes the reader has no prior knowledge of the British army. He also describes resources available online as well as books and campaign histories. Drawn from the book jacket. 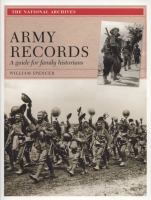 Army records : a guide for family historians, by William Spencer.
"The UK National Archives' exceptional collection of military material covers more than four centuries of Army life. This practical, accessible guide to its holdings, and those of the British Library's India Office, includes many records recently released or newly available online. It shows how to explore the files of thousands of First World War soldiers, prisoners of war from the Second World War and Korea, and the women who served in the WAAC or nursing services. Army Records offers expert advice on researching a wide variety of orders, decorations and medal rolls-from the Napoleonic Wars to the Falklands-as well as the documents surrounding key regiments, such as the Household Cavalry and the Royal Artillery. .... Whether you are tracing an ancestor, auxiliary service, regiment or campaign, it is an invaluable guide to Britain's military past. " (Syndetics summary)

Karori and the Boer War : men of Karori, Makara and Ohariu who went to war / by Michael Whitfield Foster.
Contains information on the assembly of the first contingent at Campbell's farm in Karori (now Ben Burn Park) - men of various contingents who had a connection with Karori, and their Boer War records and their many problems. Postscript from Canterbury.

New Zealand military nursing : a history of the Royal New Zealand Nursing Corps, Boer War to present day , by Sherayl Kendall & David Corbett. (1990)
Lists name, service no., rank, where and when trained, where they served and any awards. Portraits of higher ranking personnel also included.

Family Tree Magazine is a British publication that comes out on a monthly basis. It contains interesting and informative articles, book reviews, a computer section and feature regular articles on tracing family members through military records.
The magazine also has a webpage with a very useful online searchable index. There is also a links page.

Ancestry Library is now available from internet PCs within our libraries. Contains millions of records accessible in one powerful search.

This is up to and including the Boer War.

Imperial regiments in New Zealand, 1856, 1862 & 1864 : Hart's army lists [microfiche]
Lists used are for Officers of the Imperial Regiments that served in New Zealand during the Land Wars.

The Times history of the War in South Africa, 1899-1902, edited by L.S. Amery.
A rare find in our Stack room, this 7 volume set is along the same lines as The Official history of New Zealand in World War II, except from and English perspective.
What makes this set so interesting for genealogists, is the index. Not only does it give the usual regimental and campaign references, it also has quite extensive personal name references. If a portrait is featured, this is also mentioned in the index.

A couple of examples are:

Military Board appeals, Otago Witness, Dec 1916 to Feb 1917, by M.J. Kelly.
Lists appellant's name, occupation and area where they reside. Sometimes other family members are listed. Also try your local papers for similar board hearings.

The Official History of New Zealand in World War II is 27 volumes covering New Zealand's involvement in the 1939-1945 war, from the Western Front to Africa and the Pacific. They are available in either book form at Wellington City Libraries, or, electronically at the New Zealand Electronic Text Centre. The advantage of the electronic format is that they can be keyword searched.

This is post WWII including Korean and Vietnamese Wars.