Sunday 14 October was the 65th anniversary of the first manned supersonic flight by Charles “Chuck” Yeager in the experimental Bell X-1 research rocket plane.  In celebration of this feat here are some of our books on supersonic flight.

Faster than sound : the story of supersonic flight / Bill Gunston.
“This is the fully revised and updated story of how British and American test pilots pierced the sound barrier in the late 1940s, support with many new photographs. Since then much has happened in the advancement of supersonic flight. As recently as 2003, tens of thousands of fare-paying passengers were routinely enjoying transatlantic intercontinental air travel at speeds of up to Mach 2 on Concorde. Internationally acclaimed best-selling aviation author Bill Gunston OBE describes in accessible style the rules and technologies of supersonic flight, developments in engine and airframe technology, the age of supersonic passenger transports, and advances in supersonic fighter and bomber design.” (Syndetics summary)

Into the unknown : the X-1 story / Louis Rotundo.
“Until Ezra Kotcher of Wright Field and John Stack of the National Advisory Committee for Aeronautics (NACA) provided the leadership to convince officials to build a high-speed plane, public opinion was fraught with popular stories of a sonic “wall,” better known as the sound barrier. Now hanging in the Smithsonian, the X-1 was developed to conduct comprehensive flight tests and to acquire data in a scientific manner to demystify supersonic flight. The contributions of many people involved in the project are recounted, including Lawrence Bell, president of the contractor Bell Aircraft; Alvin “Tex” Johnson, Bell test pilot; and Chuck Yeager. Numerous first person interviews and exhaustive research into previously secret files relates the intrigue that surrounded the Mach 1 tests. Technical discussions of the aircraft design, power plant, and airframe are excellent, as are all the descriptions of the test flights, from the first to Chuck Yeager’s historic supersonic flight in 1947. The data gathered during this process helped set the stage for the X-15 and, later, for the space program. A significant contribution to aviation history.” (Drawn from Choice, courtesy of Syndetics) 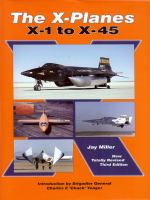 The X-planes : X-1 to X-45 / Jay Miller.
“This new and revised version of The X-Planes contains a detailed and authoritative account of each U.S. X-designated aircraft. Each aircraft is fully described, and coverage of history, specifications, propulsion systems, and disposition are included in a logical, readable format. Complementing the text are more than 900 photographs, many of which have never-before been published. Each X-Plane is also illustrated by an accurate and detailed multi-view drawing, which also provides color scheme information and scale data. Also included are appendices, an index, and miscellaneous tables. For aviation enthusiasts.” (Syndetics summary)