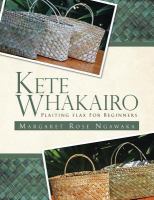 This month two substantial reports arising from Waitangi Tribunal claims have been published. There is an interesting bracket of scholars writing on inequality in New Zealand, and a small revised booklet on Māori pathways to leadership.

The Ngāti Kahu remedies report : Wai 45.
“This publication is a report by the Waitangi Tribunal into an application by Te Rūnanga-ā-iwi o Ngāti Kahu (Ngāti Kahu), an iwi of the Te Hiku (Far North) region. Ngāti Kahu sought recommendations from the Tribunal that the Crown transfer land and assets to them in order to remedy the prejudice caused by Crown acts and omissions previously found by the Tribunal to be in breach of the Treaty of Waitangi. Ngāti Kahu asked the Tribunal to use its binding powers to require the Crown to transfer formerly Crown-owned land to the iwi, some of which was in private ownership. The Crown and other iwi of Te Hiku opposed the remedies sought, as they involved transferring land to Ngāti Kahu that the other iwi already owned, or which had been earmarked for return to them through their Treaty claims settlements with the Crown. The Crown also viewed the application, if successful, as potentially destabilising its Treaty claims settlement programme, both regionally and nationally. The Tribunal concluded that, although binding recommendations were in this case not warranted, Ngāti Kahu were nonetheless deserving of remedy for the prejudice suffered. The Tribunal therefore made a series of non-binding recommendations that it believed would achieve this purpose”. (Publisher information)

Inequality : a New Zealand crisis / edited by Max Rashbrooke.
“A staggering rise in wealth disparity has transformed New Zealand from one of the developed world’s most equal nations to one of the most unequal. So dramatic has been this shift from a supposedly egalitarian society that the future has become difficult to grasp. What are the options for – and barriers to – tackling the gap between rich and poor? Inequality addresses these questions in the New Zealand context – a powerful argument from some of the country’s leading commentators.” (Publisher information)
Writers include: Max Rashbrooke, Robert Wade, Ganesh Nana, Jonathan Boston, Karlo Mila, Philippa Howden-Chapman, Sara Bierre, Chris Cunningham, Kim Workman, Tracey McIntosh, Cathy Wylie, Evan Te Ahu Poata-Smith, Paul Barber, Paul Dalziel, Nigel Haworth,Mike O’Brien, Linda Tuhiwai Smith.

Māori mentoring and pathways to wellbeing = Te huarahi o te ora / Rachael Selby & Alex Barnes.
“Whānau, hapū and iwi, education, sport and social service organisations will find the account of this marae-based whānau mentoring programme well worth reading. Ngāti Pareraukawa, a hapū based on the western side of Lake Horowhenua, set out to boost participation in marae activities by rewarding members with a bond to a mentor from the marae. Initally, mentees were young people; rangatahi drawn to the marae for support and the opportunity to set health and education goals. Almost instantaneously, their parents suggested that the mentoring programme be extended to include all whānau, regardless of age. Parents and grandparents set goals, attended hui, reported on their achievements and added a creative dynamic to the programme. This book records the first six years of the programme. It is marae-based, yet reaches out to North and South Island communities where clusters of whā̃nau reside. It has been supported by one of New Zealand’s most well-known philanthropic donors: the JR McKenzie Trust. This interesting donor-donee relationship is further explored and attracts the interest of the Philanthropic community.” (Back cover) 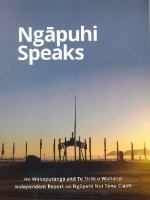 Ngāpuhi speaks : He Wakaputanga o te rangatiratanga o Nu Tireni and Te Tiriti o Waitangi = independent report, Ngapuhi Nui Tonu claim / commissioned by kuia and kaumātua of Ngāpuhi.
“The hearing of the Ngāpuhi Nui Tonu initial claim required the Waitangi Tribunal to look into the Ngāpuhi and Crown understandings of He Wakaputanga – often referred to as the Declaration of Independence – and Te Tiriti o Waitangi. This independent report considers the evidence presented to the Tribunal and, in particular, the assertion by Ngāphui Nui Tonu that in assenting to Te Tiriti they did not cede their sovereignty to the Crown”. (page one)