A number of Wellington City Libraries’ staff members were not born in New Zealand and have backgrounds that encompass many different countries, languages, and cultures. One of the many cultures we have represented on staff is Argentine.

A very cool new display has been put up at Newtown (after spending a month at Miramar and another month at Central) by librarian Axel, who is from Argentina and has been living in Wellington for a few years now. It shows off as much Argentine culture as is possible in a display cabinet, and if you check it out you will learn that Argentina has a LOT going on.

You can also sit down and listen to a selection of CDs from Argentina that have been hand-picked from our collection for the listener’s pleasure (and to prove that there is MUCH more to Argentine music than the tango). Or listen to the Spotify playlist.

Espero que disfruten la exibición tanto como yo! (I hope you enjoy the display as much as me!)

A number of Wellington City Libraries’ staff members were not born in New Zealand, and have backgrounds that encompass many different countries, languages, and cultures. This is ideal for any organisation that interfaces with the diverse population of Wellington, and all Wellingtonians love their libraries (of course!). A very cool new display has been put up at Miramar library (and will make eventually its way to Central on the 1st of July, in time for Argentina’s Independence Day on the 9th) by librarian Axel, who is from Argentina and has been living in Wellington for a few years now.  It shows off as much Argentine culture as is possible in a display cabinet, and if you check it out you will learn that Argentina has a LOT going on. Have a look at the gallery below.

You can also sit down and listen to a selection of CDs from Argentina that have been hand-picked from our collection for the listener’s pleasure (and to prove that there is MUCH more to Argentine music than the tango). Or listen to the Spotify playlist that Axel has created below. Espero que disfruten la exibición tanto como yo!

And if you have any questions or enquiries about any aspect of Argentina, the display or the music, don’t hesitate to ask Axel.
🙂

In early December, the 28th Māori Battalion Association held their final meeting; a decision which was made by the founding members themselves. Spokesman Matt Te Pou says “The vets don’t want the formality of running an incorporated society anymore – with ongoing meetings and AGMs – it all takes a toll on them.”

In total, 3,600 men served with the 28th Battalion during World War 2 in campaigns across North Africa, Greece, Crete and Italy. They were a front-line infantry made up of volunteers who served with valour and distinction. There are now 26 Māori Battalion veterans, with less than half able-bodied.

A powhiri and a formal remembrance service was held at Pipitea Marae to acknowledge the remaining veterans, followed by a luncheon. There was also a National War Memorial Military Service in the morning with the Governor General and Associate Minister of Māori Affairs as Guests of Honour.
–(adapted from www.scoop.co.nz)

Here on the second floor of the Central Library, we’ve put together a display to commemorate the event. Do come and have a look.

We also have a number of books on the 28th Māori Battalion:

Official history of 28 Maori battalion.
“John Douglas Publishing is delighted to be able to produce this work with kind permission from Manatu Taonga Ministry for Culture & Heritage and the 28 Maori Battalion Association. This is the official history of one of the greatest fighting infantry units of World War II, the 28(Maori) Battalion. We have done everything possible to ensure the book is as close to the original, printed in 1956. As Lieutenant-General Bernard Freyberg wrote in the foreword to the book: “In this history you will read the whole story – how they went overseas from New Zealand in 1940, with the Second Echelon to England, to take part in ‘The Battle of Britain’. In many campaigns this Battalion took a great part, often a decisive part, in the fighting. But as glorious as these battles were, and as gallant and brave as was the Maori part, it is not only of their bravery but what fine fighting men they were. “To know and appreciate their great qualities you must understand their background and their tribal traditions. Maori are a fighting race, and according to their traditions and in keeping with the laws of New Zealand, they did not come under the National Service Act, which called up men when they reached the military age. The Maori was always a volunteer. For them it was an honour to serve.” – adapted from Wheelers. 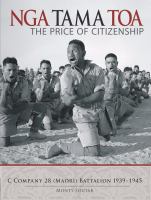 Nga tama toa = The price of citizenship : C Company 28 (Māori) Battalion 1939-1945 / Monty Soutar ; [foreword by Henare K. Ngata]
“The fascinating story of C Company, Maori Battalion told through personal recollections, eyewitness accounts, numerous anecdotes and amazing photographs. At times heart-rending, at times heart-warming, this impressive book captures the special ‘spirit’ of the Maori Battalion – an amazing book that documents the stories of those who were actually there.” – Books in Print

Maori in the great war / James Cowan.
“Maori form a significant proportion of the modern New Zealand Army, and Maori officers have achieved the very highest commands, Their unique culture is deeply embedded in its tradition and daily routines; celebrated by Maori (indigenous) and pakeha (non-indigenous) soldiers alike. The exploits of the 28th (Maori) Battalion in WWll – peerless in attack – are well-remembered. Not so well known is the major Maori contribution to the Allied cause in the Great War. Maori were quick to respond in 1914. Over five times as many as the specified contingent of 500 men volunteered, and that number of places was allocated on a tribal basis. As the centennial of the start of WWl approaches, it is timely to revise and republish Cowans 1926 work.”–Publisher’s description.

Victoria Cross at Takrouna : the Haane Manahi story / Paul Moon.
“In May 1943, Lance Sergeant Haane Manahi of 28th Māori Battalion was recommended for a Victoria Cross by four Allied generals, including Freyberg and Montgomery, for his astonishing feats of bravery at Takrouna, Tunisia. However, the award was mysteriously downgraded to a Distinguished Conduct Medal. This biography of Haane Manahi details Manahi’s courageous acts during the battle in the Second World War and uncovers the events surrounding the Victoria Cross recommendation and its downgrading”– Back cover.

Te mura o te ahi : the story of the Maori Battalion / Wira Gardiner.
“In the history of New Zealand warfare, few fighting units have eclipsed the achievements of the 28 (Maori) Battalion. Formed at the outbreak of World War Two, the Battalion gained a reputation for fearless aggression in numerous encounters in Greece, Crete, the Western Desert and Italy, finally returning to New Zealand in triumph in 1946. In this concise and highly readable book, Wira Gardiner recounts the full story of the Maori Battalion, from it early beginnings to its eventual disbandment. It is a fascinating story of daring and adventure, of heroism and bravery, of victory and tragedy. ” – adapted from Mighty Ape.

Ake, ake, kia kaha e! : songs of the New Zealand 28 (Maori) Battalion.
Radio New Zealand/Nga Taonga Korero recordings of the Battalion while it was in North Africa and southern Italy. There are spoken messages, situation reports, concert medleys aimed at tribal areas from which the men were drawn, a song of remembrance by Pacific Island members, and a previously undiscovered message from Princess Te Puea Herangi at a farewell concert in New Zealand.

Te Hokowhitu a Tu : the Maori Pioneer Battalion in the First World War / Christopher Pugsley.
“In Te Hokowhitu a Tu, distinguished military historian Christopher Pugsley recounts the story of the Maori Pioneer Battalion for a new generation. Drawing on rare archival material and previously unpublished diaries and letters, he not only tells the wider story of the Battalion’s military exploits but also gives a vivid account of daily life for soldiers on active service. Illustrated with a large number of fascinating photographs, the book includes a complete list of soldiers who fought with the Battalion that will be of particular interest to their descendants.” – adapted from Wheelers

Awatere : a soldier’s story / Arapeta Awatere ; edited by Hinemoa Ruataupare Awatere.
“Arapeta Awatere was a humble man born in 1910 at Tuparoa on New Zealand’s East Coast; in World War II he served his country with distinction in fierce fighting, rose to the rank of colonel and led the 28 (Maori) Battalion. Post-war he became a distinguished community leader, an Auckland city councilor, an orator and a genealogist. In 1969, at the age of fifty-nine, his life shattered. He was convicted of a crime of passion – the murder of his mistress’s lover – and he ended his years in prison. This book is part of his legacy: the passion, insight and pain left by an indomitable spirit and strong intellect whose life’s work was nearly foundered in one night. Awatere: A Soldier’s Story gathers together his autobiography, many of his poems and songs, and two essays. Readers of this book will long remember one of the great figures of twentieth-century New Zealand.” -Huia Books

As part of Heritage Month 2010, in association with the Wellington Region Heritage Promotion Council, a new display has been installed in the display case on the 2nd floor of Central.  Looking at the theme of the Environment, highlights include our copy of Sir Walter Buller’s A History of the Birds of New Zealand and Gideon Mantell’s (the “discoverer” of dinosaurs) paper on the exsistence of the Moa in NZ.  So if you’re passing by the 2nd floor, stop by some time to check out this new display.