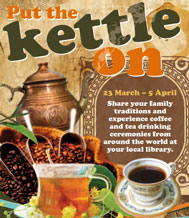 So far we have had Gongfu Cha at Johnsonville library, English morning tea time with Ruth Gotlieb and last Thursday night we had Masala tea with Shani and Joji of Ispice at Karori library. I had the pleasure of listening to Shani’s presentation and tasting their wonderful Masala tea, and it was excellent! If you missed out  it is not too late, the demonstration will be repeated in Mervyn Kemp (Tawa) library next Thursday from 7-8pm. All welcome!

Friday night (April 1) at Newtown Library, Matt from People’s Coffee will talk about fair trade coffee growers’ traditions, and you will have an opportunity to sample some of their delicious coffee. And last but certainly not least Oromia – Ethiopian coffee ceremony with Taitu Lemessa at Cummings Park Tuesday 5  April at 11 am.

Share your family traditions and experience coffee and tea drinking ceremonies from around the world at your local library!

Wellington City Libraries are also recording stories of cultural family traditions. We would love to hear you tell us about traditions that have been passed from generation to generation in your family, and record them to share with others. If you, or anyone you know, would like to talk to us please contact Ada Nally by phone 3892824 or email ada.nally@wcc.govt.nz

The sign outside says : Kom d’r in! koffie en stroopwafels!

Dutch seniors have been meeting on Wednesday mornings at the Island Bay Community Centre for many years, the coffee is good and although there were no stroopwafels *, plenty of other Dutch delicacies were on offer.

When I asked what the coffee was like when they first arrived in Wellington in the 1950’s the answer was unanimously: “There was none!”

How things have changed now in Wellington, apparently there are more coffee places to go to per head of the population than in New York!

A big thank you to the Dutch coffee group for letting us eavesdrop on their recent session talking about their memories and customs. Check out this videoclip!

* a stroopwafel is a waffle made from two thin layers of baked batter with a caramel-like syrup filling in the middle. They were first made in Gouda in the Netherlands, in 1784. Large versions are sold in the streets as a snack.

We have the recently published Suzy’s: a coffee house history, by Susette Goldsmith which describes the local cafe mentioned in the video clip. Hope to you see at one or all of our “put the kettle on” events, all welcome!