The Shocking and Stunning

The shocking and stunning are Jack Hooker (synth/sampler) & Sam Lovrich-FitzPatrick (drums). They create dense, trance-inducing music which lies somewhere between dance/noise/drone. The shocking and stunning have been performing since 2010. They’ve released six EPs, a single, scored a documentary, collaborated with Tourettes and Name UL, toured a lot throughout New Zealand and Australia and have played a bunch of cool festivals. 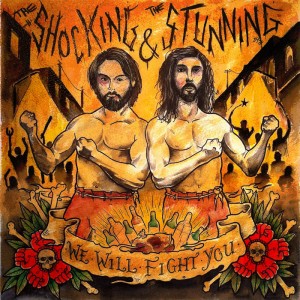 [Transcript]
“Musically focused on the intersection between drone rock (think: Sunn 0)), Godspeed You! Black Emperor) and wonky beat music (like Flying Lotus or Onra), Wellington two-piece ‘The Shocking and Stunning’ are “A rock band exploring electronic sensibilities,” according to synthesiser player jack Hooker. Assisted in his journey through sound by drummer Sam Lovrich-Fitzpatrick, as ‘The Shocking and The Stunning’ the two have released three limited run EPs, 2010’s ‘The Shocking and Stunning Statement’ and 2011’s ‘I’ve Them Them’, ‘They Were Cunts’ and ‘Camp’ EPs, all of which awe with their hypnotic trance inducing rhythms and thick layering. Both originally from Christchurch, they became friends ﬁve years ago at a small 250 person high school. “There were only a handful of people doing music there,” Lovrich-Fitzpatrick explains, while I share conversation and drinks with the bearded, long haired duo at a cafe on Cuba Street in Wellington. Having steadily practiced together in different forms since, they didn’t step out into the live arena until a couple of years ago. As a result, their fully ﬂeshed out soundworlds impressed almost instantly, once inspiring me to describe them as sounding like a ‘Clams Casino’ covers band after a stellar performance at a dingy death metal bar in Wellington’s red light district. Describing their interests outside of music as “partying” Hooker is three years into a sonic arts major at the New Zealand School of Music, Lovrich-Fitzpatrick on the other hand, works for Mojo coffee as a barista. Somewhat improvished or jammy in their songwriting approach, the two never consciously decide between practice and writing sessions, instead opting to just jam out together on a regular basis, letting the ideas form as they may. “I won’t write any riffs to bring to Sam, but I will work on some new patches for my synthesiser, so I can bring new tones to the music,” Hooker explains. Recording all their practice/jam sessions, songs emerge through reflection and repetition, bringing a studied depth to the music. “We like to take it past the point of a fun song and try and get immersed,” he says. “We strive for that intensity of sound, that physicality where you can get lost in it.” And with interest growing around the country, as well as in Australia and America, it really feels like it’s only just a matter of time. An often disregarded truism, quality can attract quantity.”

Cover sourced from Bandcamp. Bio courtesy of Jack Hooker.
‘Who’s Next’ sourced from Rip It Up, No. 346, April-May, 2012. Photo by Christopher Andrews ﬂickr.com/fraew.
Used with Permission.