The Eighth Note is 8 quick Questions with Wellington Musicians. A chance for us to catch up with people & see what they’re up to, or introduce you to a new musician/band and their music. Up next is pianist and composer Samuel Philip Cooper.

Who are you? Tell us a bit about your music:
My full name is Samuel Philip Cooper – I go by ‘Samuel Philip Cooper’ as my stage name, as there were several Sam Cooper’s and Samuel Coopers on Spotify, and I wanted to stand out! Plus I thought it would be a nice touch to have my Grandpa’s name in my stage name too! I am a contemporary classical solo pianist and composer. My compositions are soft soothing and at some points, intense. Ultimately, they are healing and through them, I aim to tell stories of tough times I have faced in my first 27 years of life. A key part of my compositions and music journey is to raise awareness, and where possible, money for mental health. In late 2020, I released my 18 song debut album, ‘Breaking the silence’, and through ongoing CD sales and a Givealittle fundraiser, I have raised over $2,500. Through concerts and gigs, I aim to keep adding to this total.

I love to play covers of all genre’s of music – whether it be classic rock and pop hits from the 60’s, 70’s and 80’s, 2000s, 2010s and today’s top hits (including euphoric drum and bass songs), those following me will hear me playing them. I started playing the piano at age 5, getting keyboard lessons at primary school, but quit at intermediate. I hated reading sheet music – I struggled and I had my own way of playing, much to the frustration of my teachers. I primarily played by ear, and still do to this day – I cannot read sheet music easily, though, this is something I want to work on! Outside of piano, I am learning (by doing!) to produce on Logic Pro, and am beginning to collaborate with other musicians and producers. Recently, I have ventured into the genre of drum and bass, and collaborated with some up and coming drum and bass artists in Wellington (CSM and Rit) on new songs and ideas. 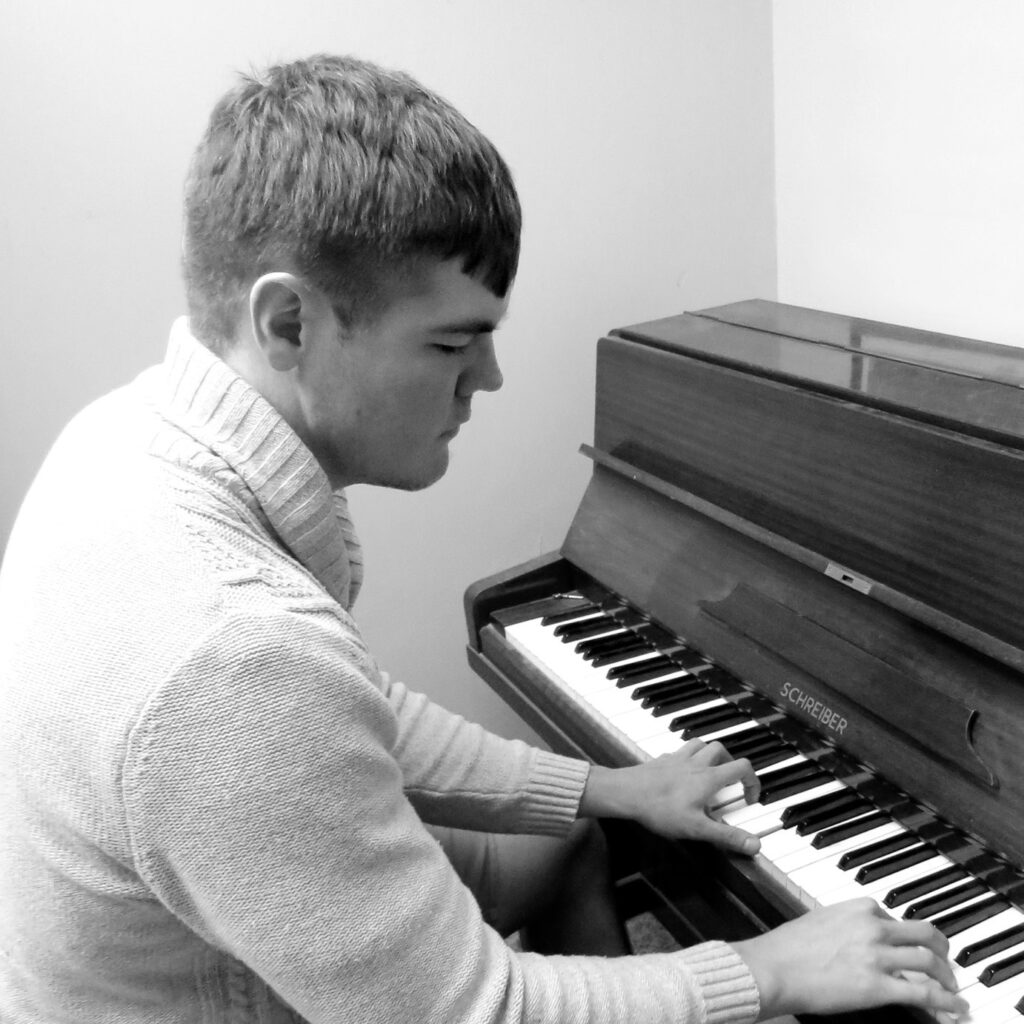 What have you been working on lately? Any new tracks or albums on the way?
I have a new solo piano composition called Same Mistakes that came out on the 24th of June. Following that, I have a new song coming out every 4-6 weeks for the next 12 months, and will include all songs on an album as part of the last song release. I have been improvising new classical melody’s and improvisations. I regularly improvise and record myself, and then add them to my YouTube improvisation series. They are the list of songs in which I go back and listen to and decide on my most favourite(s) to then develop further. I have been working on some new euphoric drum and bass songs in collaboration with Wellington drum and bass artists, CSM and Rit. I hope I can release them to the world one day – I would have to create a character name for a drum and bass name – at this stage, I am thinking of ‘Coopsanity’ or ‘COOPZ’! Get in touch if you have any thoughts!! 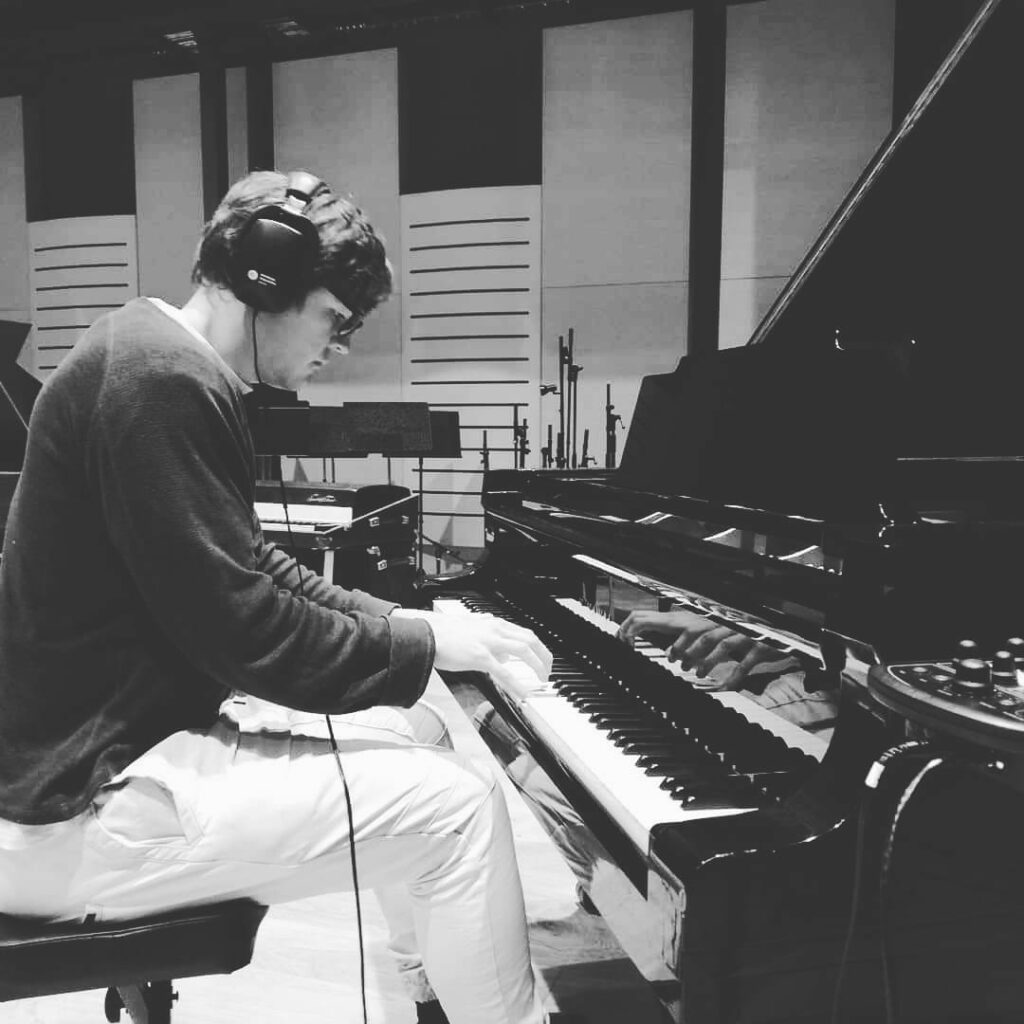 What were the 3 most influential albums to you growing up?
It’s a funny question, because when I was young, I hated classical music – all I wanted to do was jam to songs I liked and heard on the radio – not those in my music book that the piano teachers gave me. So, as a kid, I would say that the first album I fell in love with was Coldplay’s ‘Viva La Vida or Death and All His Friends’ album, Evermore’s album ‘Real Life’ and ‘Songs about Jane’ by Maroon 5. I would say my love for contemporary classical music started in 2014 at university – my 3 most influential albums would have to be ‘A Celtic Dream’ by Michele McLaughlin, ‘A new Kind of Love’ by Robin Spielberg’ and ‘Piano and Light’ by Brian Crain.

Whatís your favourite Wellington venue to play in?
Having only just decided to take the plunge and entering into the world of performing live (after much self-doubt and anxiety!!), I haven’t played in too many venues. I thoroughly enjoyed performing my first concert at the Goethe Institut on Cuba St – it would have to be that. I LOVE playing the colourful waterfront piano that used to sit near Frank kits park, but now is bought out during the Saturday and Sunday waterfront market. My dream would be to one day give a performance at the Michael Fowler Centre which is a venue I would love to one day give a concert at! 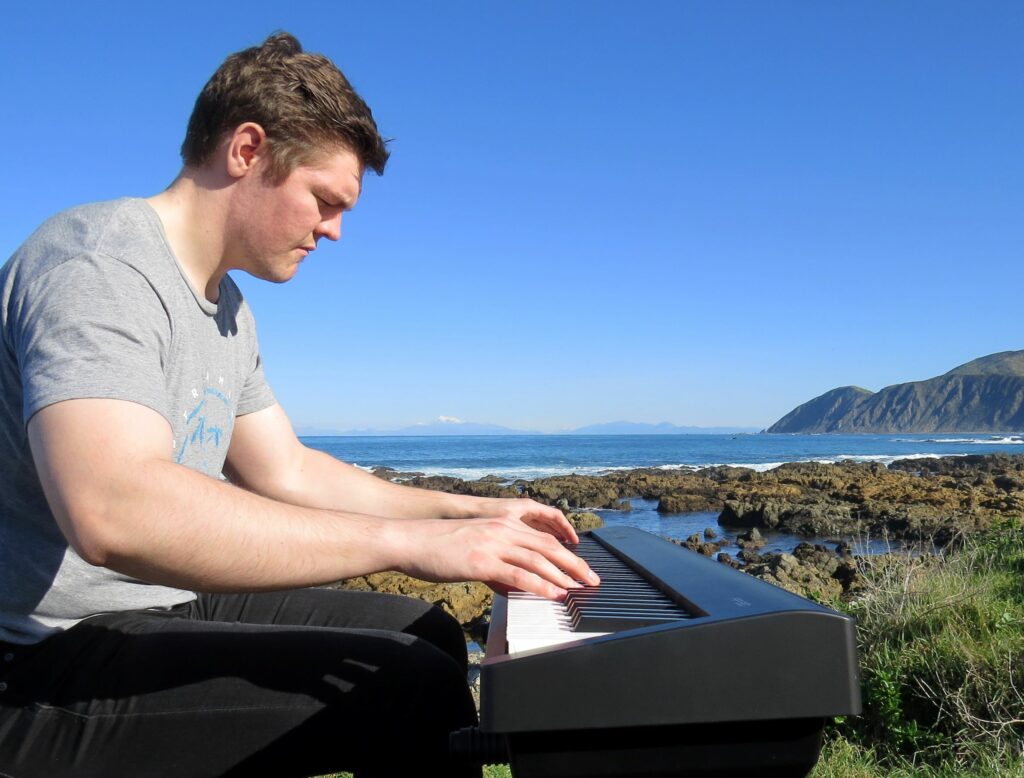 In your songwriting or composing (or the bandís songwriting) how do the compositions and songs take shape?
Most of my compositions start with a mood that I am in, and the playing piano simply a way for me to process and deal with my emotions through me expressing them on the piano, rather than talking to people about them (I have got better with talking about my emotions!). This particularly when I am down or sad/frustrated about something, i.e. being friendzoned, a bad/annoying day at work, or just general stresses/anxiety/regret/overthinking I feel which unfortunately often stays with me longer than it needs to! I then record my improvisation on my phone, and then add it to my YouTube improvisation series.

My songs always have a 3 or 4 chord progression, and the occasional change of key and/or the occasional alterative chord or two in a bridge bit. When I am keen to develop a song, I listen back, try and play and learn the improvisation by ear, and then listen back and try to remember bits, and then add alternatives to the right hand to make it sound nicer. I record everything, so that I don’t lose any ideas. This process is simpler now that I have logic pro, where I can record when I choose to structure a song, and I don’t lose any ideas. Previously, it was all on my phone, and I often played the backing progression, and played it and improvised with my right hand for developing new bits. Once I have enough ‘verse’ parts, the hardest part is to create an interlude to the next segment of the composition that isn’t too abrupt or obvious. This is often what takes the most time when I am composing I used this process with my first album. 5 of the 18 songs were semi-structured improvisations that I hadn’t yet fully completed – in the studio, I just got creative on the spot.

Where/when is your next gig?
I currently do not have any gigs finalised yet, but I am in the process of organising a performance for November in Wellington – stay up to date with my socials for an announcement hopefully soon. All tickets and drinks sold on the night will go to the Voices of Hope Mental Health Charity – it would great to get a great turnout to help raise as much money as possible! 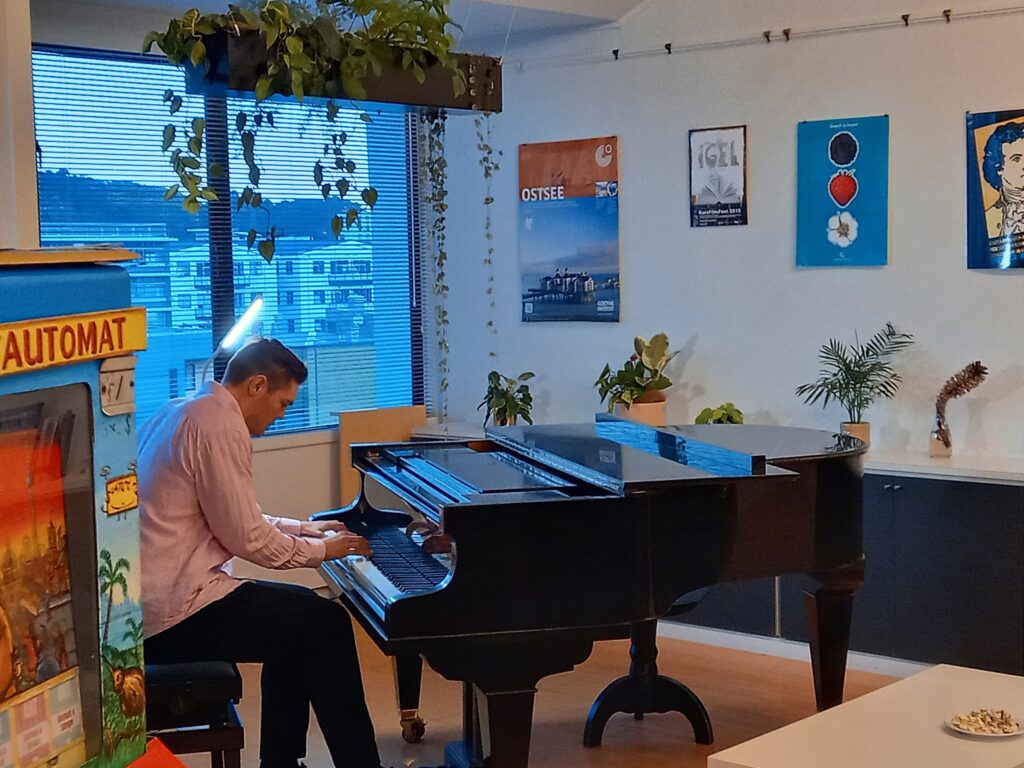 One Reply to “The Eighth Note: Samuel Philip Cooper”