The Eighth Note: This Silent Divide 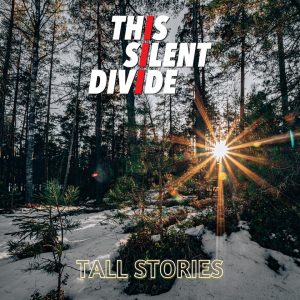 The Eighth Note is 8 quick Questions with Wellington Musicians. A chance for us to catch up with people & see what they’re up to, or introduce you to a new musician/band and their music. Up next is Shaun, Vocalist & Guitarist from This Silent Divide, who are about to drop their debut EP in November.

Who are you? Tell us a bit about your music:
I’m the singer and rhythm guitarist in 4-piece Wellington rock band, This Silent Divide. Our sound brings together driving drums, wall-of-guitar riffs and melodic overtones. We formed in 2018 and play live shows regularly around Wellington.

What have you been working on lately? Any new tracks or albums on the way?
We’ve played a few welly gigs in 2021 including CubaDupa which was great fun, but our main focus has been on pre-production for our EP and recording it in June. The first single Lucinda is out on 1 Oct, and then our second single ‘Don’t Give up’ and the four-song ‘Tall Stories’ EP are out on 1 Nov.

Where is the best place people can follow you & find your music?
Currently social media – Facebook, Instagram and YouTube. And soon, once we release our Lucinda single on 1 Oct, all the usual music streaming platforms – Spotify, Apple Music, Soundcloud, Bandcamp, YouTube etc.

What were the 3 most influential albums to you growing up?
Nirvana – Nevermind – this album was so different to most music and to what I was listening to at the time. It’s the only tape that broke due to me playing it so many times…then I got the cd.
Shihad – Shihad (the fish album) – seeing Shihad play this live regularly was revelatory. It’s what made me want to make the move from just watching awesome bands and guitarists play gigs to learning to play one.
Sommerset – Fast cars and slow guitars – epic live NZ punk band, who in my view deserved far more profile and recognition. So many energetic live shows and a great album, with catchy riffs that hurtle along.

Which other Wellington musician(s) would you most like to work with?
Jon Toogood (Shihad) – love his absolute passion for the craft, energy and live performance.
Julia Deans (Fur Patrol) – absolutely stunning voice, beautiful songs.
Matthew Hyde (Beastwars) – towering voice, huge and engaging presence live and a totally down-to-earth, nice guy to chat to.

What’s your favourite Wellington venue to play in?
Valhalla on Vivian St. It’s been through many names over the years, but the essence has remained the same throughout. Love the vibe, the PA is huge, that the people who go there really love their live music, and Ben the owner. He’s a brilliant guy – so supportive of bands and the local music scene across all genres.

In your song writing or composing (or the band’s songwriting) how do the compositions and songs take shape?
Our usual approach is that I or Kieran (lead guitarist) bring along the bones of an idea to the practice room and then we jam it out more as a band. We’ll often strip it down, re-assemble parts, alter, throw some bits out, change and refine the ideas until we’re happy we’ve created something we all love and that’s impactful. We each bring different perspectives to that song writing journey from our differing musical backgrounds across rock, indie, punk and metal. There’s often quite passionate debate as we move through it. But we’ve been together a couple of years now – there’s a joint understanding of what we’re trying to do and the respect that helps us navigate through it without anyone’s hair catching on fire. It’s important, I think, to have an environment where everyone can be open and honest about what they think – it gets a stronger result music-wise.

Where/when is your next gig?
We’re preparing for a 5-date North Island Tour to mark the release of our Tall Stories EP. In Wellington we have Holloway and Voodoo Bloo (also a single release for them) joining us for the show, so it should be a great celebration and evening out for welly music fans.
Tall Stories EP release tour show Wellington – Newtown Sports Bar – Fri 3 Dec.