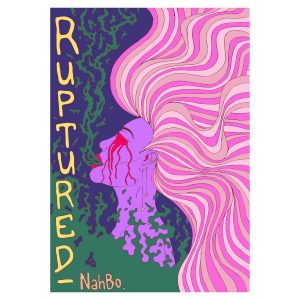 The Eighth Note is 8 quick Questions with Wellington Musicians. A chance for us to catch up with people & see what they’re up to, or introduce you to a new musician/band and their music. Up next is NahBo, who released their debut album last month.

Who are you? Tell us a bit about your music:
My name is Taranaki Ah Young-Grace, but when I perform my music I become NahBo. The music I write is primarily about the after affects of colonisation (ie – poor mental health, addiction, queer and transphobia etc etc), and I present it through a mixture of jazz-influenced hip hop, rap, RnB, neo-soul and electronica. I created the NahBo character that I perform as to kind of protect myself when I’m on stage. Otherwise I think the content would be too painful and make me feel too vulnerable to share it with strangers.

What have you been working on lately? Any new tracks or albums on the way?
I am currently 5 demos deep into a second album which will be about similar things as my first, but more focused on my mental health, the idea of radical hopefulness, and of resistance. I’m also working on streamlining my composition and beat making process for this second body of work.

Where is the best place people can follow you & find your music?
The best place to follow me is probably Instagram because I’m most active there, but I’m at the beginning of taking a month off of posting. You can find my music anywhere, but I like to direct people to Bandcamp because I’ve made it so you can download my music from there for however much or little you like (even for free) and I get a larger proportion of sales that way compared to streaming sites.

What were the 3 most influential albums to you growing up?
This is such a hard question! I think I have to include the first album I ever bought with my own money, which was Americana by The Offspring, embarrassingly enough. I don’t really vibe with them anymore, but I think the humour they brought to all their music is something that I still try to do.
Then there was Three Cheers For Sweet Revenge by My Chemical Romance which kind of saved my life as an early teenager. It’s cringey, but the raw earnestness and vulnerability of pop-punk and emo music from the early 2000s is something I will always love. Plus Ray Toro came up with some pretty sick guitar riffs in that band and on that album specifically.
If I really can only mention 3 albums, I would then have to say Joan Armatrading’s self-titled album Joan Armatrading. I’ve listened to that album probably 1000 times since I was a kid and I still find song writing inspiration in there. Joan really is a genius.
A sneaky fourth, if you’ll allow it, is In My Mind by Pharrell Williams, which really got me interested in the idea of beat making and producing. His sound is so iconic. I feel like since that album I can always tell when Pharrell has had a hand in the production of a song or piece of music, and I really love that.

Which other Wellington musician (s) would you most like to work with?
I really, really want to collaborate with Valentina on something in the hyper-pop world. She’s an amazing producer and I just think it’d be super fun. We’ve made soft plans to discuss something soon, so that might actually be happening!

What’s your favourite Wellington venue to play in?
I’ve had the best times performing at Valhalla and San Fran, but I also really enjoy the vibe at Moon. My favourite venues always end up being the ones with, who I interpret to be, the most caring sound engineers.

In your songwriting or composing (or the band’s songwriting) how do the compositions and songs take shape?
I usually start with a chord progression and then write a melody which I then match up with potential lyrics I have in my notes app. Most of my lyrics start as off the cuff one liners, stream of consciousness poems and rants, or are excerpts from conversations I have with friends, where I feel like they or I land on a way of articulating something in a succinct, or lyrical enough, way to put in a song. Then I expand it from there and decide on the arrangement. Once the arrangement is done I’ll go back and fine tune the lyrics.

Where/when is your next gig?
I don’t have any gigs planned at the moment. I’m an incredibly introverted person and am giving myself a chance to take a little hiatus from public facing things. I am working on a merch store though, so that’s something to look forward to I guess.