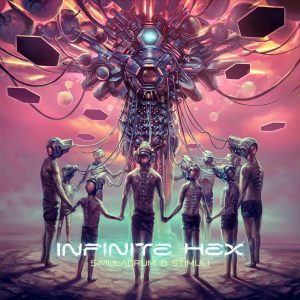 The Eighth Note is 8 quick Questions with Wellington Musicians. A chance for us to catch up with people & see what they’re up to, or introduce you to a new musician/band and their music. Up next is Otis Chamberlain, whose solo project INFINITE HEX has just drooped its debut album.

Who are you? Tell us a bit about your music:
My name is Otis Chamberlain, I’m 45 and have played drums, guitar (and more recently synthesizers) most of my life. I’ve performed in a bunch of various bands ranging from improv jazz, metal, grind-core, live drum&bass, hip-hop, noise-rock, hardcore punk and more. Currently, INFINITE HEX is a mostly solo, mostly instrumental, studio-centric project whose oeuvre is essentially a musical boil-up of all the styles I’ve done previously, or been influenced by in my musical journey. At a glance INFINITE HEX could be called electronic metal, but there’s a bit more to it once you peel the skin off.

What have you been working on lately? Any new tracks or albums on the way?
I just released my first full length INFINITE HEX album “Simulacrum & Stimuli” on August 20th. It’s a sculpted anthology of material written over the last 2 yrs. There are always works-in-progress with this project so new material is already underway.

What were the 3 most influential albums to you growing up?
Mr Bungle – Self titled, King Crimson – Discipline, The Fishbone – Give A Monkey A Brain. I love cross-over music and progressive/odd-metered music and generally gravitate towards music that is complex or hard to pigeon-hole.

Which other Wellington musician (s) would you most like to work with?
This particularly idiosyncratic project has been partly born out of a need for logistical economy, in that I work alone and am most comfortable micro-managing this very niche material, that and not having to rely on “other cooks in the kitchen” for the nuts n bolts of composition. That said, there is still a definite collaborative/guest component in the latter stages and this is typically vocal (e.g Callum Gay from Spook The Horses appears as a guest on the album). There are also plans to collaborative with a few long time Welly music peers who also dabble with modular synthesizer – Toby Laing of Fat Freddy’s Drop, Riki Gooch, and my long time drum mentor Ant Donaldson. Hopefully these collars will manifest on a future INFINITE HEX release.

What’s your favourite Wellington venue to play in?
INFINITE HEX is yet to perform live, but in general – for heavier guitar-centric stuff: always Valhalla.

In your songwriting or composing (or the band’s songwriting) how do the compositions and songs take shape?
INFINITE HEX is essentially a continuation of a former project (Ornithologist), where the writing style is a rapid-fire mash-up of various genres condensed into short-form (90-seconds or less) segues that would usually dovetail into each other. I often compare the end result to musical “channel-surfing”, but taking cues from both grind-core and glitchy electronica. There is still tension and release in the general forms, but its more like a continuous linear smorgasbord of bite-sized parts, than a traditional 3 course meal. During the period of arranging the material for the Simulacrum & Stimuli album I had begun exploring more long-form generative modular-synth textures, and in the process the definition of what an INFINITE HEX track should sound like opened right up. So now there is the chaotic riff/blast type stuff, the glitchy sequenced arpeggiation stuff, and now the spaced-out, atmospheric, generative stuff.

Where/when is your next gig?
Infinite Hex has been a studio-only project to date, but I’ve been assembling a short set of the sequenced/modular material for a low-key Noise-Drone-Repeat night at Valhalla on October 28th. Parallel to that, I’ve also recently connected with a drummer and begun arranging a set of the heavier riff-orientated material (comprising of tracks from the album), of which we’re aiming to have ready to perform in early 2022.