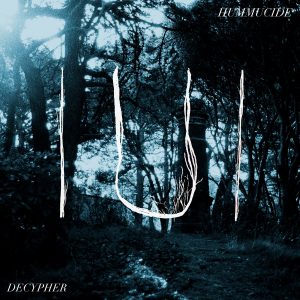 The Eighth Note is 8 quick Questions with Wellington Musicians. A chance for us to catch up with people & see what they’re up to, or introduce you to a new musician/band and their music. Up next is Toby from local Jazz-Rockers HUMMUCIDE, who have just dropped their 2nd EP ‘Decypher’.

Who are you? Tell us a bit about your music:
Kia ora, this is Toby speaking. We are a four piece group called HUMMUCIDE, featuring Ben Stewart (keys/synths), Toby Leman (sax), Hugo Olsen-Smith (bass), and Lennox Grootjans (drums). We met at NZSM Te Kōki Jazz School in 2016 and have adopted many of those traditional jazz practices such as improvisation, and taken them to the indie band scene that is currently booming in Wellington. We have loved performing with many like- and open-minded musicians who can bring new and fresh ideas and approaches to form a distinctive sound that represents the community of which we are a part. Our music is inspired by jazz as well as many other dispirite influences that cross genres.

What have you been working on lately? Any new tracks or albums on the way?
Our latest EP ‘DECYPHER’ came out on Friday 20th August, which was our second collection of four compositions. We have plans to record more original work but the recording/mixing/mastering/releasing process is slow and takes a lot of energy, so we’re pretty happy to sit on this second release for now.

Where is the best place people can follow you and find your music?
We have Facebook and Instagram platforms, as well as Bandcamp, Spotify and Apple Music. These are all great forums that can notify listeners of new releases and some have the capacity for live show information as well.

What were the three most influential albums to you growing up?
For me, I went through an intense classical music obsession between ages 13-16, and as a saxophone player, John Psathas’ album View From Olympus was a true inspiration for me. I was fortunate to meet John Psathas, a renowned Wellington composer, as well as Lance Phillip, a performer on the album and lecturer in the jazz programme. Another great album is Thimar performed by Anouar Brahem, Dave Holland and John Surman, and thirdly Ultrahang by Chris Potter’s Underground Quartet. These two albums really informed my playing and writing styles to this day, and I often listen again and hear new things that I have not heard before.

Which other Wellington musician (s) would you most like to work with?
I guess one would have to John Psathas although I can’t help but feel that he is in a league of his own. We are really spoilt for choice in this city; there are many musicians that we four have dreamed of playing with, and some of the musicians we currently play alongside were once in the dream category.

What’s your favourite Wellington venue to play in?
San Fran.

In your songwriting or composing, how do the songs or compositions take shape?
Ben and I write all the compositions individually and then workshop them with the band. My compositions usually comprise several related sections of ideas, and the band is great at arranging the ideas into coherent arrangements that give the ideas time to breathe and develop. The workshopping process is usually where most of the final arrangements take shape, because it is easier to experiment with the group as we have a lot of history and musical communication. This is also my favourite element of the process where you have the freedom to explore and take risks.

Where/when is your next gig?
We’ve taken a small break while the EP was being released and have a few gigs coming up! Follow us online and those gigs will be announced soon I’m sure :^)