New Album: Terror of the Deep 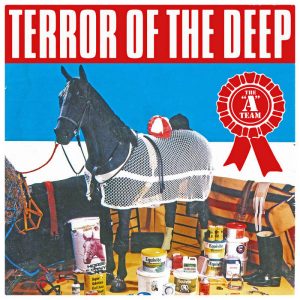 ‘New Album’ is where a band or artist answers some questions about their latest release. Up next is William from Terror of the Deep, who have just released new album ‘The A-Team’.

When/where was the new album recorded?
Half of the album was recorded in 2016 at The Phoenix Foundation’s old studio in Berhampore that was called The Car Club (we were the last band to record there before it was demolished), and the other half was recorded in 2017 at a studio in Newtown called Building M.

Who produced/engineered the album? How did the tracks come together in the studio, or at home?
Tom Watson, who also keys in the band, engineered and recorded the 2016 Car Club sessions, and was also responsible for engineering and recording the overdubs for those session at his studio, called Brownhead. Warwick Donald engineered and recorded and 2017 Building M sessions and subsequent overdubs on those, and he mixed the final album too, doing an excellent job of making the songs from the two quite different aurally sounding sessions sound resemblant on of the final album. All songs were initially rehearsed in our practice room, and then were road tested whilst we were on tour, but not to the point that we had overplayed them and that they were still fresh to us all.

How did the songwriting happen? Are there any overall themes within the songs/album?
All songs were brought to the practice room by their respective writers almost fully formed; we would then rehearse them as a band and flash out any further arrangements in the practice room. Unlike our last album, which was intentionally a concept album about space exploration, there was no intentional theme for this album.

Were you going for a different sound/approach on this album?
Not intentionally. However, we had had people who have heard the album say that this is the most stylistically varied album we have made to date, however that was due to accident rather than design.

Is there a particular single/track that you feel captures the essence of the album?
I’m a bit too close to the project to give an objective opinion, but my personal favourite song on the album is Tonight.

Is there a physical copy available? If not, which digital platforms is it available on?
The album will be released through the usual digital avenues (Bandcamp, Spotify, etc…) on 1 May. It will be released on cassette by two separate labels; Hobbies Galore in Melbourne and Melted Ice Cream in Christchurch in the next few months. It will also be pressed on vinyl by our New York based record label, Selection Records, later in the year.

Are you working on a video/videos for any of the songs? Are you doing any gigs or promotion for its release?
Our album launch show is happening at Moon in Wellington on 4 May, and we also have a few shows booked in Christchurch and Lyttelton in a few months’ time. It’s been a while since we have properly toured so no doubt more shows around the country will be added in due course. No video plans yet but one will more than likely be made soon.