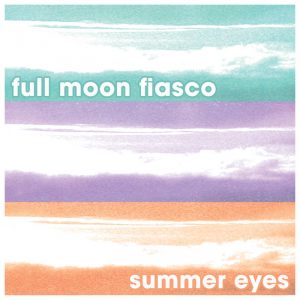 ‘New Album’ is where a band or artist answers some questions about their latest release. Up next is Berlin based Full Moon Fiasco, who have just released their long anticipated 2nd album Summer Eyes’.

When/where was the new album recorded?
The album was recorded in Newtown flat by the zoo, by the beach in Waikane and in a converted office (now rehearsal) space in one of Berlin´s industrial areas.

Who produced/engineered the album? How did the tracks come together in the studio, or at home?
I engineered and produced the album, it was mastered by Bevan Smith. There was never a studio as such, just a mobile set up that moved around. Most of the writing happened beforehand and then the initial instrumental parts would be played live or partly live. Afterwards I added synths, percussion, vocals etc. The overdubs were done in various places depending where I was.

How did the songwriting happen? Are there any overall themes within the songs/album?
For this album I wrote a lot on a guitar before hand then when I had the basic structure, the melody and the feel I would teach it to the other´s who were going to record it as well. Sometimes just starting with drums, sometimes with bass and organ or synth as well. There was also a couple of improvisations recorded in the makeshift set up live and one piece that uses samples and was built up from there. There is no theme as such. But it does contain reflections of where I was, and what was happening in waking and dreaming life.

Were you going for a different sound/approach on this album?
I really wanted it to sound like there is a subtle movement through the whole thing. Like the pitch is changing, just a little all the time over particular frequencies. It was also a more ´live´ album than the last one Cosmic Palms.

Was there any specific gear you used to capture that?
For the live tracks I used a larger tape machine than I had used before, an 8 track reel to reel, as there were more tracks that needed to be recorded simultaneously. It wasn’t running that well though, and there was only one tape, an old Letterbox Lambs session. Once we got to the end, I would bounce down the 25 minutes of recording straight to four tracks on the computer. The reason being that I thought I had an 8 input soundcard coming, but it turned out to be only 4 and I couldn’t get another one in time! That made for some interesting on the spot mixing. Later on I did a lot of processing with different modulation devices and reverbs, layering textures under the finished tracks. Starting with tape machines and moving to digital seems to work the best for Full Moon Fiasco albums.

Is there a particular single/track that you feel captures the essence of the album?
Not really one. They fit together quite well I think. Each adding a little piece to the whole. I do have tracks that I prefer to listen to though. Plantation for instance.

Is there a physical copy available? If not which digital platforms is it available on?
Yes! There is a limited edition run of vinyl and cassette available via Fantasy Fiction Records. But you can also listen on Bandcamp, Spotify, Youtube etc.

Are you working on a video/videos for any of the songs?
There are two videos, one for Sight Unseen My Pixie Queen and one for Diamond Dancer. Both are already up online. I think there will be one more to come. But for now that´s in the works.