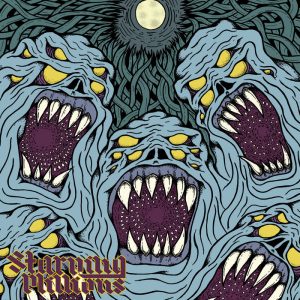 ‘New Album’ is where a band or artist answers some questions about their latest release. Up next is Starving Millions, whose new album ‘V’ was released late last week.

When/where was the new album recorded?
We recorded this album in July/August mostly in our rehearsal room at Toi Poneke. A few parts were added at Dave’s house and all the vocals were done at our friend Jimmys as he has vocal booth set up.

Who produced/engineered the album? How did the tracks come together in the studio, or at home?
We produced the album ourselves, we had complete control over every step of the process and could be quite flexible with how we did things. Throughout recording we shared the tracks on dropbox to give feedback on the mix and sound.
Peter recorded his guitar parts first so that Sam could write lead lines at home and then bring to recording. Sam created the first half of the intro track on his set up at his house and then set to Dave for Mixing and mastering.

How did the songwriting happen? Are there any overall themes within the songs/album?
Dave has had these songs written for quite a while, so after he wrote the backbone of the songs, it was a case of taking it apart, adding/changing parts and putting it back together. Pete had most of the lyrics completed before recording with only a few changes made on the day of recording.
The lyrics are mainly taking a look at the state of social and racial divisions in life and politics but trying to look with hope for improvement the current low we are in.

Were you going for a different sound/approach on this album?
We wanted to stick to the dark and heavy sound of our last album but we also wanted to look to where we can branch out into our music. We shared a lot of other bands with each other and talked about what aspects we liked and wanted to play.
Dave based a lot of the guitar riffs on the drums and then worked into a song strong structure. We approach the songs based on the fact that we will be playing them live and we want to catch the vibe. The drums were tracked live with minimal touch ups, so that we can get that sense of live sound.

Was there any specific gear you used to capture that?
There’s no secret sauce to our recording gear. It’s the type of equipment that normally find in a hardcore punk album. Lot’s of high gain distortion, amps, Sans amp on the bass.

Is there a particular single/track that you feel captures the essence of the album?
‘Us and Them’ really highlights the sound that we were aiming for in this album. It’s a bit more melodic and mid tempo than our previous album, but it shows that progression in style that we wanted.

Is there a physical copy available? If not which digital platforms is it available on?
Physical copies will be available on CD and Cassette, via Good Times Records and will also be available digitally via Bandcamp, iTunes and Spotify.