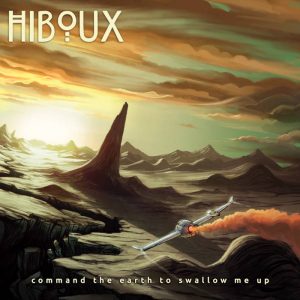 ‘New Album’ is where a band or artist answers some questions about their latest release. Up next is instrumental post rock band Hiboux, who have just released the album ‘Command the Earth to Swallow Me Up’.

When/where was the new album recorded?
Initial tracking was done at Tsunami Studios in Levin. Further tracking at our own studios in Lambton Quay, as well as Snuffleupagus Studios in Karori.

Who produced/engineered the album? How did the tracks come together in the studio, or at home?
All mixing, mastering and engineering was done with a fine degree of technical precision by Mr.Snuffleupagus at his home studio in Karori. We were really impressed with the level of his knowledge and work, and all of us learned an incredible amount from him in the process. He had the most awesome mastering room I’ve ever seen – the walls were lined with myriads of stuffed toys to create the dead-air, it looked like something out ‘The Labyrinth’. It’s a damn shame he moved to China literally a couple of days after completing the album.

How did the songwriting happen?
The initial seed of the songs normally comes in the form of classical chord structures created by Lester, which he writes at home on an un-amplified electric guitar. We then free-form jam over these in our studio and join them together, then re-hash and review until we’ve hammered out a complete song. Given our tracks always end up being so long, they take literally months to write. Standing Waves actually took a whole year to fully lock down before we performed it live for the first time.

Were you going for a different sound/approach on this album?
That came about naturally due to a change in lineup from the first EP. We lost two members (keys/guitar #2), and then gained a new player for guitar #2, so we effectively went from a 5-piece to a 4-piece, and this had a big impact on the sound. We learned a hell of a lot during the production of this album, and I think you’re definitely going to hear that knowledge come out on the next album. We’re shooting very high now & have a lot of work and strong goals ahead of us whist writing release #03.
We’re now back to a 5-piece again, having regained our keyboard player. He’s a multi-instrumentalist so it’s like adding 3 extra people to the band. Sometimes he plays guitar, sometimes synth/keys, sometimes saxophone, sometimes piano sometimes even the recorder. That thing that we all had to learn at school that I thought was the least musical thing in existence.. he even manages to make that sound good. We’re very glad to have him back.

Was there any specific gear you used to capture that?
There was a very specific drum-mic set up used with loads of different kinds of expensive microphones. A beautiful 200-watt guitar amp by M.I.Audio was used for guitar #01, along with an original Maxon 808 for baked-in overdrive. The second guitar went through an ENGL 50-watt head, also paired with the 808. The bass went through an Orange head and bass FX were also applied through software. The FX were all applied using some high-end plugins, and added with respect to the mix as a whole.

Is there a particular single/track that you feel captures the essence of the album?
It’s difficult to say because they’re all so different. If there had to be one I’d say it’d be East of Seddon. It’s the first song on the album and the first song we wrote as 4-piece, and in a way set the tone for what was to come.

Are you working on a video/videos for any of the songs?
We’ve already completed a music video for ‘Precession’, and have two more in the works, possibly even three. So keep your eyes open for those at http://www.hiboux.co.nz in the coming months.