From the Archives: Review of the Day – Spartacus R/The View 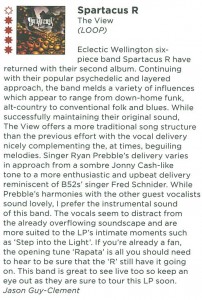 Spartacus R
The View
(LOOP)
Eclectic wellington six-piece band Spartacus R have returned with their second album. Continuing with their popular psychedelic and layered approach, the band melds a variety of influences which appear to range from down-home funk, alt-country to conventional folk and blues. While successfully maintaining their original sound, The View offers a more traditional song structure than the previous effort with the vocal delivery nicely complementing the, at times, beguiling melodies. Singer Ryan Prebble’s delivery varies in approach from a sombre Jonny Cash-like tone to a more enthusiastic and upbeat delivery reminiscent of 8525’ singer Fred Schnider. While Prebble’s harmonies with the other guest vocalists sound lovely, I prefer the instrumental sound of this band. The vocals seem to distract from the already overflowing soundscape and are more suited to the LP’s intimate moments such as ‘Step into the Light’. If you’re already a fan, the opening tune ‘Rapata’ is all you should need to hear to be sure that the ‘R’ still have it going on. This band is great to see live too so keep an eye out as they are sure to tour this LP soon.
Jason Guy-Clement

Tags: From the Archives, Review of the Day, Rip It Up