From The Archives: Rip It Up – Smokin’ In The Boys Room: Darren Watson Interview 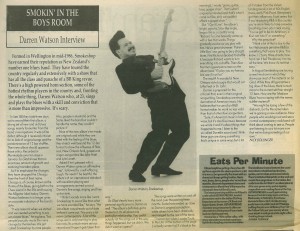 Formed in Wellington in mid-1986, Smokeshop have earned their reputation as New Zealand’s number one blues band. They have toured the country regularly and extensively with a show that has all the class and panache of a BB King revue.
There’s a high powered horn section, some of the hottest rhythm players in the country and, fronting the whole thing, Darren Watson who, at 23, sings and plays the blues with a skill and conviction that is more than impressive. It’s scary.

In late ’88 they took three days out to record their first album, a strong set of new and old blues songs, mainly favourites from the band’s live repertoire. It was a fine debut, although it received criticism for its lack of original songs and the predominance of 12 bar shuffles. Their new album should appease those critics. Recorded in Marmalade over ten days in January So Glad shows that an enormous amount of growth and maturing has taken place.

As it to emphasise the changes, they have dropped the Chicago from the front of their name.
Chicago is, of course, known as the Home of the Blues, giving birth to the Chess sound in the 50s and housing the Alligator label today. Darren Watson believes it no longer gives an accurate indication of the band’s style.

“It was relevant when we started and we needed something to say we played blues,” he explains, “but people basically made the name change by themselves. We got called Smokeshop by most people.

Also, people in Australia and the States liked the band but couldn’t handle the name, they couldn’t picture it.”

Nine of the new album’s ten tracks are originals and while they are filled with the feeling of the blues, they stretch well beyond the 12-bar format to show the influence of Stax soul, New Orleans funk, gospel and singer-songwriters like John Hiatt and Lyle Lovett.

Asked if he’s pleased with it, Darren Watson gives an affirmative “yep”, followed by a self-effacing laugh. He needn’t be bashful; the album’s of an international standard with excellent playing and arrangements centred around Darren’s fine songs, singing and firey guitar style.

“I think it sounds more like I want Smokeshop to sound like than what we have sounded like,” he says, “the last album was already out of date before it came out. This one’s a lot more contemporary. A lot of the songs we’re only learning to play live now. It’s a much more serious record and I hope it gets taken that way.”

‘So Glad’ clearly has a more personal significance to Darren as well. “The album’s definitely got a theme to it. It’s all about one particular relationship. You could actually list the songs out in the way things happened, but we didn’t. We didn’t want an opera!”

The songs were written on and off the road over the past eighteen months. Some have ended up close to Darren’s original conception, while others have been drastically rearranged by the rest of the band.

”I remember when I wrote ‘Truth In My Life’ at the bottom of the page (I actually wrote it at 3 o’clock in the morning!). I wrote “piano, guitar, bass, gospel choir”. That’s what I originally intended and that’s what it came out like, only we couldn’t afford a gospel choir.”

But “I Can’t Live”, the album’s bright, punchy, Stax-like single, began life as a country song.
“Richard Te One basically came up with a feel that works. Things gradually evolve as you play with him. He’s a great drummer. ‘Patient Little Boy’ was going to be a straight blues. First Richard decided to shuffle it, because Richard wants to turn everything into a shuffle. Then Alan Norman (guest piano man on the album) said “I’ll play you my famous lick, see if it will sit.” 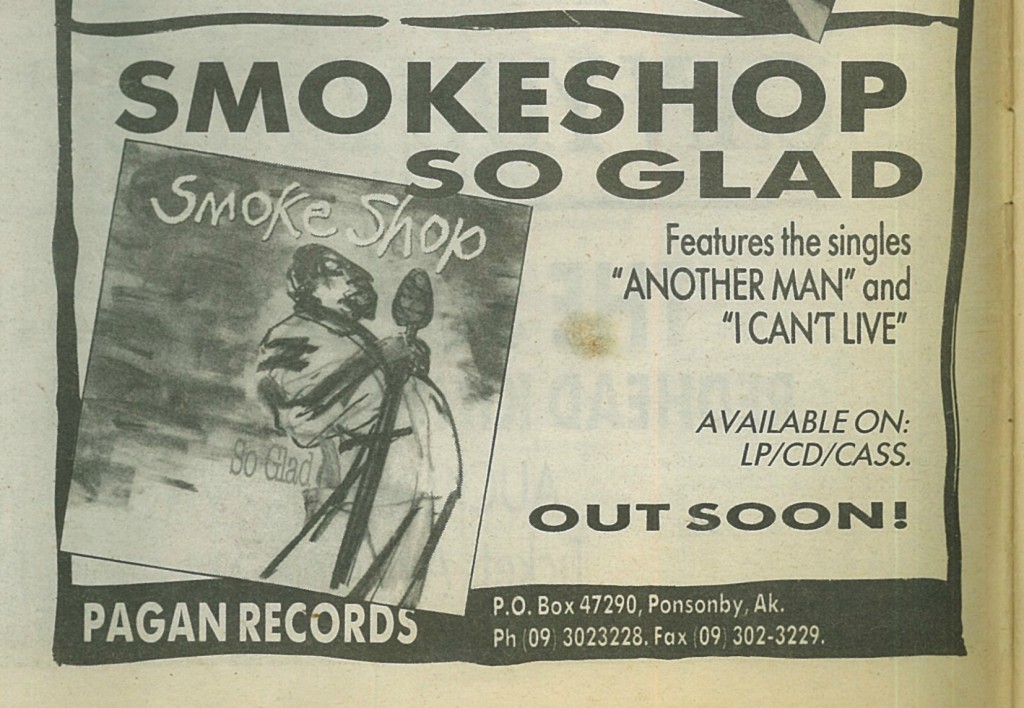 The result? A wonderful New Orleans-style boogie that would suit Little Feat or Dr John.

Darren is prepared for the criticism that, even in their original songwriting, Smokeshop are strongly derivative of American music. He believes that his use of an R&B format makes his work no less valid than that of other Kiwi songwriters.

“Sure, it’s American music in lots of ways, but it’s also Kiwi music because we wrote it and it’s about things that happened to me. I listen to the so-called Dunedin sound and I think these guys are doing something that’s unique in some ways but a lot of it’s taken from the Velvet Underground, a lot of 60s English music, early Pink Floyd. Everyone’s got their influences. It just seems that if you’re playing R&B in this country you’re more likely to have someone breathing down your neck saying “You’ve got to be an American, a Kiwi can’t do it” or something.”

“I think a lot of that is due to the fact that people perceive R&B as something that’s easy to play. You know 12 bars, three chords, how hard can it be? People say it to me all the time. We know it’s not that easy.”

In August Smokeshop are touring a new live show in which they showcase most of the material on So Glad. While they still guarantee a big dose of the blues, there is much more to the current set than straight 12-bars. How are the ‘Madison Blues’ hoons coping with the newer, subtler material?

“We might be losing a few of the diehards, but by the same token we’re gaining a new audience. Now people who would go out and see a normal contemporary rock band will think about coming to see us. People are listening to us a lot more now that we’re doing something of our own.”

Tags: Interviews, Rip It Up