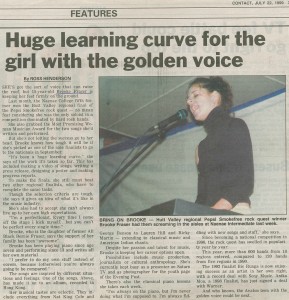 SHE’S got the sort of voice that can raise the roof, but 15-year-old Brooke Fraser is keeping her feet firmly on the ground.

Last month, the Naenae College fifth former won the Hutt valley regional final of the Pepsi Smokefree rock quest — no mean feat considering she was the only soloist in a competition dominated by hard rock hands.

But she’s not letting the success go to her head. Brooke knows how tough it will be if she’s picked as one or the nine finalists to go to the nationals in September.

“It’s been a huge learning curve,” she says or the work it’s taken so far. This has included making a video of songs, writing a press release, designing a poster and making progress reports.

To make the finals, she still must beat two other regional finalists, who have to complete the same tasks.

Though the selection criteria are tough, she says it gives an idea or what it’s like in the music industry.

She’s also had to accept she can’t always live up to her own high expectations.

‘‘I’m a perfectionist. Every time I come off the stage I kick myself . . . but you can’t be perfect every single time.”

Brooke, who is the daughter or former All Black Bernie Fraser, says the support of her family has been “awesome”.

Brooke has been playing piano since age seven and performing since 13 and writes all her own material.

“I prefer to do my own stuff instead of covers, because otherwise you’re always going to be compared.”

The songs are inspired by different situations and feelings. One of the songs, Above, has made it on to an album, recorded in Hong Kong.

Her musical tastes are eclectic. They include everything from Nat King Cole and George Benson to Lauren Hill and Ricky Martin – extending to classical music and American Indian chants.

Despite her passion and talent for music, Brooke is keeping her career options open.

Possibilities include music production, journalism or cultural anthropology. She’s currently kept busy as a presenter on Saturn TV and as photographer for the youth page of the Evening Post.

There’s also the classical piano lessons she takes each week.
“I’m always on the piano, but I’m never doing what I’m supposed to, I’m always fiddling with new songs and stuff,” she says.

Since becoming a national competition in 1999, the rock quest has swelled in popularity year by year.

The 1992 finalist Bic Runga is now enjoying success as an artist in her own right, with a record deal with Sony Music. Anika Moa, a 1998 finalist, has just signed a deal with Warner.

And who knows, the Avalon teen with the golden voice could be next.

Grateful acknowledgement to Fairfax Media for letting us use this material.