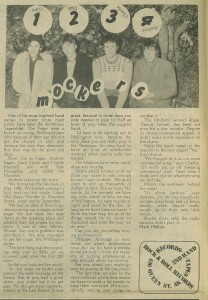 One of the most inspired band names in recent times must surely have been the Ambitious Vegetables. The Veges were a bunch of young Wellingtonians who because of their age did not get the chance to play and develop the way they deserved. But that was in the good old days.

Now, the ex-Veges, Andrew Fagan, Gary Curtis and Charlie Mannell, are with Dale Monaghan, and called the Mockers.

Andrew takes up the story:
“We formed as the Mockers in May 1980. We started playing in July, and our first single, ‘Good Old Days’ / ‘Murder In Manners Street’, came out in September.

“We had no idea of how to go about putting out a single at that stage. We just took our tape down to the pressing plant and asked if they did singles for anybody. It was all very Mickey Mouse. Our major problem was distribution. We only managed to get the single into Wellington shops.

“The best thing was the recording only cost us $350 so we covered costs after the first 200 sales.”

So did you look for live work?
“At that stage we hadn’t even played! We were working on the theory that if you had a good demo, you could use it to get gigs. We did get some supports, mainly at the Last Resort. It was great, because in those days you only needed to play for half an hour if you were the support band.

“I’d hate to be starting out in Wellington now, because the only place you can really play is the Terminus. It’s very hard to have an hour of worthwhile material when you’ve only just started.”

The Mockers have never really done any touring.
“We’re afraid to tour until we think our name is well enough known,” says Andrew. “We don’t want to end up thousands of dollars in debt, like so many NZ bands. At the moment we have day jobs, which is why we stay in Wellington. It’s easy to play at night and work in the day, as long as we don’t have to travel. I think the best way for us to do things would be to move to Auckland and exist the way we do now.”

Are you afraid you might go stale by staying in the one place?
“The fact that we play to the same audience all the time means we have to work a lot harder to keep them interested. We’re continually writing new songs to combat it.”

The Mockers’ second single, ‘Trendy Lefties’, has been out now for a few months. Despite its strong commercial appeal, it didn’t make much impression on the charts.

Were the band upset at the reaction to the new single? “Yes,” they chorus.
“We thought of it as our most commercial song,” says Charlie.
“It’s really put us off releasing commercial stuff. Next time I think we’ll just do whatever song we feel like.”

What’s the sentiment behind the song?
“It’s about factions,” says Andrew. “It’s the way everybody accuses everybody else of being trendy, when they’re really caught up in their own little trends.”

Maybe that’s why the radio stations didn’t play it.