From The Archives: Rip It Up – The Black Seeds/Another Chapter 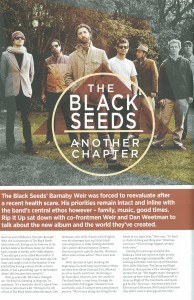 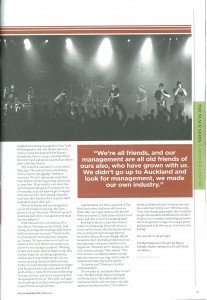 The Black Seeds – Another Chapter

The Black Seeds’ Barnaby Weir was forced to reevaluate after a recent health scare. His priorities remain intact and inline with the band’s central ethos however – family, music, good times. Rip It Up sat down with co-frontmen Weir and Dan Weetman to talk about the new album and the world they’ve created.

Near the end of February this year, Barnaby Weir, the co-front-man of The Black Seeds had a close call. Sitting across from me at the kitchen table in his Petone home, he thinks back a couple of weeks, still visibly shaken. “I recently got a virus called Myocarditis. It attacks the heart. I woke up the other day, felt dizzy and caught a cab to the hospital. It was kind of like having a minor stroke or heart attack. It was a good thing I got to the hospital when I did, because they sussed it.”

Only 33-years-old, Weir has a changed air. “lt’s kind of a blessing in disguise,” he continues. “lt’s a reminder that it’s a good time for me to calm down a bit.” Sitting to the left of him is The Black Seeds other frontman, Dan Weetman, who with a beanie pulled tightly over his afroesque hair, and thick black rimmed glasses, is today looking decidedly like a darker skinned Jemaine Clement. Interjecting with a gentle chuckle, Weetman offers some serious advice: “Have some kids bro!”

With the start of April marking the beginning of a week long, six-territory release for their new album Dust and Dirt, followed by a five month world tour, the timing is far from ideal. However, over the course of The Black Seeds 12 year foray through the soundworlds of alt-reggae. cinematic funk and Pacific soul, it’s always been a reactionary process. “We’ve been doing this thing for the whole of our adult lives,” Weir says. “It’s hard to think of doing anything else,” Weetman continues. “When things happen, we deal with them.

Having five years ago accepted that holding a fixed line-up for an eight person band would be nigh on impossible, while working with their core line-up of Weetman, Weir, Mike Fabulous, Tim Jarray and Nigel Patterson, they operate with a rotating brass section line-up. “The biggest major changes to the line-up were when Brett McKenzie left to focus on Flight of The Conchords, and thank god he did,” Weir says. “And then when Rich [Christie] and Shannon [Williams] left because they didn’t want to play gigs all the time.”

Coupled with strong management from Triple M Management, who also handle Lawrence Arabia, Conan Mockasin and The Phoenix Foundation, they’ve set up a situation where the entire band and operational staff are able to draw a fulltime income.

“We’ve been in that space for a wee while,” Weir says. “We realised you’re not making money if you’re not gigging,” Weetman continues. We can’t take people away from their families for too long though, family has to come first. What is pretty cool about this upcoming tour though is it’s compacted into five months, so by the time we get to August, everyone can have three months of quality time with their family, which is pretty much unheard of in any other job.”

“We’re all friends, and our management are all old friends of ours also, who have grown with us,” Weir says. “We didn’t go up to Auckland and look for management, we made our own industry.” 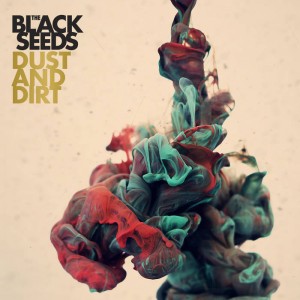 With Dust and Dirt, a record that Weir describes as “two years in the writing, road testing, planning and recording,” they look to build on their past successes. “Traditionally, live has been the most important thing for us,” he says. “It’s been where we’ve built our audience. But we’re better at recording now, and we’ve been doing it ourselves.” Working in their own studio space at Mount Cook, they let their long term recording/engineering collaborator Dr Lee Prebble sit this one out, instead utilising the pool of skills existing within the band. Mixing rocksteady—era reggae with blaxploitation funk, instrumental dub, synth driven p-funk, Weir’s country/folk song- writing and voice, and even a surprising foray into garage/surf rock on ‘The Loose Cartilage’, the record builds on their existing soundworld of good friends and good times.

I ask Weetman and Weir a question: If The Black Seeds were a hallway with doors on either side, how many doors would there be? Weetman replies. “I think there will be a lot of doors, and they will still be building more.”
Both had so much to draw from when it came to writing songs from experience, or about real life events, that during the sessions they actually put down enough material for another album. For now though, they’re focused on their impending release and tour, and adapting to the music industry in the digital era. “Normally we’re chasing our tail with overseas releases,” Weir admits. “This time we have a worldwide release over ten days, an extensive tour to go with it, and all without any major label involvement.” “It’s pretty cool!” Weetman chuckles enthusiastically.

Twelve years in, and despite Weir’s recent scare, The Black Seeds show no real signs of slowing down. Their philosophy stays centred on family, and even more critically, appreciating what you have. “To be able to record an album, release it overseas and tour the world, that’s pretty cool,” Weetman says. “If we were doing a gig tonight, there would be people who would be excited about it all day. I always try to remember that feeling and never take it for granted on stage. You can get pretty disillusioned with life easy, so I hold onto that feeling.”

Dust and Dirt is out 9th April. The Black Seeds tour kicks off 24th May in Dunedin. Head to ripitup.co.nz for a full list of tour dates.